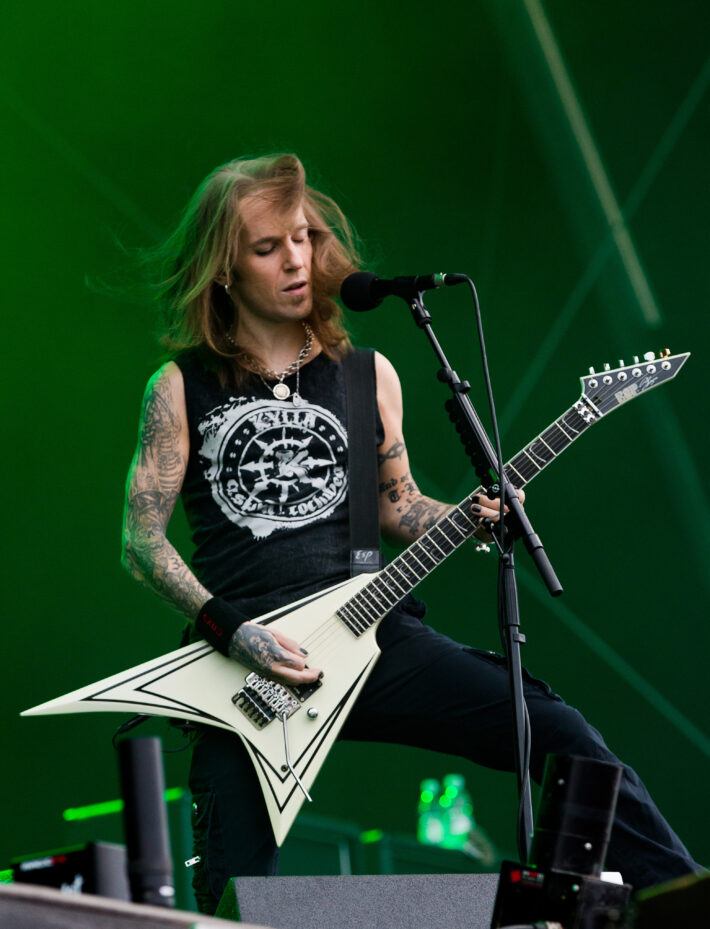 The first time I heard the solo at the end of Sixpounder I had to pause and play it back ten more times. I couldn’t believe it–it was a musical sequence as exciting as any I had heard. I was only twelve at the time, but even now, fifteen years later, I am still in awe whenever I hear Alexi Laiho’s playing. I caught Children of Bodom live for the first time on the Blooddrunk tour in 2008 and to this day, it was the most fun I’ve ever had at a metal show. Alexi was a titan on the stage, and he dominated the arena with his playing, and his vocals, and his energy and stage presence. The performance was how I imagined music used to be in the 70’s and 80’s when rock and metal were dominant pop genres that commanded enormous audiences and cultural attention. I was still coming down from it days later. Turns out, that was just the Wild Child effect.

When Children of Bodom’s first album, Something Wild, was released, Laiho was only eighteen years old. The recording was raw, but it oozed talent from every position, especially that of the lead vocalist, guitarist, and songwriter. Bodom then skyrocketed from promising to prodigious with their second work, 1999’s Hatebreeder. Hatebreeder was, and is, a whirlwind of everything that makes metal great: it’s angry, explosive, rapid, and yet, somehow, beautiful and meticulous. Alexi Laiho, then 20 years old, managed to blend elements of classical music, black metal, and 80’s hair metal into one of the defining entries in the melodic death metal canon. Every lead, riff, and solo were evidence that their creator was a prodigy.

With the release of their third record, Follow the Reaper, a year later, Children of Bodom ascended to stardom in their native country of Finland. Laiho’s playing on that album deservedly drew attention: he was performing at the level of the guitar giants of the era, and he was still only 21. His leads were fast, technical, tasteful, and flashy. The music he wrote was infectious in its energy and harmony. The next two Children of Bodom records further established the band as a force internationally and by 2005, Alexi “Wild Child” Laiho was a full-blown star, appearing on magazine covers (including famously standing between Steve Vai and Zakk Wylde on the front of the Guitar World 25th anniversary virtuoso issue), in instructional videos, television shows, and movies. Children of Bodom’s music had fully penetrated the metal scene internationally and was featured in several major films and video games. But none of it came at the expense of Laiho’s sincerity as an artist. He did not revel in the spotlight, only in the celebration of the spirit of heavy metal, of which he was a living manifestation. Indeed, Wild Child was known to live up to his nickname both on and off the stage, famously being a fan of alcohol, reckless behavior, and debauchery. In many ways, Alexi was one of the last true rock stars–his live performances were electric and many of his touring adventures were non-stop alcohol-fueled parties. He was synonymous with youth, excitement, and impetuous joy, and was an icon of the freedom, artistry, and righteous defiance that embody the spirit of heavy metal.

As an artist, Alexi leaves behind a legacy matched only by the greatest musicians of his generation. Few guitarists in history have accomplished as much. His adoration for metal was evident in his playing. He was not a stylistic revolutionary on the guitar, but he excelled in adapting differing styles and influences into brilliant fusions, performed with technical expertise. His screaming leads were reminiscent of 80s gods like Randy Rhoads and Eddie Van Halen but he also played with the neoclassical precision of shred lords like Yngwie Malmsteen and Vinnie Moore. And yet, there was often a flavor of angry blues in his playing as well, and everything always worked together–so well, in fact, that with the songs he wrote, Laiho was able to take extreme metal, one of the most historically countercultural genres of music, into mainstream levels of success. Six of Children of Bodom’s final seven albums reached number one on the Finland album charts, and five pierced the incredibly competitive U.S. Billboard 200, reaching as high as #22. But commercial success is only evidence of Laiho’s greatness–it never defined it. His true legacy is in the thousands of kids who have picked up guitar because they heard his solos, and the millions of hours that listeners have spent lost in his music, the way I was when I played that Sixpounder solo on a loop fifteen years ago, and the way I still am today whenever I fire up Hatebreeder.