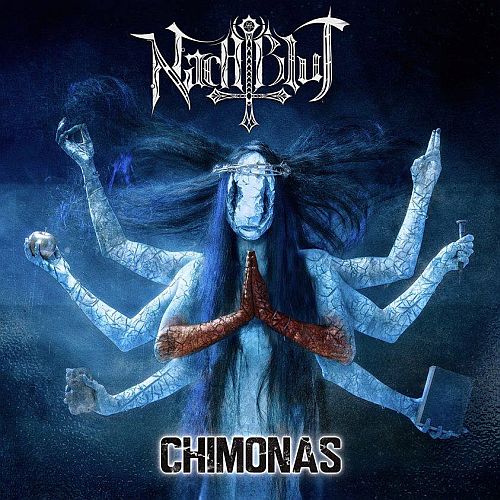 A great mix of Gothic Ballads and Black Metal smashers: Nachtblut just released their fourth album, Chimonas. Their musical progress from one release to the other brought them a contract with the Austrian label Napalm Records. Their sound got better and better with every album and now their releasing this masterpiece. This one is definitely their best effort so far and makes you want more. Napalm describes this album like this: “Songs as black as the night, texts from bitter cold reality, steely guitars, sublime fanfare and whipping drum grooves”. And their absolutely right. With their charismatic frontman Askeroth they vary between low growls and high screams. There’s a lot of melancholia on this one, but without forgetting to be as heavy as possible. To me it sounds quite suitable for the mass, though. I don’t mean that in a bad way, I think it is a great album and even people who are not from the metal genre should listen to it, maybe guys and girls from the Goth or Emo scene should give this album a chance. They won’t be disappointed, because there are quite a few melodic ballads on it. Of course there are still well written socio-critical lyrics on this album, but there are many songs about unrequited love. Now, let’s look a bit deeper into the songs.

Alright, like I said, there are those straight forward Black Metal songs, but there are also quite melodic, melancholic ballads. A lot of piano is used, fitting perfectly in between the steely, Rammstein-like guitars. The vocals are mainly growls and screams, I would love to see a couple more parts with clean vocals, because I think they would fit well and improve the melodic parts. The lyrics are incredibly well written. They are about religion, society and apparently even about love. The whole thing starts with a quite heavy song, called “Gotteskrieger”. It has a lot of double bass, fast guitar work and aggressive vocals. The chorus is quite catchy, this is one of the songs on which I’d like to hear cleaner vocals in the chorus part. I think there aren’t many people who think like this, but I do. The following four songs are the best of the album, the singles “Wien 1683” and “Wie Gott Sein” are extremely suitable for the mass, especially the latter. And I’m not saying they are commercial, because they simply aren’t. Nachtblut didn’t try to make it poppy, they just came up with quite melodic goth metal ballads. I have to admit that they’re not quite as heavy and aggressive as on their previous releases, but I think they made a great progress. “Wien 1683” is about the Turkish siege of Vienna. The history freaks will know more about this. I’m not into history at all and I honestly don’t care. The only thing I know is that this one’s a powerful song, almost Sabaton-like. I don’t love every single song on the album. There are a couple that just don’t do anything for me, like “Schwarz” and “Chimonas”. To me they sound like two generic melodic black metal songs with a couple of piano parts in it. I’m more into the songs with dark lyrics and atmosphere, for example “Kalt wie ein Grab” that deals with Necrophilia. Heavy, almost industrial riffs, with a spooky deep voice. Another great song is “Töte mich” that talks about a terminally ill man who wants to die and asks somebody to kill him. Pretty heavy stuff. The album ends with the title song. Not my cup of tea, I would have preferred if they put “Dort wo die Krähen im Kreise fliegen” at the end of this awesome record.

I immensely enjoyed this album and I would recommend this to anybody who likes dark, spooky music. As I said, even Emos/Goths should give this album a chance. There are some beautiful ballads on this one. Nachtblut improved with every album and there’s no end in sight. This album makes you want more stuff like this, better than drugs. I’m going to play this up and down in the next months. I discovered these guys recently and I was told they’re going to release a new effort soon. I listened to it and was instantly a fan. I hate to give such high ratings, but 2014 seems to be a great year in music. My favorite tracks are “Wie Gott sein”, “Wien 1683”, “Kalt wie ein Grab” and “Und immer wenn die Nacht anbricht”.