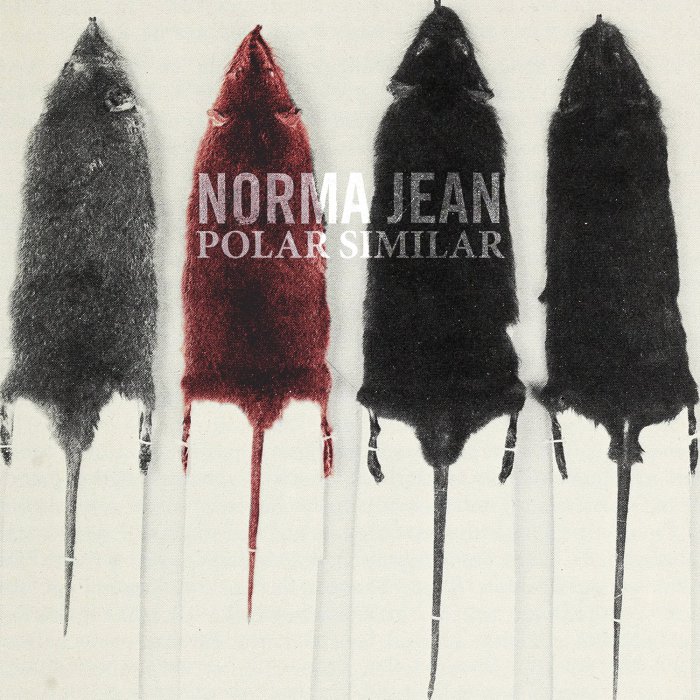 Seven full-length albums, one name change, and a Grammy nomination for Best Recording Package. Two compilation albums, one EP, and two record labels. Thirteen music videos, twelve different band members for recording sessions, and a platter of raw steak at the coffinspire. Well, the last one might be a bit of a stretch – but few metalcore bands have a pedigree akin to Norma Jean, and even fewer have survived the test of time without breaking up or completely switching musical styles. Polar Similar, the band’s seventh original album, is a nod to this consistency.

I’ve had the pleasure of following the band since The Anti Mother release. It was an interesting time to come on board, as many fans were undergoing spasms at the melodic and even pop-oriented content of that album. It was a new direction for the band, and it still retains its aura of displacement to this day. But it was an important milestone in the band’s history. That album led to a new era for Norma Jean, and while some fans and critics still attest that nothing will replace the Bless the Martyr and O’ God days, the band’s partial evolution has helped shape their sound over the past eight years and has kept them relevant in a time when most consider metalcore to be dead.

Polar Similar begins with “I. The Planet,” the first song in a quartet of sonic offerings that ultimately concludes with the album’s progressive opus, “IV: The Nexus.” “I. The Planet” is a concept song with a few repetitive lines that sink into the back of your head. One of the things about Norma Jean that always peaks my interest is their use of singular lyrical lines of memorable quality. The line, “What you’re feeling is the loneliness of God” gets stuck in your head, while at the same time it reveals Norma Jean’s penchant for philosophical musings.

The next two songs are typical Norma Jean offerings. While “Everyone Talking over Everyone Else” showcases the band’s relentless appetite for down-to-earth, blow-your-ears-out metal, “Forever Hurtling Towards Andromeda” features a catchy chorus that will have you humming along in no time. Then Norma Jean introduces a groove-laden track in “1,000,000 Watts” that recalls songs from the band’s discography such as “Liarscenic: Creating a Universe of Discourse.” There’s a laid-back vibe to this song’s chorus that’s a bit grungy in nature.

Then the listener is thrown into “II. The People,” which features a carnival-esque introduction filled with repeated numbers. Honestly, the first time I had to double-check to make sure that I was still listening to the same album. The song, while a bit quirky, brings to mind a cheeky comedy horror film like “Killer Clowns from Outer Space.”  But it’s random moments like this that make Norma Jean stand out above the crowd.

Then it’s back into the heat of things with the burn-the-house-down song “Death is a Living Partner.” It’s short and sweet, but filled with a truckload of angst that will have you banging your head along in no time. The next track, “Synthetic Sun,” features some of the most energetic and creative guitar riffs on the album. This pairs well with the rhythmic drumming and shrieked vocals. “Reaction” begins with sweet bass riffage that segues into one of the strongest tracks on Polar Similar. A homage to the band’s Meridional days, it features vocalist Cory Brandan using that perfect, gritty voice that rests somewhere between singing and growling.

The third part of the quartet comes in tones of subdued atmospheric guitars that wouldn’t be out of place on a Maylene and the Sons of Disaster record. One gets the feeling of leaning up against the side railing of the coral in an old Western, watching the denizens of the town move about to the Saloon and the General Store and back again, all while under the sleepy influence of the setting sun.

The next few tracks are blazing renditions of metalcore. I want to stop for a moment and focus on the song “A Thousand Years a Minute.” This piece does an excellent job of using dynamic contrast, as heavier parts of the track are interspersed with more melodic sections. The band also continues its tradition of using a soundbite at the end of this song – the tornado is coming, so watch out! It’s an excellent transition into the album’s closer, “IV: The Nexus.”

This isn’t the first time that Norma Jean has released a monster of a track in terms of length. Even on their first album, there was a track clocking in at over 15 minutes! It’s on “IV: The Nexus” that the band’s progressive tendencies shine. Most core bands wouldn’t even consider writing a 10-minute track, but Norma Jean nails it. Between the thumping bass guitar and the driving, atmospheric guitars, there’s a very Trenches-like aura to the song. “IV: The Nexus” is a fitting closure to Polar Similar.

Norma Jean is here to stay, undeterred by the vagaries of the metal scene. Polar Similar is an endearing album interspersed with hardcore tenacity, melodic vivacity, and progressive creativity. While there are a few moments where the band slips into familiar territory a bit too often, Norma Jean fans and fans of metal in general will no doubt find many moments to enjoy on Polar Similar.