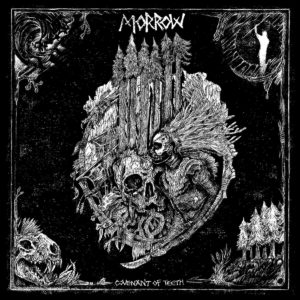 Emboldened by a lucid vision of a post-apocalyptic society in which the Norr people cling to the earth through the memories of the past and the heightened promise of the future, the collaborative Crust group Morrow have released their debut album, Covenant of Teeth. Featuring elements of Crust (hardcore, punk), black metal, and melodic metal, the London-based group draws from their respective experiences in bands such as Anopheli, Wildspeaker, Monachus, and Archivist, among others. Considering that these bands furnish various sounds and reflect multivalent influences, it is in some ways remarkable that Morrow has come together as a tight, cohesive unit. Overall, Covenant of Teeth is a satisfying sonic experience that presents a conceptual framework best given a thorough listen in its entirety. Morrow is more concerned with quality over quantity, which is refreshing in today’s world of radio singles and three-minute tracks which ape the same chorus or rhythm repeatedly. Moreover, the production quality and mixing on the record is spot-on, eclipsing some of the members’ own bands.

The record beings with the track “Fathom.” There is haunting singing in the background which immediately brings forth images of an ancient Norr warrior hunched over flaming wood on a bitterly cold night, chanting and spreading his hands over the fire to garner warmth. This warmth spreads throughout his body, gives life to his limbs, and sets sparks of vitality in his eyes. Once animated thus, he begins to tell a story, to project a vision of the future. This introduction is set beautifully by the haunting tones of a cello, which permeates Covenant of Teeth with a warm, mellow sound, offering a stark contrast from the heavier strains of the electric guitar. “Fathom” grows into a solid opener featuring low growls and systematic drumming. The band expertly weaves dynamic contrast and tempo changes into the music, and the listener is also given their first taste of atmospheric black metal shrieking.

The record continues with “The Norr,” and the listener is once more back at the fire across from the proud, old warrior. The crackling flames and acoustic guitar at the beginning segue into spoken voices. Are these voice from the past, or from the future? They are strange, in another language, but somehow they convey meaning. Then the listener is hurtled into 9 minutes of whirling drums and gurgling bellows. While this song initially wears its hardcore influences on its sleeve, there is also something uplifting in its energetic drumming, and the underlying cello convinces the listener that this is a horse of a different color.

The third installment on Covenant of Teeth is perhaps the best offering on the entire record. The song “Forgiving Grin” meshes melodic and harsh elements extremely well, and this diametric approach vis à vis the poignant imagery of teeth gives the song an endearing vibe. (One can only assume that the Norr have a cultural obsession with teeth. But don’t we all? After all, how would we eat, otherwise?) The atmospheric nature of the guitar on this song meshes well with the haunting vibrations of the cello, which is in turn juxtaposed against jarring, on-point drumming.

To each journey comes an end, and “Cleaved Fang” gladly bears that onus. The warrior leans back against a log and stares deep into the flames, and his final words are both a warning and a promise. The promise can be felt through the atmospheric vibes of the guitar at the beginning of the song; the warning is experienced when the listener hears the sorrowful tone of the cello and the whispered lines of Spanish vocals. There is some great tragedy which might have been averted, a world-shattering event which has shaped the Norr people into what they are today, in this future world.

Morrow delivers on their debut full-length album Covenant of Teeth. The hidden gems on this record are no doubt the heartfelt voice of the cello and the energetic drumming. If one examines the finished product minutely, no doubt there are some flaws. The spoken voices, while interesting, sometimes take too much of a backseat, or aren’t used to their full potential. The guitar sometimes gets stuck in the same riff for an overtly long period of time. In the future, perhaps the band could move a bit more beyond its influences. But the finished product, taken as a whole, is a refreshing rendition of Crust peppered with moments of punk, hardcore, and extreme metal. Fans of Crust in general, or fans of bands who often deal with Native American culture, such as Cormorant, will enjoy Covenant of Teeth. Now there is only this image left, seared into one’s memory: the old Norr warrior grunts in approval, spreading wide his blackened teeth in a humorous grin. But the night is now over, and the embers of the fire hiss and crackle. The fire is out, the story has been told, and the listener departs, energized and renewed…