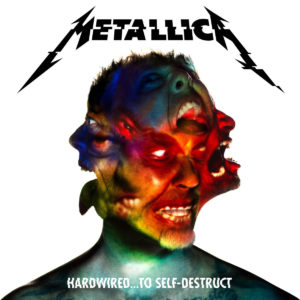 If there’s a household name in metal, look no further than the band Metallica. The Los Angeles-based thrashers have been releasing albums since 1983 with their ground-breaking record Kill ‘Em All, and haven’t slowed down much since. It’s hard to say whether Ride the Lightning or Master of Puppets was their most influential thrash album, but somewhere along the way, Metallica decided to focus on a larger audience and dropped much of their thrash roots in favor of hard rock, to the chagrin of many hardcore fans. Nevertheless, some of Metallica’s most successful albums, including Metallica (The Black Album) and Reload, were released during this time.

The present era of Metallica arguably begins with the band’s previous effort Death Magnetic. The band’s ninth studio album met with mixed reception, as it blended the previous styles of the band and was a cross between the thrash metal of their early days and the hard rock groove of their middle years. Metallica continues in this vein on Hardwired… To Self-Destruct, but with more varied song structures, better production quality, and more dynamic contrast. The legends fall flat, however, in terms of consistency. It’s something that has plagued the band on more than one release. Metallica is better at creating hot, spicy singles than in crafting long, enjoyable albums.

The release of Hardwired… To Self-Destruct was heralded around the world with the debut of a music video for each song on the album. While not all of the music videos are equal in quality or impact, it’s a stunning propaganda machine. Whatever else you think about Metallica, it’s hard to deny that they’re very good at selling and promoting their albums. But the question remains: does the album live up to the hype? For most, the answer will be yes. Songs with catchy choruses and streamlined production like “Atlas, Rise!” and “Moth Into Flame” will appease fans of Metallica’s hard rock era, while the blistering assaults of “Hardwired” and “Spit Out the Bone” will transport the listener back to Metallica’s glory days. “Spit Out the Bone” is a seven-minute sonic intrusion in which Kirk Hammett shreds his guitar with a speed and ferocity known only to the gods of metal who dwell outside of time and space. It’s arguably the best song that Metallica has released in a decade. Throughout Hardwired… To Self-Destruct, James Hetfield proves he’s the Johnny Cash of the metal world, as his vocals have only become stronger with age. It’s an accomplishment in and of itself, as many of his peers have either retired or given up as their vocal chords can’t handle the daunting and exacting task of being a metal vocalist.

For the die hard fan who is expecting another Master of Puppets, keep waiting – because you’re likely never going to get it. The band has moved on, so I suggest that you do, too. That’s not to say that there isn’t a fair amount of criticism to throw in Metallica’s direction. With two physical discs clocking in at 77 minutes and 29 seconds, the album is quite long. That’s a turn off to a lot of fans. While Hardwired… To Self-Destruct boasts some monster singles, it also drags with some rather repetitive numbers. “Halo on Fire” seems to be an attempt at a Maiden-esque epic such as “The Thin Line Between Love and Hate,” but it mostly comes across as an insipid bore that has the listener wanting to hit the skip button more often than not. The second disc of the album is much shakier than the first. “ManUnkind” is a bit tacky in its delivery, while “Here Comes Revenge” should likely be renamed “Here Comes Filler” as it sounds exactly like any number of Metallica songs over the years. The second half of Hardwired… To Self-Destruct does somewhat recover with the stabbing, groove-laden “Murder One” and the thrash opus “Spit Out the Bone,” but it’s still a difficult journey to get through.

Metallica exceeded my expectations on Hardwired… To Self-Destruct, and while every fan is relieved that it isn’t another Lulu, there are some glaring inconsistencies on the album. If you’re on the edge about whether or not to buy the album, a good strategy would be listen to it online. If you like enough of what you hear, purchase it in its entirety. Otherwise, just buy the singles that you enjoy the most. With the advent of their newest album, it’s apparent that Metallica still has some gas in its tank. Hardwired.. To Self-Destruct is a strong blend of thrash metal and hard rock that showcases Metallica’s penchant for writing powerful, resonant singles.