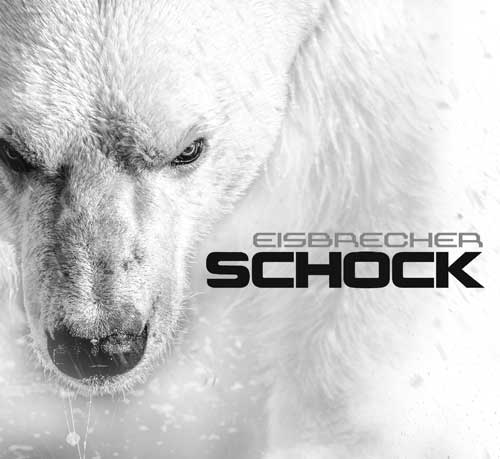 German industrial metallers Eisbrecher just released their sixth studio album, called “Schock”. You don’t know Eisbrecher? If not, you’re not very familiar with the Neue Deutsche Härte, are you? Together with Oomph! and Megaherz they are the leading forces in modern German Industrial Metal. After the singer Alex Wesselsky left the band Megaherz (which he founded in 1993) because of musical differences in 2003, he decided to found a new band with the name “Eisbrecher”. The musical direction should be a bit more towards Electro Metal. Eisbrecher consider themselves a rockband with quite a few electro elements. Soon they became as big as Megaherz. Since then they’re always being compared to each other. After the mixed reviews regarding their previous album, let’s see how this one does.

People who didn’t like the previous album, “Die Hölle Muss Warten” because it was too commercial won’t like this one better. It’s definitely not one of their heaviest, most skull crushing albums, but it’s extremely well-conceived and elaborate. You can tell it’s an Eisbrecher album right from the very beginning: dark synthesizers, industrial guitars and Alex’ distinctive straight forward German vocals. Songs like “1000 Narben” which is about the scars you get in life and how you shouldn’t regret those and “Schlachtbank” which talks about heart-ache and the end of a relationship, are unrecognizable Eisbrecher songs, how we like them. The title track reminds me of Marilyn Manson’s newest effort. It’s full of rock n roll and blues elements. The first single “Zwischen Uns” is a dialogue between Alex and a woman, talking about a relationship and how the man would do anything to keep it alive. The female voice fits perfectly and improves the song quite a lot. “Rot Wie Die Liebe” is basically a better version of the title track of their previous album. A slow, yet beautiful ballad. I didn’t want to mention Rammstein in this review, but I have to. The riffs of the songs “Dreizehn” and “Unschuldsengel” remind me of the rip-breaking, cold as ice riffs from Rammstein. Another strong track is called “Nachtfieber”. It’s not like the usual industrial metal songs, it’s extremely poppy and I think this one’s gonna be played in gothic clubs all over Germany. My favorite tracks are “Zwischen Uns”, “Rot Wie Die Liebe” and “Nachtfieber”.

There are no enormously big hits I could point out, but it’s one of the strongest albums I’ve heard in quite a while. You can tell they’ve really put a lot of heart and even more brain into this. I’m sure it’s gonna go far in the charts. There aren’t too many new elements to be excited about, but it’s an extremely well-produced and well-wrought album. But the next album shouldn’t go too much into the Unheilig-direction and become too soft. For now, all I have to say is, hats off to this band. They really managed to establish themselves as an important band within the German Gothic / Metal scene. This album is a must have for all Eisbrecher fans, lovers of German Industrial Metal and even the ones who are more interested in the whole Dark Wave thing.