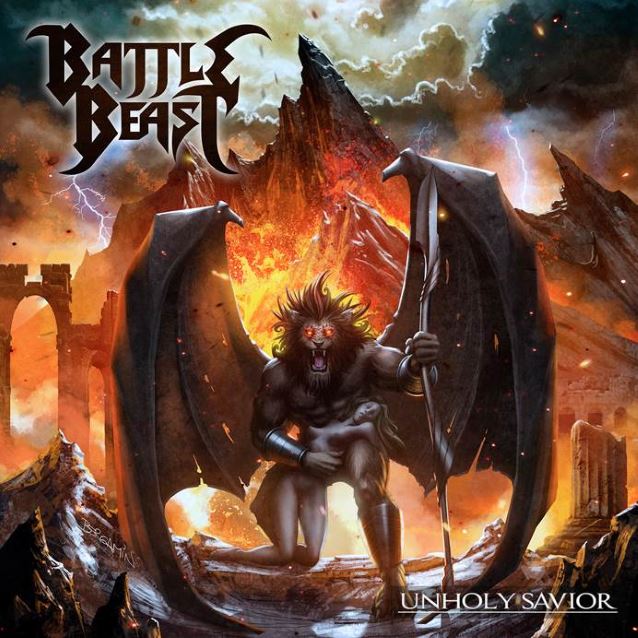 The guys and the girl from Battle Beast just released their third album, called “Unholy Savior”. After listening to their previous, self-titled effort, I had to check this out as quickly as possible. It’s their second studio album with the singer Noora Louhimo. I have to say that I prefer her voice over the one of their old frontwoman. After being founded in 2008 in Southern Finland they keep delighting us with their epic riffs and powerful vocals. Listening to their songs feels like a journey back to the 80s. Well, at least I think it does, I wasn’t even alive then. But I think I can imagine that time quite well, thanks to their albums. Their self-titled album was a real masterpiece and they tried to outweigh it with this effort. Did they succeed? Let’s see…

The album starts out with the song “Lionheart”. I think there are some interesting elements in it, but the repetition of the chorus just gets annoying with the time. The chorus comes on again and again and you just hope the song will be over soon. Same thing with the title track. But after that things seem to get a lot better. “I Want The World…And Everything In It” is definitely one of their strongest tracks, ever. It takes you to a world full of soaring guitar solos, classic rock and punk rock, really back to the roots. With all those straight-forward fast pace songs, they didn’t forget to include calmer tracks like the ballad “Sea Of Dreams”, “Angel Cry” or the poppy “Touch In The Night”, which is my absolute favorite track of the whole album. It’s an 80s upbeat ballad with a lot of synthesizers. I’m sure many of you won’t like this one at all, because it’s not “metal”, but I think there’s something magical about it. The complete opposite to these songs is “Speed And Danger” where they go a bit into the speed metal direction. Extremely fast and aggressive. Then there’s the instrumental “Hero’s Quest” and the acoustic “The Black Swordsman” and another quite strong track “Far Far Away”. My favorite songs are “I Want The World…And Everything In It” and “Touch In The Night”. Is this album as great as their previous one?

It’s a rock solid album, but I have to admit that I’m a bit disappointed. The expectations were high after listening to their awesome self-titled album. Don’t get me wrong, this album isn’t bad by any means, but I think it can’t reach the glory and epicness of its predecessor. They could have experimented a bit more and some songs just sound too generic. If you want to travel back in time and experience the 80s for a couple minutes, this is definitely the album to buy. It’s worth a buy even if you’re a Power Metal enthusiast, ’cause you can’t have much more power than on this effort.