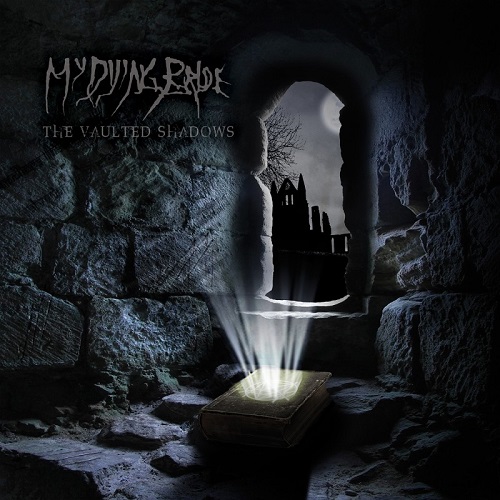 Ah good ol’ Aaron Stainthorpe and the boys, still pining over love lost in the moors/dark castle/grave yard/haunted forest/witch burnings. And after all these years and a lot of albums and compilations, they still have not lost their touch in setting a haunting atmospheric sound stage as soon as you press play.

Good ol’ My Dying Bride, along with Anathema and Paradise Lost, they bridged the gap between the aggressive and hateful vocals styles of Death metal, with the melodic, atmospheric, picturesque depression that is Doom metal. I remember many many many moons back in the early 90’s when I first stumbled onto the Doom/Death metal crossover. I was growing tired of the whiny vocals of Candlemass, and looked for something with a little bit more aggressive, demonic feel to, while still retaining the “tune low, play slow” atmospheric sound that is the trademark of Doom metal. So with luck I stumbled unto the 3 horseman of the death/doom crossover : My Dying Bride (Trinity), Anathema (The Silent Enigma) and Paradise Lost (Christendom).

My mind was blown! Here were bands that kept the soul of doom but with black fingernails clawed out of the coffin of death. From then on it was just black candles and poetry filled with longing and graveyards. But alas, as with all things, bands change. Paradise Lost started to bring more electronic sound into their compositions (Draconian times were the last of the great albums). Anathema became more and more experimental in their sound, and morphed into a “Pink Floyd-esque” metal band. But My Dying Bride, kind of remained the same, except for the vocals. With Angel And the Dark River, Aaron moved to a more clear vocal track. Away from the guttural deathly growls, and more into a voice of despair and yearning.

So after all the verbal diarrhoea, on to the Band that is My Dying Bride. They started in 1990 in Bradford, England. And to date they have released eleven full-length studio albums, three EPs, one demo, one box set, four compilation albums, one live album, and one live CD/DVD release.

So to the album at hand, “The Vaulted Shadows”. This is a compilation album that is basically “The Barghest o’ Whitby” EP and “The Manuscript” EP combined (My Dying Bride loves their compilation albums). The Barghest was released in 2011 and contained only one song, the title track. And its a long one, running at just over 25 minutes. Manuscript was released in 2013 and contained 4 songs. All the songs on the album are between 4 and 9 minutes, except The Barghest O Whitby which is running at almost a hefty 30 minutes, so its by no means a quick listen. Barghest is also the opening track, setting the mood with some ambient winds blowing before the heavy crunchy guitars feed the intro to definitely some standard My Dying Bride trademarked violins. This recipe has never faltered them in the past and gives them their distinct sound. The ambient soundtrack being steered by distorted guitars, and then fed by melodic violins has been the signature of their discography all these years.

I like the vocals on Barghest as it hankers back to their original albums, a nice devilish growl, Aaron then intermixes it with some clean vocals to mostly move the story along on this first track opus. Apparently the song is a culmination of myths and superstitions from the Yorkshire area.

Because most My Dying Bride albums are almost concept in nature, as in there is a single theme running through them, you can distinctly tell that Barghest was from a different album when the second song; Manuscript starts. It definitely has a different feel and style to it, It definitely feels “lighter” in mood and feeling, which I kind of like, especially after the marathon that is called Barghest.

In the end it comes down to, My Dying Bride being excellent musicians and songwriters, it creates a very polished list of songs. But in the end it is just a compilation, re-release of a couple of previous EP’s. This all leaves me with a kind of feeling of “Meh”. They are great, but its just a rehash, its not really something new (well after 11 studio albums, nothing is really new). I think the reason I feel indifferent to it, is because its compilation of songs that were released not to long ago (2011 and 2013). If you are already a My Dying Bride fan, chances are, you already have the two albums mentioned. If you have never heard of My Dying Bride, and want to start somewhere, its a fine compilation to begin with (Although I still feel Trinity is the best compilation, as it contains the magnificent track :”The Sexuality of bereavement”), it will give you a good feel of the “newer” clean vocal sound as well as their good ol death vocal sound, all hashed into one.