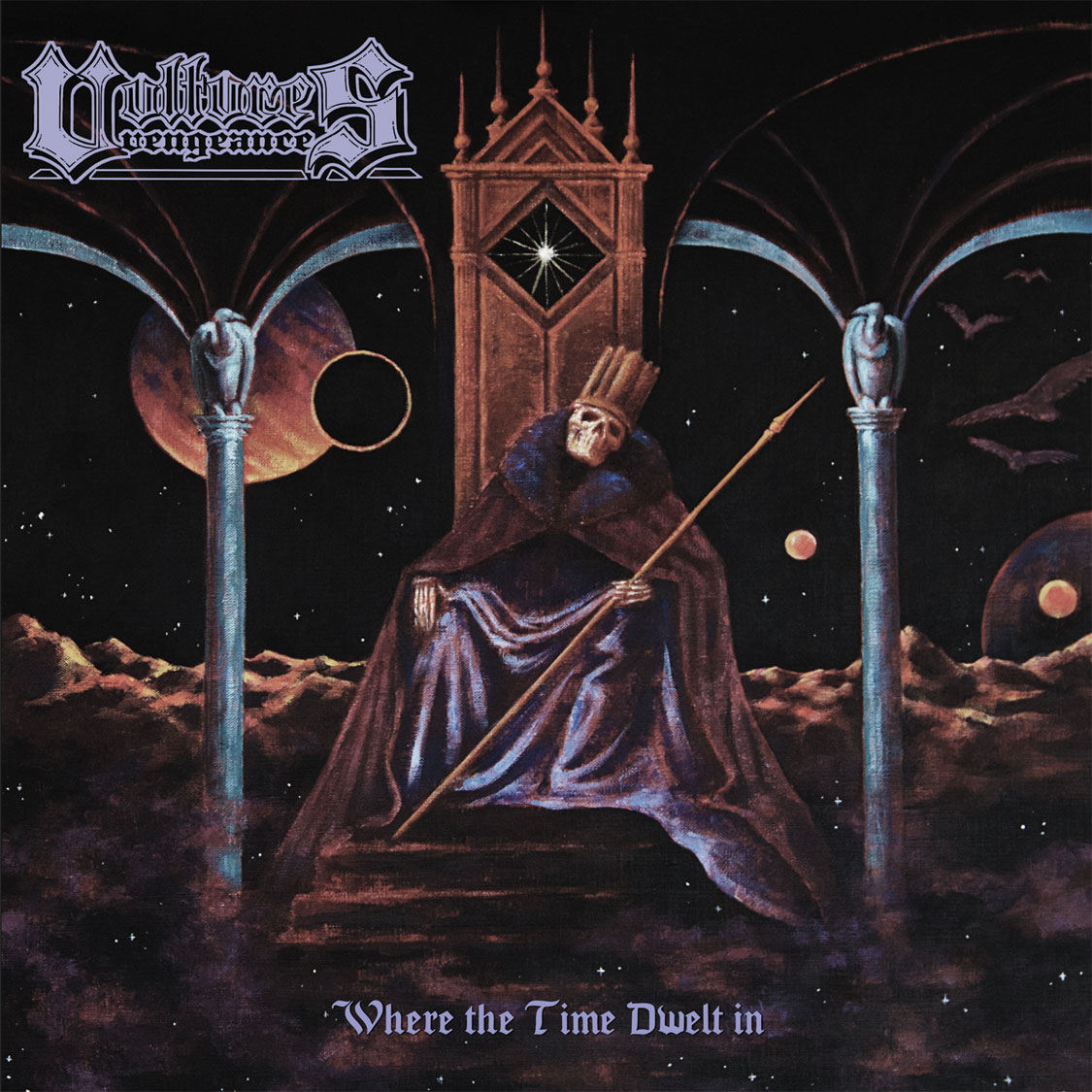 Prepare to be transported back to the late ’80s, when band likes Iron Maiden, Motörhead, and Def Leppard pioneered the new wave of British heavy metal, taking audiences by storm and captivating the hearts of a generation of fans. Italian band Vultures Vengeance attempts to capture this sound and image with their debut album Where the Time Dwelt In. The band wears its influences on its sleeve, most notably drawing from a well-stocked reservoir of Iron Maiden sounds and gimmicks. Everything that made classic Maiden stand the test of time – passionate, gritty vocals; soaring, melodic guitar riffs; thumping, memorable bass lines; and rustic, down-to-earth drumming – can be found on Where the Time Dwelt In.

But before the ship sails for her maiden voyage, let’s attempt to plug the leak in her hull, because she’s taking on water.

There’s a notable problem with this record, and it’s one that plagues many bands with few resources. That problem is production. The quality of sound on the record is incredibly poor. Quite frankly, it sounds as if it was recorded in a garage or basement. After reading the band’s bio, I was amused to find out that it actually was recorded in a basement. Now, don’t get me wrong. I understand the argument for authenticity; that to recapture a musical era, some bands try to recreate a nostalgic atmosphere and sound. But in this case it comes off as an album that was recorded on a low-budget in the late ’80s, rather than an album attempting to give tribute to the ’80s.

As such, it’s difficult to get into the album at first. There’s also a volume level problem, so you’ll have to jack up your speakers while listening. In addition, some of the translation from Italian to English didn’t go so well. It’s a pet peeve of mine. I suppose it comes from being an English teacher. But I’d rather have the album in Italian than see common grammatical mistakes such as omitting or misusing prepositions in song titles. Even with all of these impediments, however, the final verdict isn’t completely doom and gloom. There’s a lot of talent to go around on Where the Time Dwelt In, if you’re willing to look beyond its faults.

Vultures Vengeance begins the album with a short instrumental. The atmospheric guitar segues neatly into the first main track, “A Curse From Obsidian Realm.” The listener is introduced to galloping riffs reminiscent of classic Iron Maiden, and there’s some solid guitar soloing on this song. The maniacal laughing at the end of the track fits late 80s heavy metal to a T.

On the second song, “And the Wind Still Screams His Name,” the listener gets a good taste of Tony Steele’s formidable pipes. It might be too soon to say he’s the next Bruce Dickinson or James Hetfield, but he has undeniable talent. There’s a real gritty tenor and admirable range to Steele’s voice. Heck, with a last name like Steele, how could you not become a metal vocalist?

But it’s on the track “On a Prisoner’s Tale” where it all comes together. Without a doubt, this song is the album’s “Hallowed Be Thy Name.” Starting off with a soul-shattering melodic riff, the song swings into a thrashy rhythm that is accentuated well by the pounding drums and bass guitar. The atmospheric outro on this song is superbly performed – and just when you think it’s over, there’s that heavenly riff again, soaring in from the nether regions where the gods of rock ‘n’ roll dwell. If the band could write all of their songs in this manner…

Vultures Vengeance chooses to end the album with an instrumental, something that as a critic and listener I’m not fond of. You want to leave the best possible impression on your listener, and having your vocalist sit for the final number is like having the starting quarterback benched on a third and long in the fourth quarter. Nevertheless, the album’s title track is a chippy number that lets us hear a bit more of the bass guitar.

If 80s metal is your thing, and you’re willing to give the band a shot, remember that it will take more than one listen to get into the music fully. Where the Time Dwelt In is a rocky debut album, but a knowledgeable metal head will be able to pull a few precious stones out of this diamond in the rough. Vultures Vengeance is one band that I’m going to keep my eye on, and I hope that they get the opportunity to get signed to a larger label with more resources in the near future.

1. End of the Void (Intro)
2. A Curse from Obsidian Realm
3. And the Wind Still Screams His Name
4. On a Prisoner’s Tale
5. Where the Time Stands Still

Norma Jean - Polar Similar Review
Milestones of the 2010s
Albums That Grow On You? - Discussion Video #4
My Dying Bride - The Vaulted Shadows Review