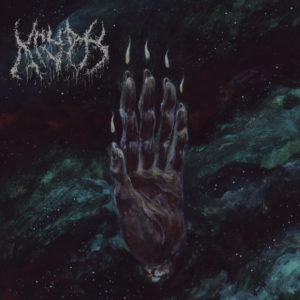 Like a great winged beast clawing its way out of the darkened abyss, death metal band Krypts serenades the listener with the atmospheric monolith that is Remnants of Expansion. The sophomore effort from the band delivers a harrowing rendition of traditional death metal interspersed with moments of lingering dissonance and light strokes of doom metal.

Krypts does an outstanding job with the mood, or atmosphere, on Remnants of Expansion. It’s certainly a hallmark of advanced songwriting and it delivers a deliberate punch of gloom and doom to the record. One might conjure up Cthulhu rising unmolested from his keep, Lucifer from Milton’s epic winging his way through the starry abyss, or the fiend Grendel munching greedily on the butchered bodies of men-at-arms. One caveat to an impressive record is the mixing of the vocals. In more than one spot they get buried under the pounding drums and writhing guitars, so that it’s difficult to distinguish them. In the end, it’s a minor note and a matter of preference.

Remnants of Expansion begins with the epic track “Arrow of Entropy.” True to its namesake, the song pierces the heart with a full helping of misanthropic death metal. Dissonant riffs surge into a thumping bass line, and then the guitars spasm in an avalanche of chords as the main section of the song kicks in. The bridge to “Arrow of Entropy” exhibits some of the best drumming on Remnants of Expansion and serves as fuel to propel the song forward to its ten-minute finish.

“Withering Titan” evokes the giant Cronus breaking free of his chains in Tartarus and attempting to claim his place as ruler of the universe. The churning guitars are his great, loping strides as he crosses the cosmos; the relentless striking of the drums are the vicious swipes of Cronus’s blade as he castrates his father. Greek mythology aside, the shifting tempo and chaotic diatribe of sound that Krypts unleashes on this song is truly astonishing.

Then it’s on to the title track of the album, “Remnants of Expansion.” Krypts demonstrates a unique ability for merging dark and light elements of melody on this track. It’s almost as if the listener is exploring the event horizon of a black hole, or cavorting wildly in the distant gases of nebulae eons of light years away.

After the calmness of “Remnants of Expansion,” “Entrailed to the Breaking Wheel” startles the listener with some tense bass hits as it begins. The song is an adrenaline-pounding trip that will have you wanting to jump into the mosh pit head first. Some of the best guitar playing on the record is displayed on this song as well. Remnants of Expansion finishes with the song “Transfixed.” It’s a fitting closer to a strong record, as the song has an old-school death metal vibe that is only emphasized by the shifting tempos that twist like the many-faceted scales of a winding serpent.

The album art of Remnants of Expansion suggests a ghostly experience outside of space and time, and the band delivers on that promise. While the name Krypts might be currently known only to an underground of loyal fans, they have the potential to be a household name in the death metal world. On their sophomore album Remnants of Expansion, Krypts stays true to their sonic roots while pioneering a cathartic blend of death, doom, and dissonance. Honestly, it’s a shame that the album isn’t longer.  If you’re a fan of bands like Behemoth or A Hill to Die Upon, or regularly spin death metal legends such as Amorphis, Death, or Sepultura, you won’t be disappointed by Remnants of Expansion.

1. Arrow of Entropy
2. The Withering Titan
3. Remnants of Expansion
4. Entrailed to the Breaking Wheel
5. Transfixed