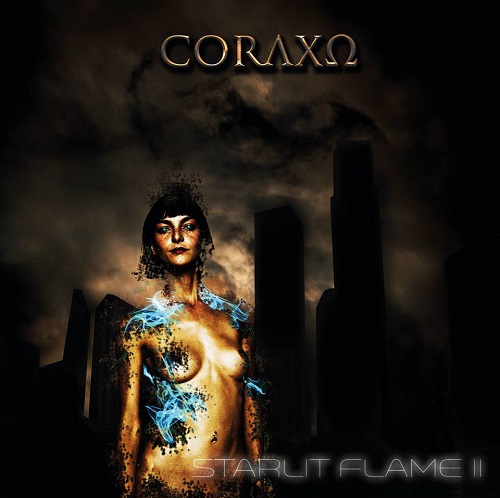 Here we go with another review for an underground band’s EP. Another review submission I got a couple days ago. This time the band’s called Coraxo, heading from the legendary Tampere, Finland. Coraxo consists of Tomi Toivonen(vocals, guitars, synth), Ville Kokko(bass) and Ville Vistbacka(Drums). They combine their death metal with an electronic element that is inspired by science fiction and horror movies and TV of the 1950’s to 1970’s. The band was formed in September 2013. This one’s part two of the EP trilogy, which tells the tale of how an alien nanomachine race infiltrated the Earth of the 25th century, and the battle for survival that ensues. It was recorded and mixed by Coraxo during Jun-Sep 2014, and was mastered in Sep 2014 at Unisound Studios Sweden by the one and only Dan Swanö. You might say Electronic music and Death Metal don’t work out very well mixed together. Stay calm, I assure it does work very well. I think there will be a lot more bands in the future to mix Electro sounds with Extreme Metal. The story of this EP revolves around the society on Earth 300 years later after the first part. The remains of the ship of part 1 crashed into the ocean, and the nanomachines started to spread through the ecosystem. Part II consists of separate stories and timelines during the crisis of the discovery and the civil war that ensues. Let’s get to the musical part. The EP contains five songs, plus intro. First off, I gotta say that I’m not a huge fan of Sci-Fi movies or Sci-Fi music. The music sounds like Fear Factory meets Scar Symmetry. I think this one is even more futuristic than Scar Symmetry’s last effort. And I have to admit that I’ve enjoyed this one a lot more. This one’s a lot more straight forward and there are no unnecessary gimmicks in it. Coraxo are able to keep the perfect balance between heavy, old school death metal and the melodic electro sounds. There’s a lot of Groove and Industrial influences in it. It’s a perfect mix of many genres. My favorite songs off this one are The Bastion and Tangier. I think the contrast could be even bigger and it would still work completely fine. The death metal parts could be more brutal and the electro hooks even more melodic and ecstatic. If you’re a fan of Groove, Death, Industrial or Experimental Metal, you definitely have to check out this one. Overall this one’s a more than decent effort. I’m sure we’ll hear a lot more from this awesome band. Music like this keeps metal alive!