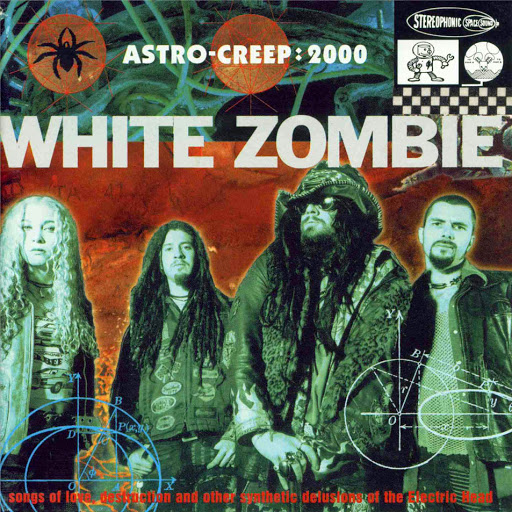 White Zombie is, somewhat unfortunately, primarily associated with Rob Zombie. After the band’s dissolution other members’ musical careers were mostly sporadic and staggered, while Mr. Zombie’s solo act enjoyed enduring success, later also starting a notorious yet decently prosperous film-making career. Still, while Mr. Zombie is a key character in the whole ordeal, he is not the only factor. When you look at the wider context, there is a very interesting story to tell with White Zombie, about the music business, its trends and bands’ place within. So let’s get to it.

Of course, first a few words about the key man himself. Whatever you think of Rob Zombie and his music, films and other arts he’s dabbled with, you can’t deny he has immense creative capacity, regularly creating remarkably dense pastiches from a huge spectrum of influences residing in his horror-addled mind. All of this started with White Zombie, his first creative outlet, and one in which are already present many elements that regularly appear in his career. It’s the obsession with all kinds of horror media, well-known or deeply obscure, paired with a penchant for vintage American culture and both old-school Hollywood and grindhouse aesthetics (think an edgy Quentin Tarantino), and ultimately resulting in an almost psychedelic effect achieved through a sensory overload of piled-up significations of the aforementioned. His aesthetic is one of the defining elements of White Zombie as a band (and also found fertile ground in music trends to come), one which he expanded further in his solo act. It was a continuation of the White Zombie sound, and Astro-Creep 2000 especially being a bridge between the band’s earlier grungy sound and Mr. Zombie’s later polished and intricately produced music.

But let’s start the story at the beginning. White Zombie is a band who worked hard before they got their break. Founded in 1985. A bunch of demos’, EP’s and two full-lengths released up until the beginning of the 90’s. Their early sound was as garage as it gets – raw as hell mish-mash of noise rock, punk, groove rock and what have you, already stamped with the Misfits-esque horror-slasher vibe, albeit much coarser in both execution and principle. I don’t have qualms about concluding that it wasn’t much to awe at – mostly sounding like kids wanting to make as much noise as possible. Nothing wrong with that, but when the kids grow up and write some proper songs, this stuff tends to be forgotten.

Well somebody concluded those kids were up to no good, and that it was worth money. You see, the music business was vastly different than what we’re acquainted with in the internet era. Bands nowadays don’t really sit around and wait for their “big break”, which in those days meant a major label noticing you and signing you to their roster, usually meaning financial lifeline coming your way. If that investment performed well, it was no longer just a lifeline, it was big moolah and with it the dream of the rockstar lifestyle being within your grasp. White Zombie got their big break. Their first truly great album, “La Sexorcisto: Devil Music Volume One”, was a big hit. It was recorded upon being recognized and signed by Geffen, a now dissolved label which was a subsidiary of Universal, and which released music by Aerosmith, Guns‘n’Roses and Blink-182. This was the age when rock was at its commercial peak and when huge music companies lavishly funded bands directly. This isn’t a thing today, but back then it was the dream.

Back to the music. “La Sexorcisto” was much more metal than what White Zombie did previously. The nascent groove metal trend was very palpable here, delivering tight riffs and rhythms while their garage and noise rock legacy turned into regular effect-laden guitar antics. Overall, it was a mature album that didn’t forget its ragged legacy. As mentioned, it was a hit, pleasing their big label overlords and bringing great boons. And then once again we hear the ever-repeating story – success ripped the band apart. While the details can be found in various chronicles of the time, the basic story goes – Rob Zombie’s ambitions drove a wedge between him and the band, as he drove to exert even more creative control. By the end, it was mostly a group of people refusing to talk to one another, yet still recording and touring. In this atmosphere of high tension, a beast was born, and that beast was Astro-Creep 2000.

As it were, Rob Zombie took control of the resources provided by the label, knowing exactly what to do with them. He publicly stated that he wasn’t satisfied with “La Sexorcisto”, stating that it was “the best they could do with what they had at the time”. Well this time he had more, and he was prepared to realize his vision at any cost. White Zombie’s old drummer, Ivan de Prume, was replaced by former Exodus and Testament member, John Tempesta. Charlie Clouser, a collaborator of Nine Inch Nails, Killing Joke and Marilyn Manson was brought on to do keyboards for the album. Finally, the producer was chosen to be Terry Date, who not only had experience with 80’s heavy metal (Metal Church, Sanctuary, Liege Lord), but has at that point produced certain 90’s metal classics (Pantera, Prong, Deftones), and would later go on to produce important nu-metal records (Limp Bizkit, Slipknot, Korn). All the ingredients were present to create an iconic album.

And so it was. Released in ’95, Astro-Creep 2000 was a landmark of heavy music, though perhaps unfortunately overshadowed by Rob Zombie’s future success. Yet its significance must be stated. The somewhat subdued production of “La Sexorcisto” was turned up to 11. Everything was louder, punchier. Tempesta’s demonstrated that he can both thrash and groove when necessary, and for this his drums were made prominent and piercing. Yseult on bass and Yuenger on guitar were given immense gain, from which they formed immense chugs and distorted wizardry. As well-measured the drum-guitar-bass triangle performed, what truly elevated the album was the production. Effects, electronics and samples were used lavishly. Rob Zombie frequently switched vocal styles and drove them through various filters. The final result was an album with a strong metal backbone but twisted into a psychedelic industrial romp. It was thus not only the most ambitious and experimental sound of White Zombie, but also that of Rob Zombie, whose solo music continued with the same aesthetic, but retreated more towards familiar rock music forms.

As it was, the band dissolved soon after. Their final legacy being an album that I believe is paradigmatic of what was going on with bands at the time. From the commercial side of things, in the 90’s there was a general shift in rock towards more brooding, introspective, and even more edgy music. The hair metal golden goose was abandoned for being old and desiccated. In its place, thrash, the other side of 80’s metal, was being appropriated into more market-friendly forms such as groove metal. Labels were quick to capitalize on various types of alternative rock music – industrial, alt-metal, grunge, all got their place in the spotlight. The final culmination of this, a strange amalgam of all these 90’s styles was the final hoorah of commercial metal – nu-metal in the early 00’s being all the rage, Roadrunner records signing bands left and right and throwing huge piles of money into production and tours.

White Zombie’s Astro-Creep 2000 was one of the progenitors of this development. Expensive production sessions with labels paying for top-notch personnel letting artists run wild with their edgy and dark creative visions, resulting in either incoherent overproduced messes or something truly unique. Big money thrown at marketing and commercialization (for instance, why “More Human Than Human”, Astro-Creep’s lead single was commonly found in commercials, movies and video games). Young bands being suddenly showered in popularity and wealth slowly caving in under the pressure, ending friendships, careers and in the severest cases even lives. The story of White Zombie became paradigmatic in the nu-metal era. Their legacy was not only their influential sound and aesthetic which many bands at that time took to, either through creative influence or label demands, but also the material conditions of being a successful metal musician. However, that era was also the swansong of commercial metal. The business model of huge labels and huge contracts was no longer tenable for rock. Few of the most popular bands manged to continue having somewhat prosperous careers (Slipknot, Korn, etc), but many were left to the wayside. When that well dried up, metal slowly returned underground where it thrived ever since. The age of great labels was over as the internet age offered musicians other means of expression and conducting business.