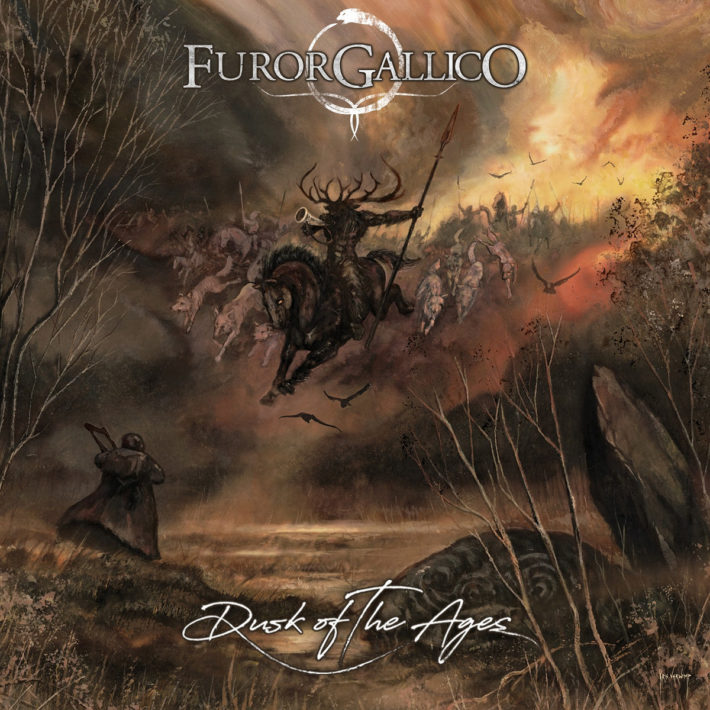 Welcome to 2019! May this New Year bring lots of great moments and even better metal.

Folk metal is an interesting blend of metal.  Mixing instruments and musical characteristics that are hundreds of years old with a genre of music that’s been around for only fifty years is not an easy task.  Not only are folk and metal two different worlds, they are also two different frames of mind. Dusk of The Ages is the third venture into this unique style.  It has some tough competition with already established albums.  Does it hold up? Can it stand on its own?

Right off the bat, this album doesn’t offer anything new, which isn’t always a bad thing. Within the first few bars of “Passage To A New Life” all of the typical folk metal characteristics are present; thrashing drums, driving guitars, harsh vocals, and a myriad of folk instruments that I don’t know the name of.  Throughout the album, the band displays its ability to effortlessly mix the multitude of different instruments without feeling out of place. “Aquane” and “Dusk of the Ages” on the latter half of the album are great examples of this.

Furor Gallico really shines with the tracks “Canto D’Inverno” and “The Sound of Infinity”.  Maybe I’m a sucker for “non-metal” tracks such as these, but I can’t help but feel that there was some real care and effort put into them.  Without having to add bombastic drums or guitars, these tracks feel more like a song, a piece, as opposed to a display of musicianship. Both these songs feel more complete and more satisfying than other tracks on this album.

Despite some of the good things found on this album, there is a lot it seems to be lacking.  My biggest complaint is the fact that all of this music has been done before, and in most cases, better.  I truly hate saying this about a band, because you don’t have to reinvent the wheel to make good music, but after getting through this album, I couldn’t help the feeling of wanting to go listen to Eluveitie instead.  Not only does Furor Gallico contain similar instrumentation, but even the “Beauty and the Beast” vocal approach seems to be lifted from an Eluveitie record. It’s one thing to wear your influences on your sleeve, but not much on this album is unique enough to separate this band from someone else who is doing the same thing and executing it better.

The other major issue I had with this release was the inability to hold my attention throughout the album.  Sure there were some stand out tracks, but they were separated by songs that were somewhat lackluster. As I mentioned before, the ballads are really well done, and both the opening and closing tracks contain a ferocity that isn’t found elsewhere on the album.  I think this complaint ties into the previous paragraph, where someone else has written this music better. I can’t pinpoint why I feel this way, because this band are clearly veterans to writing this kind of music. My issue is more in the songs as a whole, rather than their abilities as musicians.

That being said, this isn’t the worst album to be released in 2019.  There are some gems to be found, and this will fill the void until the next Eluveitie record.  Its biggest downfall is that there are other records that do the same thing better. Even still, this band is comprised of competent musicians and that is something that shouldn’t be dismissed.  Hopefully the next album takes them even further.