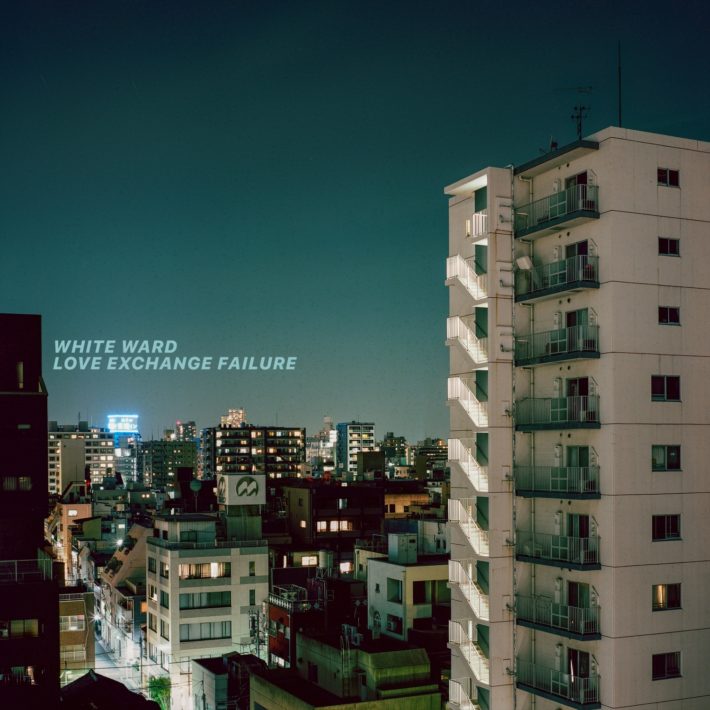 The cover for Love Exchange Failure stares back at you. In the foreground, there is a plain white rectangular building with a single light on. The entire building is bland, every floor virtually identical (the top three windows are slightly different, but not enough to break the monotony). Nothing sticks out or captivates you about this building, except for the solitary light. This one light stares away from the concrete, busy, claustrophobic world behind it with plenty of brightly shining lights, and stares into the disconnected nothingness in front instead. Back at you.

I’m probably over-analyzing the cover to an absurd degree. The cover artist probably got a shot of an urban area, purposefully bleak and impersonal, but with the lights being completely coincidental. But I hope that the intention was there. It certainly fits the existential darkness of this album.

Love Exchange Failure, the second full-length album from the jazz/black metal fusion band White Ward, is a dismal, bleak experience. The metal sections are full of desperate anger. The jazz sections are full of resigned depression. The album starts with police sirens and ends with people screaming at each other in another time. There are no true happy moments anyone near this thing. Love Exchange Failure can be downright exhausting to listen to.

Although this is a jazz/black metal fusion album, good portions of the album fuse the two genres about as well as oil and water. This seems to be an intentional part of the commentary about the relationship of humans to ourselves and our surroundings. According to the band:

“The idea behind this album is to illustrate the artificial conditions people created to contradistiguish themselves to nature. Being neither a separate phenomenon nor a sustainable part of the surrounding environment, we’ve pushed ourselves to a constant struggle caused by the inability to understand who we are and what our place on this planet is…Under the term ‘love’ we mean not a feeling in its primitive understanding but a feature that helps us to live in harmony with ourselves, other people, and the world around. The love exchange failure leads to an inevitable degradation and degeneration. The more hatred we push towards people around us, the deeper we fall…Furthermore, obsessed by their desires, [people] don’t even pay enough attention to their children, rising each new generation more exposed to mental problems. Blindness, indifference, and domestic abuse, bullying in schools, social rejection, and many other factors lead to many tragedies of mankind. Caused by individuals, they are our own crimes.” The music throughout the album reflects this idea perfectly. There are no answers on any of these contemplative tracks, only declarations of pain.

When the two genres do mix, the result is excellent. White Ward has apparently spent the two years since the band’s previous release Futility Report perfecting their craft. Gone are the moments where it seemed that they were playing a fusion genre for the sake of playing a fusion genre; almost all of the passages on this album are captivating without needing to use novelty as a prop.

Nothing is perfect, Love Exchange Failure included. There is an annoying high pitched frequency that shows up a few times, most prominently near the end of the second track Poisonous Flowers of Violence. The sirens at the beginning of the album are distracting when driving. Too often throughout the album White Wards will play a single note, a minor or diminished chord, or a dissonant chord, let it sit for a few seconds, let the air clear, and then repeat it (See the beginning of Surfaces and Depths for an example); this was interesting the first few times but it happened often enough that it became normalized and boring. The track Surfaces and Depths is a bit weaker than the rest. However, none of these deficiencies significantly altered the listening experience (Well, the last one did. Luckily, Surfaces and Depths is the second shortest track on the album, clocking in at a little over six minutes, and it isn’t bad. Just a step below the other songs). More problems may surface over more repeated listens, but the album deserves and will get those listens.

Love Exchange Failure is an absolute masterpiece, but it isn’t for everyone. Despite everything, most of the tracks are still eleven-plus minute long pseudo-avant-garde black metal/jazz fusion songs. It doesn’t matter how good the music is, some people will fail to exchange love for this album for that reason alone. Additionally, listening to this can wear you down. This is not music to just have on in the background unless you want to be distracted and depressed with whatever you are doing. Lastly, this is an album that takes time to grow. It has gotten better with every listen, but that means it started out as sounding merely very good. If these don’t sound like monumental stumbling blocks to you, listen to this amazing, poignant, contemplative work of art. Love Exchange Failure is worth the attention it demands.