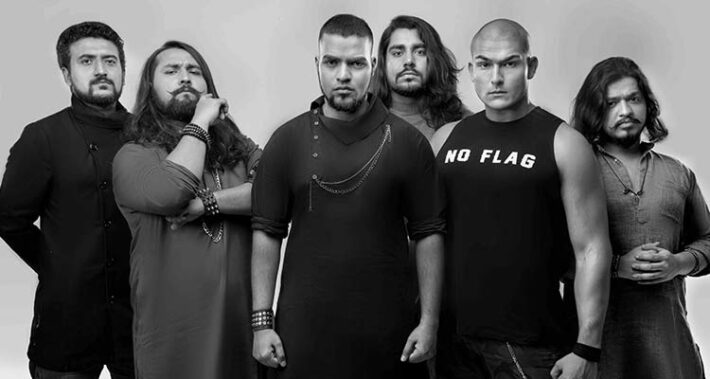 They have conquered a solid online popularity and played tours and festivals, but now it’s time for a proper album: the guys from Bloodywood are back with their explosive mix of alternative metal and Indian folk music, and their debut album Rakshak is ready to show the world what the band’s all about.

Hi, Rick here! Who am I talking to, and what is your role in the band?

Hey Rick! My name’s Raoul and I’m the rapper.

I – and many other metalheads – first heard the name Bloodywood in 2018 through Ari Ari and your cover of Tunak Tunak Tun on YouTube, both of which were quite the sensation at the time; what has happened in these years?

Yeah that was a wild time! We used covers to discover our sound and build an audience, the two tracks you mentioned were the last two pieces of the puzzle. Since then we’ve focused completely on original music, performed at festivals and played a sold out tour across Europe. Right now we’re building up to the release of our debut album!

Additionally, Rakshak features some songs you had already released online, but Ari Ari isn’t among these, why?

That track and music video will always be very special to us and our supporters, but with the album we wanted to only include our original music. We’re still going to perform it live though!

You have always paid attention to social causes, and your lyrics have always reflected this concern; now, you’re releasing Rakshak, an album whose title means “protector”. What is it, and who, that you wish to protect? Can you tell me some of the messages that can be found in this album?

We’ve met so many people who give us hope for a better world, both in our personal and professional lives. One of the reasons we make music is because we believe it can be a catalyst for change and that it has the indirect ability to create a better world because of the influence it has on us.
The album is about a joint effort to protect people and the planet as a whole from all the challenges we’re facing. We hope to do this by eliminating the challenges altogether, because the best defence is a great offence. You’ll hear messages about divisive politics, corruption, toxic news, sexual assault and bullying, as well as personal ones about battling depression and pushing your limits.

Bloodywood had been involved in many initiatives, such as giving away counselling sessions; do wish to do something similar in the future? Do you already have any plans?

Definitely. This is something we would always like to do with our work, we’re in the middle of planning our next initiative with the release of a single from the album at the moment. Going beyond the music and building on its message in a way that creates a real world impact has been one of the most rewarding feelings in our careers so far. This link between initiatives and music is further proof of music’s ability to change the world.

What’s it like, being a metal band in India? How is the local scene? And how does it feel to be one of the most, if not the most popular metal band from your country?

The scene here is small but strong! Even though most gigs have a small attendance, there are some very special nights where the whole scene comes together, we were fortunate to be a part of a night like that the last time we played live in 2019.
In terms of being well known as a band, it’s definitely a good feeling to make an impact globally. We’re in uncharted territory, we’re loving every second of it and we’re going to push the limit as far as it’ll go. We hope our journey inspires other bands in India to form and take their shot!

Musically speaking, how did you put together the traditional Indian instruments and rhythms alongside the classical metal sounds? Was it challenging?

It was! The whole thing was a result of plenty of wild experimentation, understanding the audience’s response and finding the perfect balance. Once we discovered the sweet spot a whole world of possibilities opened up. It’s still a challenge to find new ways to fuse the two, but we’re very happy with the direction we’re heading in. We think you’ll hear plenty of that on the album!

And finally, what are Bloodywood plans for the future? I know you have a tour planned…

Thanks a lot to Raoul and all the guys from Bloodywood for the time! Rakshak will be released on February 18th, 2022 and a Europe tour will follow and you can pre-order it on Bandcamp. Don’t forget to follow the band on Facebook and Instagram.