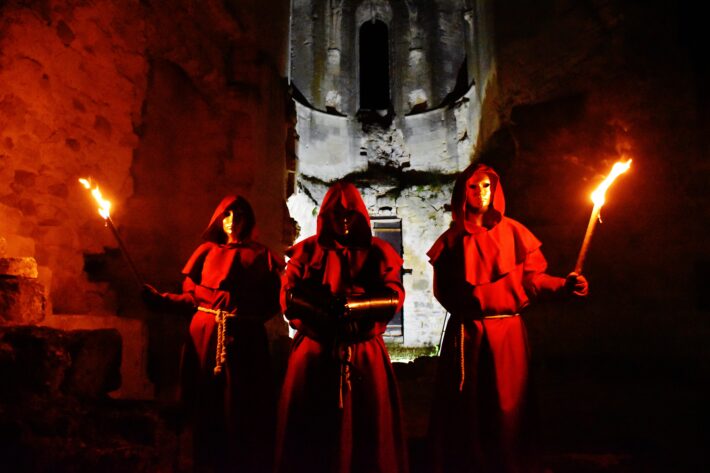 French heavy/doom band Ecclesia published its splendid debut album, “De Ecclesiæ Universalis” , at the end of 2020. Here’s a Q&A I did with the band back then.

Good morning, this is Rick! Who am I talking to? What’s your role in the band?

Let’s start with some history: you’ve been around for four years, and you released the EP “Witchfinding Metal Of Doom” in 2017. What has happened between that EP and this year’s release?

Frater Arnhwald : work and prayer.
The Witchfinder General: a lot of work and a few line-up changes. The years in-between were spent finding a full line-up and finishing the writing process of “De Ecclesiæ Universalis”. We also went on stage for the first time back in 2018. In the end of that year, our new guitarist Julius Accusator replaced former member Conrad the Inquisitor. 2019 was the year we recorded the album and arranged the songs, I must say it took some time but we’re fully satisfied with it.

“De Ecclesiae Univesalis” seems to have enjoyed lots of good reviews by webzines and the likes; were you surprised by these positive reactions?

Frater Arnhwald : not so much. It’s a hell of an album !
The Witchfinder General: yes and no, I mean, on one hand we were really confident in the quality of the album but on the other hand, when you release some stuff, you never really know what to expect from the public. But I have to say that the positive feedback is way beyond my expectations.

Speaking of your EP, the three songs that were present on that release are to be found on this new album as well, in a shiny re-recorded new version; what prompted you to include these songs instead of remastering the whole EP instead?

Frater Arnhwald : we re-worked the songs entirely, added arrangements that were not there, recorded a true drummer, inserted the organ and did vocal overdubs. The first EP was a kind of preproduction demo, nothing to be compared to the LP.

“De Ecclesiæ Univesalis” features an interesting closing track: a cover of a Venom classic, with the title changed from “Don’t Burn The Witch” to the less heretic “Burn The Witch”; why did you pick this particular song?

Frater Arnhwald : because it was a good song but the lyrics were full of lies.
The Witchfinder General: if my memory serves me right, the idea came from former guitarist Conrad the Inquisitor, I couldn’t say for what reason and suggested that we might cover this song. I found it interesting given the fact it’s a fast song and it has no doom aspect in it, contrary to the rest of the album. Also, Venom really deserved to burn in Hell. You don’t mess with the Inquisition!

Do you think you will pursue this theme in your next albums, or will you move on to a different time in history?

Frater Arnhwald : the next album will tell a whole story, a very interesting episode of the glorious Inquisition.
The Witchfinder General: indeed, we have plenty of ideas. Of course, we will keep the liturgical atmosphere of Ecclesia, but doing the same thing twice wouldn’t have any interest, be it for ourselves as musicians or for the public.

You are not the first band to use this kind of images (Ghost and Batushka are the first examples that come to mind); where did this idea come from? What do you think differentiates you from other bands with a “monastic” fashion?

The Witchfinder General: Ecclesia represents the Church, or at least the Holy Inquisition, thus we couldn’t imagine ourselves just playing or posing for pictures in jeans and t-shirts. That would be a total nonsense. The liturgical image completes the liturgical aspect of our music. It is also a way to blot out our personal identities, as individuals. When you look at us, you have to see Ecclesia: that’s why we wear neutral face masks and red robes. It is also a good way to impress the enemy.
Frater Arnhwald : the other bands think this as a kind of new level of blasphemy. Our intent is to blaspheme the blaspheme itself.

Though nobody has been touring since March, do you have some touring plans already? Will your shows include a choreography?

The Witchfinder General: we don’t have any touring plan at the moment but we’ll do our best to perform on stage as much as we can, as soon it is possible. We also have plenty of ideas and you can expect some dark ceremonies. Trust us.

Thanks to the guys from Ecclesia for this interview! “De Ecclesiæ Universalis”, an album that I enthusiastically recommend, was released on November 13th 2020 and it can be found on the band’s Bandcamp page; you can also follow the band on Facebook.