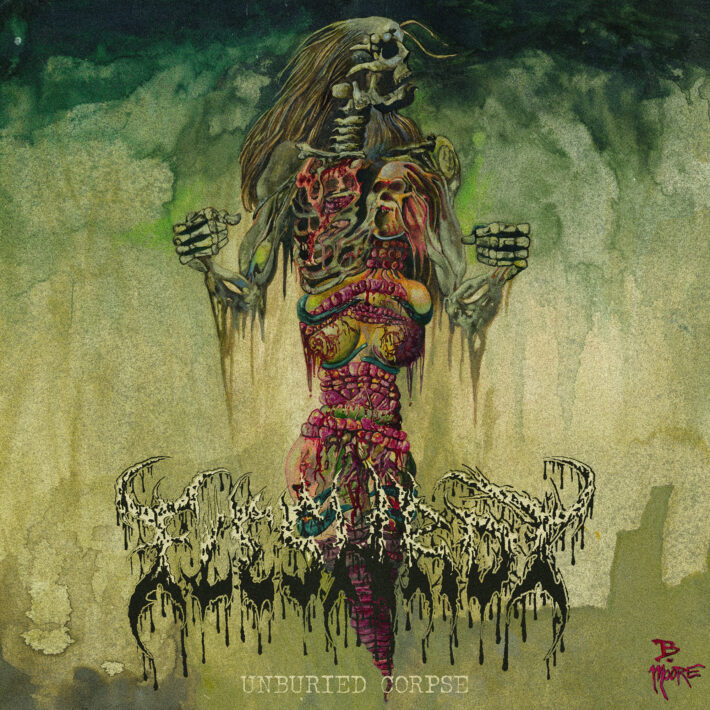 Fleshrot have come to give you absolutely nothing. No technical flare, no complex songwriting. You will get your Entombed-style buzzy death metal and you will like it. The subject matter is exactly what you’d expect, as is the instrumentation and song structure. On their debut full-length Unburied Corpse, Fleshrot offer unadulterated death metal and dare you to complain.

And complain I will. But first the good stuff. From the opening riff of Unburied Corpse, you know exactly what Fleshrot set out to make: Very simple, repetitive death metal with a focus on guitar tone and fun. From there until the mid-track gurgles, laughter, bells, and doomy guitars, you get absolutely nothing but the most straightforward death metal possible. None of the other tracks change the style in the slightest.

Unburied Corpse serves as the musical equivalent to C-level horror flicks. No, this won’t scare you, and it doesn’t exactly sound like a masterpiece. But it is so, so much fun. Do I care in the moment that some guitar riffs actually kind of sound boring, saved only by the crunchy guitar tone and pounding drums? Not at all. I’m too busy rocking out to this distilled version of death metal’s rotten soul.

The performances on Unburied Corpse are entirely fine. Fleshrot stay within their zone, and do so marvelously. Guitar tones, rumbling bass, drum bonks, and vocal roars all live in that death metal sweet spot where the band sounds effortless. While nothing stands out or impresses, the group plays together in a manner that makes good use of their tone.

So Fleshrot makes big dumb caveman death metal. They still had to put some effort into the songwriting, right? Either they spent hours crafting Unburied Corpse to sound perfectly mindless or they were writing it in the studio as they recorded their one and final take. I suspect that the former holds true, as there are some smooth section transitions that had to have taken plenty of effort to turn into an effortless sound. “Draining The Liquified Remains” has plenty of examples of this effect. Fleshrot have perfected the art of creating tension by grinding their songs to a halt and letting the drums and strings bash the listener into appreciation. They don’t take it quite far enough to be slam, instead they summersault exactly into a spot in between death/doom and slam that results in pure death metal with no extra adjectives.

Although Fleshrot nailed their intent and created the platonic ideal of a death metal record, there are some issues here. First, the band’s direct approach to the genre means that there’s no reason to not just listen to Entombed instead unless you are extremely bored them. There’s nothing turning me away from Unburied Corpse, but there’s also nothing that particularly pulls me towards this record. Additionally, there’s not a ton of replay value. Once you’ve listened to it, you know all there is to know. While I did enjoy repeat listens, I don’t have much desire to return and I don’t feel that listening to Fleshrot gives me much that a thousand other death metal records couldn’t also give me.

Fleshrot could have made something more intriguing, but there is value in sometimes just throwing a fastball down the middle with your approach to your music. I enjoyed the hell out of Unburied Corpse, and found it to be exactly what the band seemed to want. However, by design Unburied Corpse does not stand out from the crowd beyond some fun tempo changes and doesn’t offer anything other than forty-year-old guitar tones. I recommend Fleshrot to anyone looking for fun death metal to listen to at the gym, and to anyone who has ever complained that adding a saxophone to a metal album is pretentious. Unburied Corpse is, above all else, good enough.