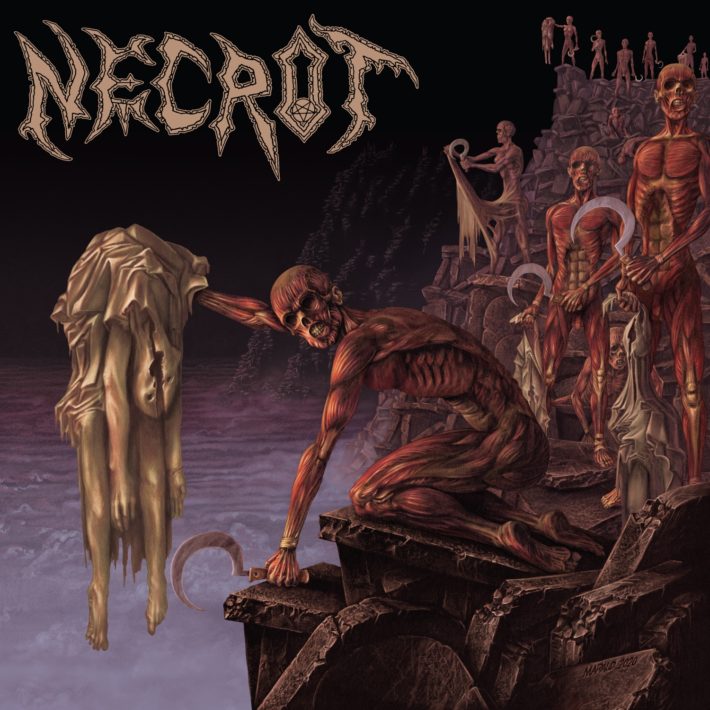 Expectations can be killer. Something that is good will fail when greatness is expected. Following up on an acclaimed or promising debut, many bands fall into a dreaded “sophomore slump,” partially because, in the words of Elvis Costello, “You have twenty years to write your first album, and you have six months to write your second one.” Necrot didn’t quite take twenty years on their first release, and it’s been a bit longer than six months since their wildly popular debut full-length release, but still. Expectations are high following this band’s initial success. High enough to kill this release if it stumbles and falls.

Necrot is a young death metal band with an old soul from Oakland, California. They’ve released a few demos, but Mortal is their second full release, following up 2017’s Blood Offerings. Two thirds of the band also play together in Vastum, and this outfit has been together with no lineup changes since 2011, so there has been plenty of time for their sound to ferment. The sound here is straight-forward, pummelling death metal. Everything is louder than everything else.

All of the songs on Mortal have a lot in common, to the point where this feels less like a collection of individual songs and more like variations on a theme. This hyper-focus gives the album extreme cohesion and identity: This isn’t just a death metal release, this is Necrot. Despite there not really being anything unique to this band’s style compared to the past thirty years of the genre’s brilliance, Mortal will be drilled into your brain as something unique.

Simultaneously being unique and same-y would usually be album traits that result in me griping about an album, but not so with Mortal. Necrot’s writing is damn good. I find myself happy that each song sounds similar to the previous effort, because I enjoyed the previous effort and wanted more. If this was a single, almost forty minute long track with this level of complexity, it would suck. But because Necrot have done a deep dive into their sound, they get away with things using their variations that other bands couldn’t get away with, such as repetition and the direct, in-your-face emoting that Mortal gives.

The press release for Mortal calls this work “intricate” and “precise.” Those words work fine, although I’d have used “bludgeoning” and “elegant”. This is a loud, violent release, but Necrot never forgets to leave a memorable impression. The riffs are great. Necrot has mastered the art of creating violent sound and memorable hooks at the same time. It seems impossible to make a bad record with that as a backbone.

Nothing is perfect, even great death metal. Mortal sounds brittle. Everything is too on the beat, making everything sound slightly artificial, while also making it sound like the music is one second away from falling off the rails and shattering. Although this never actually happens, the feeling casts a cloud over everything. This is a similar problem I have with other great death metal releases of years past such as Annihilation of the Wicked and Where Owls Know My Name (at times), so I doubt that this will be the thing that sinks this release for anyone. Still, it made listening to the album tiring at times. Additionally, although the drumming by band percussionist Chad “John” Gailey is usually excellent, at times it felt more like a table setting for the rest of the instruments rather than art in its own right.
Confession time: I thought Blood Offerings was slightly mediocre. Mortal, however, is great. This release doesn’t just meet expectations, it pole vaults past them. Luca Indrio claimed that they feel that Mortal will be considered a classic of the genre in twenty years. Only time will tell, but Mortal is as good a gamble as any to reach those rare heights.