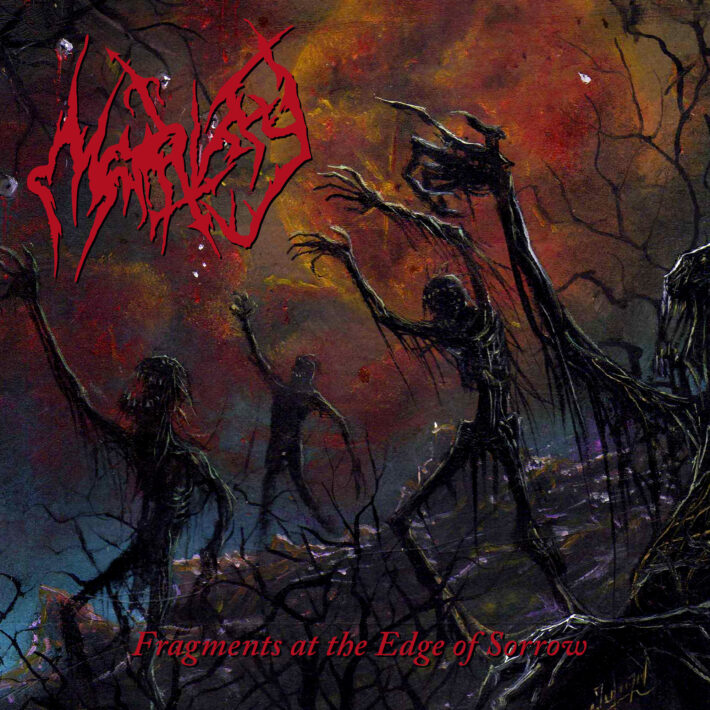 To clear things up at the beginning, this is the Chilean band Mortify. Metal Archives lists twelve different bands with this exact name. When you add in similarly named bands like Mortiferum and the Mortifer’s and the Mortifera’s, it gets out of hand and becomes a google nightmare. So: This Mortify is from Chile, they released their debut full-length called Mortuary Remains in 2017 after a demo and an EPand are following it up this year with Fragments At The Edge Of Sorrow. Their style ends up being almost-but-not-quite death/doom, although plenty of time is dedicated to sounds not typical in that genre as well.

Vocalist Cristian Fuentes sounds like he’s having a great time all throughout Fragments At The Edge Of Sorrow, and I am along for the ride. His wilder moments remind me of a death metal version of the grunts from Unto Others. Between his vocals and the backing vocals, Mortify has plenty of variety and very few dull moments in the band’s throat section. The rest of Mortify sound plenty engaged as well. When the band’s songwriting allows them to, each member of the band is capable of showing off in an engaging and memorable way.

Mortify’s production doesn’t quite work. The drums sound weird at times. More importantly, the whole record sounds like it tried to pack a punch, but did so while underwater and wearing mittens. Fragments At The Edge Of Sorrow still sounds weighty, but this aspect of the band could have been exaggerated more via a different production job. Once the album is going I can ignore this issue well enough.

The songwriting on Fragments At The Edge Of Sorrow fascinates me. Sometimes Mortify gets unavoidably boring. However, elsewhere the band displays a talent that could propel them to acclaim within the death metal community if they learn to harness it. The first track, “Beneath The Emptiness,” shows this right away. The guitar solo near the end of the song showcases talent, restraint, and throughout the track there are well-written riffs.

Elsewhere, Mortify lean on their long notes and repeated notes too much. They try to rest on their grimy, distorted atmosphere to stretch out their moments between the more wild sounds. It’s not enough. Long stretches of Fragments At The Edge Of Sorrow just do nothing.The length of the record only exacerbates this issue. It’s about fifty minutes, so they’re not shattering any records, but the long tracks over a long record with long sections of not enough going on adds up.

When the band dives in and writes engaging phrases rather than just letting a distorted guitar plunk rest over a blast beat or possibly nothing, they do a better job maintaining interest. Unfortunately, every song is plagued with the long plunks. Mortify’s attempts at spooky quiet death doom work better than similar moments from their peers because they put effort into creating the atmosphere rather than relying on the guitar distortion (See the instrumental interlude tracks “Fragments” and “Edge.” “Sorrow” doesn’t quite work as well).

So you end up with an inconsistent record. Individual sections of Fragments At The Edge Of Sorrow sound fantastic, with either detailed and restrained melodic lines that captivate or a genuinely enticing atmosphere. But elsewhere you just have nothing to maintain interest beyond the barest of death metal. Mortify’s been around since 2013, but this sounds like a band that’s still trying to find their footing. Still, there was enough here that I enjoyed my time with Mortify, and I’ll keep an eye on them in the future. I recommend this album to anyone looking for a slimy, atmospheric record of death metal. Mortify stand at the base of a towering mountain, but they haven’t ascended yet.