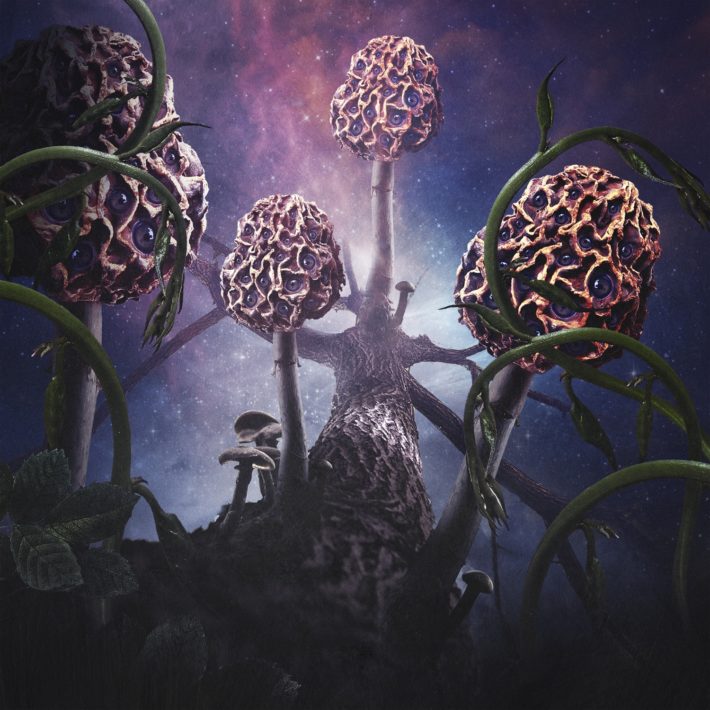 Of the purpose of ambient music, Brian Eno once claimed, “Ambient music must be able to accommodate many levels of listening attention without enforcing one in particular; it must be as ignorable as it is interesting.” Blut Aus Nord aren’t ambient, they are atmospheric. However, the quote still holds true. With Hallucinogen, the newest release by the avante-garde black metallers, Blut Aus Nord seem to have set out to create an album that is interesting to dissect for their hardcore fans while simultaneously being fun to listen to for an unknowing, half-listening audience.

Right out of the gate, the listener will immediately notice the reverb drenching this album. Everything echoes off of everything. In the promo material, the band states that they are “moving skyward into freshly melodic territories of progressive clarity” and “more open than ever, full of life, and reveling in the element of surprise.” Reverb seems to be one of the ways that this clarity and surprise manifest in the music. It mostly works. Combined with the sometimes indecipherable choirs drifting in and out of the music, the saturation of reverb effects creates a sense of being lost and adrift in time and space. There is never a sense of panic, however, instead it feels as if the listener is simply along for an unknown but pleasant ride that will hopefully end somewhere restful and positive.

That pleasant ride doesn’t really change pace much. Even though the songs are quite dynamic throughout, the pulse doesn’t change a whole lot. “Sybelius” is a hair slower than the first two tracks, and “Cosma Procyiris” is a hair faster, but not by a drastic amount. Additionally, the entire album has mostly the same tone and feel, probably partially due to the large amounts of reverb. Somehow these traits even continue through the quiet, whispering portions of the album. It is a testament to the songwriting ability of Blut Aus Nord that the album still works at all. Usually an album with this amount of monotony comes across my ears, this paragraph would go on to complain about how the writers couldn’t think of anything better, or how everything sounds the same to the album’s detriment. On Hallucinogen, however, it sounds like there wasn’t much that Blut Aus Nord could have thought of that would have been better, and everything sounds the same, much to the benefit of the listener. On the few occasions that there is a substantial shift, it is a clear signal to the listener that it’s time to pay attention again if they had been slipping away.

As previously mentioned, one interpretation of the goal of ambient or atmospheric music is to be interesting at every level of attention. In other words, the artist should be looking to create a detailed and interesting wall painting: the knowledgeable and posh listener/viewer can observe, comment, and pick apart to their heart’s content and find nothing but joy and interest resulting, while the less enthusiastic and less astute listener/viewer can just have the piece of art in the background and not worry about it too much. The art is a positive contribution either way. Here, Blut Aus Nord have succeeded as well as anyone.

This is not the same band that made albums like The Work Which Transforms God; those albums could be distracting and painful to listen to if you just wanted fun. Wayne and Garth, of Wayne’s World fame, posited while philosophically debating the unfortunate contradictions between artistic merit and critical and commercial fame that “Led Zeppelin didn’t write tunes that everybody liked. They left that to the Bee Gees.” Within the small subsection of the world that is people who would even come remotely close to giving an atmospheric album from an avante-garde black metal band a shot, Blut Aus Nord may have succeeded in making the elusive Led Zeppelin / Bee Gees crossover album.

Nothing is perfect. Hallucinogen doesn’t stick in the listener’s mind as easily as some albums do, and I have yet to actually remember any of the tracks names. The guitar solos, while interesting, are not the peak of human creativity. Although the band stretched their songwriting ability, this album is not really technically impressive. But it doesn’t need to be. Hallucinogen stands out as a great release even in a year saturated with black metal releases. Given Blut Aus Nord’s record, I came into Hallucinogen with high expectations, and was still pleasantly surprised.