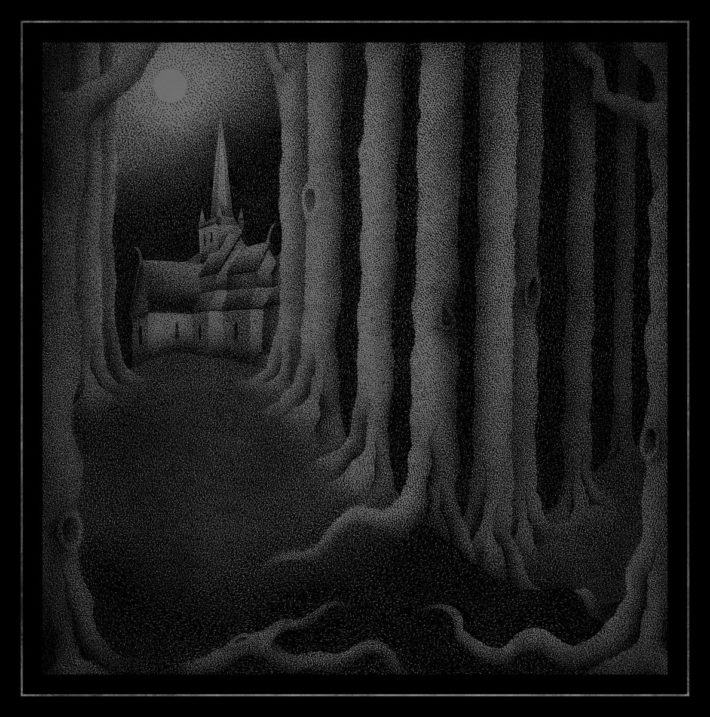 Every year, when winter is coming, I get the urge to look for new black metal bands. There’s something about the trees shedding their leaves and the weather getting colder, that makes me feel like listening to black metal that matches the bleakness and harshness of this time of the year. This year was no exception, and to my great joy, I came across an atmospheric black metal project called Ì Myrkri, which is Danish for ‘In Darkness.’ Ì Myrkri was formed by Simon Garðarsson, who writes and records all instruments, and vocalist Lane Chaplin, who is in charge of the vocals.

November 30th of this year, they release their debut album, Black Fortress of Solitude, and when I put it on, I was immediately reminded of the raw 90’s Norwegian black metal sound that inspired Simon while writing the music. The album’s opening song, The Force of Atmosphere, starts with the howling wind, creating a dreary, grim ambience for the record to begin with. Shortly after, the distorted guitars start to play over a surprisingly groovy drum beat. This grooviness is present throughout the whole record, making it a bit more accessible for those who might be new to the genre. The riffs are solid, fast, and dissonant, everything you’d expect of a black metal album. The Solitude that the album is about, comes across really well in the vocals. The grunts are harsh, seemingly expressing agony and pain, which really fits the image of the record. There’s also calmer interludes (as far as you can describe black metal as ‘calm’) on songs like Upon an Altar of Blood. These make the music a bit more diverse, giving you a break from the fast and heavy riffs, before coming back again with full force.

I contacted Simon on Facebook to ask him whether he’d like to do a short interview about Ì Myrkri and about himself as an artist, and he was so kind as to take the time to answer a few questions:

First of all, your music seems to be influenced by the classic 90’s black metal sound, who or what would you say inspires you most in writing music?

Yes, I was especially inspired by the Norwegian Black Metal scene for this album. My inspiration for writing music comes from a life with playing different instruments. My main instrument back in the day was the bass guitar and I would learn myself to play it and eventually come up with my own melodies and riffs, be it tapping, slap and so on. So I have always been into playing my own stuff mostly. My inspiration nowadays is the urge to create the music I love the most, Black Metal, and to get that feeling I get from listening to other BM bands I love.

Now, about the creative process behind the album, how closely do you and Lane work together when writing the music and lyrics?

For this album Lane got total creative freedom. I of course had a vocal sound and a lyrical theme in mind. I wrote and recorded all the instruments on the tracks and then Lane would write lyrics and record his vocals over that. I sent him some inspiration for the vocal style/sound I had in mind, and then he recorded them without having to change his own vocal style too much. Now we work more closely together regarding my future releases as he is also a producer, so he will also mix/master in the future. And I have gotten more aware of how I want the vocals to be, so I will have some more influence there as well. But for the debut album I was glad we did it this way with him doing his thing.

Do you have (or have you had) other projects apart from Ì Myrkri? And if so, for how long have you been writing music?

Not really, I was in a death metal band back in high school where I played bass. Even though that didn’t last very long, it was there I really progressed as a musician, learning some crazy technical riffs and so on. It was also there I started to write my own song parts. But as for writing music, like full songs with all instruments, I have only been doing that for six months or so. And I figured that BM was the perfect match for me writing music. It just came very natural for me in a way.

And lastly, if you would write music in another genre than (black) metal, which genre would it be?

Hmm I think I would maybe be writing some really drony atmospheric stuff. But I also really love Dungeon Synth, and I have actually written some Dungeon Synth parts for my next album. Maybe I will start a DS project in the future as well.

In conclusion, Black Fortress of Solitude is everything an atmospheric black metal record should be: harsh, bleak and punishing, while being able to create a whole scenery in which the listener can drift off. The album is influenced by the classic black metal sound from the 90’s, but it’s still something unique. I highly recommend giving it a listen if you’re looking for a solid atmo-black record to mark the beginning of winter.