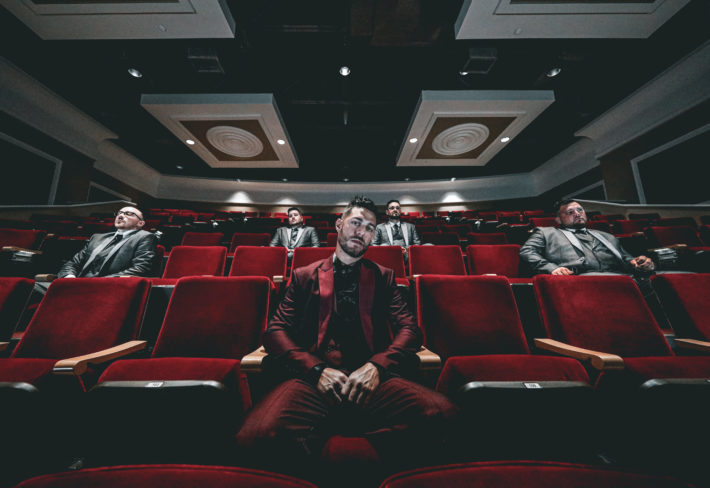 Full of determination and hard-working attitude, Huxley is an up-and-coming band from New Jersey, about to release its self-titled debut EP. Here’s my interview with the guys.

Hello from MetalUtopia, this is Rick! Who am I talking to?

Rick… don’t like it. We will now refer to you as mullet man. Not sure if you have a mullet but we believe you do. We are Huxley. The new kings of rock and roll. Thanks, Huxley; I don’t have a mullet, but I do have a mohawk. I guess you could call it an odd kind of mullet?

Huxley has risen from the ashes of Endless Sacrifice.
After a decade of playing together, you split up, changed drummer and bassist, and reformed under a new name, switching from metalcore to hard rock, but without abandoning that hint of everlasting presence of alternative metal.
What were the reasons behind this breakup, and was it hard to “say goodbye”? Why this “change” of genre?

In a way you could say we never really said good bye to the old members… we killed them. Honestly, we felt like rock was what was missing in our souls, and what we were meant to be. We just had to get through our teens and early 20’s to realize.

When I first heard your name, I immediately imagined it came from Aldous Huxley, most known for being the author of the 1932 dystopian novel Brave New World. If this is true, why did you decide to take this name?

In a way yes. If you ask Robbie, our resident hipster (Huxley’s drummer), yes. But honestly it’s the name of the street we practice on….

What are your opinions on the metal scene right now? How are things going for independent bands?

Metal is a hard scene, the musicianship seems to get lost on the modern audience. That’s why the change to rock felt necessary. We wanted to be relatable to more. Being independent isn’t the easiest way of doing things. It’s expensive and you need to believe in your music, but we want to and will grind to the top.

This year was full of great new releases in music, some of them long-awaited. What was your favourite?

We fuxed with the wiggles, but besides that, our boys in Awake at Last released some fire.

Why did you choose to debut with an EP, instead of a full-length?

Well mullet man it’s two things. We want to build the interest of the audience make them want more, and hopefully recoup some money to do it again.

Shinedown, Starset, Breaking Benjamin. Those 3 give a clear image of who Huxley is, catchy with grit. We wouldn’t pin point any song in particular. Our sound comes from the ability to take from everything and not say let’s write that song.

Who wrote the lyrics, and who was the main composer? What was the writing and recording process like?

Doug (the band’s vocalist) wrote the lyrics, and ley’s say Mike (guitarist) would be the main composer, but with both lyrics and music is more collaborative than that. We like each other ;).

What is your favourite song off “Huxley”, and why?

“We Are” is what we connect with most. It was written for those who struggle with fitting in, and that was important for us to make sure everyone knew with this band that it doesn’t matter who you are, who you love, what makes you “you”, that there is room for you in the Huxley family. We love all and we want all to be Huxley. We are… Huxley.

In less than a month the EP will be published. What are you looking forwards to, as a band? Do you have any plans regarding tours and future albums?

We already almost have an album ready to go. Hopefully after our EP release show in Atlantic City (New Jersey), at the Anchor Rock Club, we can build some momentum for some shows and such. Hopefully some one of importance will Fux with the Hux.
Hey, mullet man, great interview. You are the most hux dude yet.

Thanks to Huxley for this extremly fun interview!
The debut EP “Huxley” will be available on December 13th, on Spotify and other major streaming services. Follow the band on Facebook, and on DistroKid.