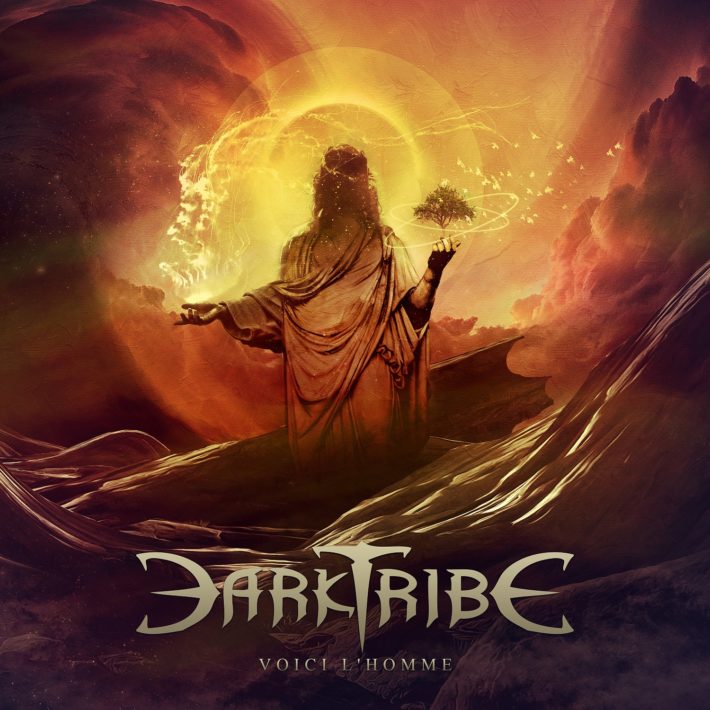 Even the fan of the goriest, most brutal death metal, even the trvest chvrch bvrning satanic black metal fan, even the longest-haired, greasiest taco bell cashier who switches daily between Entombed and Exhumed t-shirts hoping that someone will notice, even the biggest believer that a band logo has failed if there are any symbols that can be recognized as letters on it, even the headbanger  who has to re-state daily with a different band that they really just separate the art from the artist, and it’s actually you that’s the real nazi, occassionally needs a breath of fresh air.  Enter Darktribe. Sure, all those brutal and extreme sub-genres are pushing their own musical boundaries and extremes, but no genre toys with the intersection of earnestness and over-the-top cheese quite like power metal.

On their third album Voici L’Homme (which google tells me means “Here is the Man”),  Darktribe play a somewhat stripped-down form of power metal that seems to have its finest days behind it, but that doesn’t mean you can’t have fun here. Darkthrone sacrifices some of the typical bombast and neoclassical guitar riffs for emotional punches and a focus on the choruses. The vocals have a slight Madder Mortem feel to them, mainly in the lilts near the end of the phrases.

Said vocals are the focus on Voici L’Homme, with every other instrument mainly serving to supplement the emotional power of Anthony Agnello’s crooning. Agnello has an impressive voice and maintains complete control of his tone and inflections throughout the album. Centering the vocals was a great choice by Darktribe. I was constantly waiting for the next chorus to infect my mind and stay there for just long enough to hold me over until the next chorus. This is a band that knows how to write a great tune, and they try to leverage this talent as much as they can. The vocal acrobatics do not get tired at all, and help the album go much quicker than it could have.

This strategy of sacrificing everything for the band’s apparent strength seems to have made this album better than it had a right to be, as the sections where the band ventures on their own do not work out as well. Guitar runs get disjointed at times and are usually unimpressive, drums don’t really ever do anything interesting, and there are some awkward transitions that pull the listener out of the music. However, when Darktribe sticks to their formula, everything seems to work together.

Beneath that formula and vocals there isn’t enough of anything. Nothing else is impressive enough to hold this album together, and as a result individual songs seem much longer than they actually are. Ultimately it makes the effort of making the album feel hollow. The cheese and passion are there in the vocals, but outside of the occasional hook or guitar solo everything else is just sort of playing along. The music feels too simplistic to support its own weight. I didn’t care as soon as the next chorus line hit, but it made the in-between times a bit rougher than they needed to be.

Don’t take that last paragraph the wrong way, simplicity isn’t necessarily bad in music. It’s just that in this case, that simplicity serves to push everything towards the vocal choruses, which leaves a gaping hole in the music when the vocals are resting. This feels less like simplicity for emotional emphasis or artistic reasons, and more because they simply didn’t have anything else to say.

Ultimately, Voici L’Homme was a fun, enjoyable, catchy, and pleasant power metal album that I will forget about in a month. Of course, my memory is terrible, so Darktribe may have a longer lasting impact on you. Despite my complaining here, this was a good album that I’m glad I got the chance to experience.