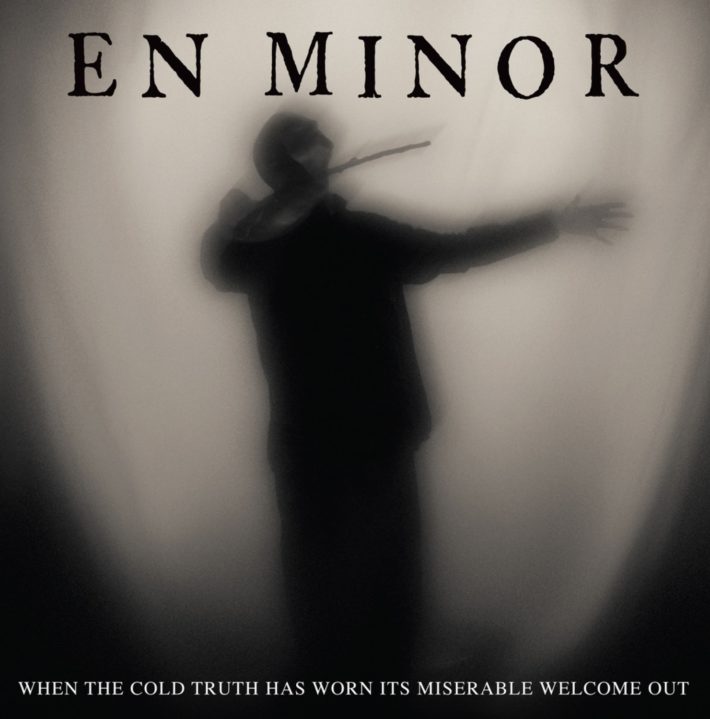 All music has a purpose. Sometimes, such as in the case of schoenberg, that purpose is simply to be music. There is nothing external driving the music beyond its own existence. Most of the time, though, something muddies that rather pristine water. Some bands attempt to dazzle with technicality, some songs are to benefit one group, some artists are in it for money and fame. In the case of En Minor, the purpose is to evoke an extreme emotional response. The raw sorrow radiating from their newest album debut proved that they succeeded almost beyond belief in that. However, an album does not become successful merely by accomplishing its purpose.

I’ve seen En Minor, a new band featuring Pantera’s Philip Anselmo called “depressioncore” and “dark americana,” both of which seem to be attempts to lump When The Cold Truth Has Worn Its Miserable Welcome Out (which from now on I’ll simply refer to as Cold Truth so I don’t blow past my word limit from this title alone) in with metal albums for marketing purposes. These attempts get little help from the music itself. This thing sounds like Johnny Cash drunk and lying prone on a dirty coach at one in the morning. It sounds like an old man, looking back on his life and seeing nothing but sorrow for lost time. “Somewhere, something is broken” indeed. You won’t find any Cowboys from Hell here. Hell sounds old and tired. All that’s left of that fire is a small ember, barely lighting your way.

If you haven’t figured it out yet, En Minor has emotional resonance out the wazoo. Everything drips with passion. This release contains a singular focus, and every single note points towards this one goal. Luckily, the effect works. Listening to En Minor feels like a gut punch, and the experience shouldn’t be done casually. If you are driving to the beach for a day of fun, maybe don’t pop this record in. However, if you go into the experience eyes open, this album will shade the rest of your day with sorrow. Sometimes the sorrow screams with anger as much as it can, sometimes it features a whimsical and nostalgic reflection of the past. No matter what, there is always sorrow.

Two aspects of Cold Truth both help and hurt this album. First, Anselmo’s vocals. At his best, he sounds like an old man, a breath away from dying, wheezing out the last possible words of wisdom. At his worst he sounds like a version of Bob Dylan that had his vocal chords replaced with sandpaper. I anticipate a highly divided response to these vocals, and which side of the divide you fall on will determine if you can stand to listen to Cold Truth at all or not. Second, En Minor splashes minimalism throughout the album. This ideally serves the purpose of creating a stark and bleak feeling of decrepit loneliness, which this approach sometimes achieves. The rest of the time it just makes everything sound boring. En Minor somehow manages to fall prey to aimless wandering and wasted space in its cold and emotional minimalism.

The biggest downside to Cold Truth is the excessive length of its tracks. You might look at the track listing, see four minute songs, and respond with skepticism, but that statement remains true. Four minutes is a very large container for two minutes of music that have been dropped in and forced to stretch to their breaking point. Nearly every track ends of going on far after I feel it made its point, and this excessive length blunts the emotional edge of this release as a result. That emotional edge, if you remember, is the singular focus and entire point of this release. This also hurts replayability, as it amplifies the feeling that the listener has gained everything that there is to gain from Cold Truth and that nothing further will be gained from listening to it again.

Do I recommend En Minor? Not a clue. On the one hand, the emotional effect of Cold Truth cannot be overstated. But the flaws add up, and I have no desire to keep listening to this album. Cold Truth feels like an album that will have a cult following, but outside of its adoring fans there may not be a lot of traction. The raw emotional response that En Minor can evoke made me happy that I listened to it, but it is an experience that is best felt in the past.