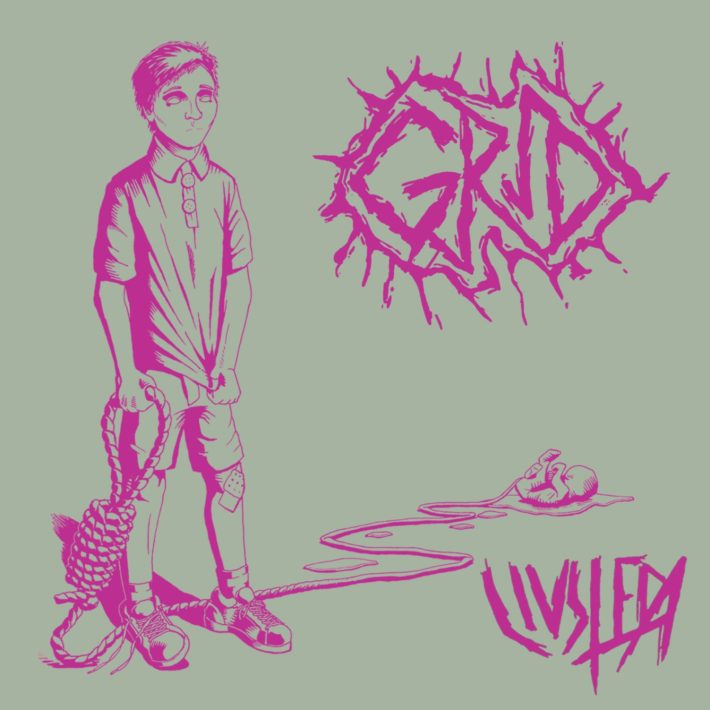 Some people judge an album by its peaks, some by its valleys. If an album contains emotionally poignant, dazzling heights, that will sometimes be enough for the listener to ignore any druck that follows and consider the album one of their favorites. Some people value a more consistent record, and will trade those short moments for a more complete listening experience. No one fits neatly into one camp or another, and which I fall into will vary depending on the album, where on that scale it falls, and how I feel on a particular day. Livsleda, the debut album from Swedish grindcore band Grid, lasts for a brief moment (as most grindcore does), but still manages to raise this issue. How much fluff do you tolerate?

Livsleda provides everything you’d expect from a grindcore release: short, jagged tracks with howling vocals, furiously fast riffs, and a general irreverence for the idea of accessibility. This album leans on the calm side for the genre, so genre enthusiasts may not feel as much chaos as they’d like here. Having said that, Livsleda scoffs at the idea of attracting a wider audience. If you want to listen to Grid, you’ll do it on their terms.

I found those terms pretty compelling, for the most part. The riffs are unmemorable, but they provide a level of energy that this album needs. The frantic, almost-unbuttoned nature of Livsleda serves as the focal point, and does so quite well for the first half of the album, due partially to the excellent guitar playing here. No good riffs? Who cares, Grid doesn’t need them. You’ll feel pulverized anyway.

The production on Livsleda has a dark quality. Everything feels full and grimy. This does not sacrifice the sound quality. Each instrument sounds clear enough, as though the grime covering everything is translucent. Bad production can torpedo a grindcore release, as everything happens so quickly that too much mud will make the listener miss most of the album, so the production choices here are a relief.

The songwriting on the first half of Livsleda sounds excellent. Throughout the album, the on-the-dime tempo changes work great. Grid obviously trust themselves to play their instruments well and have written some impressive passages as a result. All of these passages are fairly ephemeral, as this is still grindcore, but often find themselves followed up by another similarly engaging moment of music. For the first half of Livsleda, the songwriting impressed me over and over again, and this album seemed destined to become one of the better releases of the month. Then the title track hit.

Livsleda‘s title track takes all of that momentum, impressive songwriting, and energy and suffocates it with a pillow in the dead of night. On this track, Grid attempts to create something more atmospheric. It does not go well. The track drags on forever by grindcore standards and does not manage to hold my interest once. After two acceptable but forgettable songs, Grid then repeats this tactic with the final track, ending the album on a sour note. Two duds out of nine, not bad. However, the fact that these two duds are the two longest songs on the album by a lot sours that impression. The album as a whole lasts for a little over eighteen minutes, and those two songs take up over seven minutes of that time. That’s a huge chunk of wasted time.

Grid’s attempt to vary their sound was admirable, but ultimately it didn’t click with me. Although their heights could hang out with Willie Nelson, those valleys span too vast a space for my taste. If you’re a grindcore fan, Livsleda contains enough meat on its bones to be worth a listen. Just don’t expect it to be a regular listen for you a year from now.