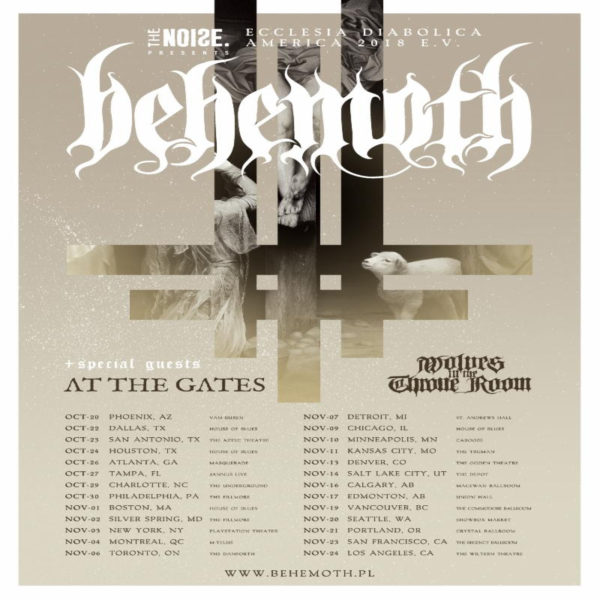 Behemoth, the now-iconic blackened death metal band from Poland, is currently on a huge tour in support of their recently released album, I Loved You at Your Darkest, supported by fellow European legends At The Gates and the powerful American group Wolves In The Throne Room. To say that Behemoth’s music is blasphemous would be a colossal understatement. They revel in Satanic and pagan imagery and spiritually antagonistic themes, proudly embracing some of the most extreme and shocking qualities of metal. They’re also known as one of the best and most important bands in their genre, and they have a towering influence and a passionate, rabid following. I wanted to see one of the world’s most blasphemous bands in one of America’s most religious places: Salt Lake City. 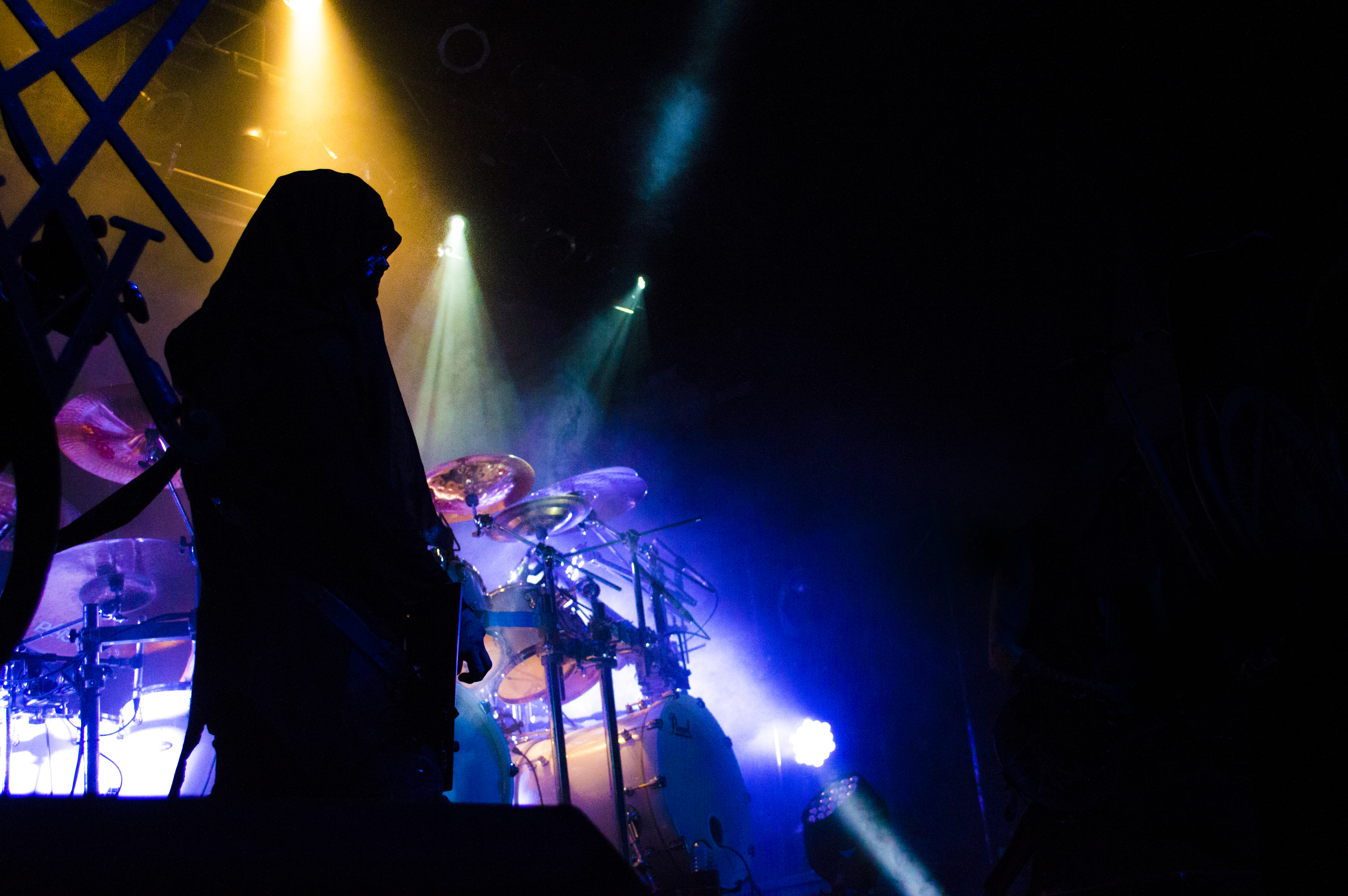 Fans arrived in droves to see the band at one of Salt Lake’s largest non-stadium music venues, The Depot, at the downtown Gateway. Floor and balcony were filled. Several attendees were dressed up in pagan robes and many wore corpse-like face paint in affectionate imitation of the band members themselves. I asked several fans what it was like being a metal fan in such a traditional community. Most responded with observations that it made no difference; metal, especially that of the caliber of Behemoth, has the power to coexist just about anywhere. “Everyone expects us to be a certain way, so when the bands come through, they’re really excited with how much energy we have,” one fan said. “It’s going against the grain,” said another. “I like the antagonistic feeling of it.” It’s a testament to the universality of heavy metal as a musical style and cultural subgroup.

After impressive, straightforward sets by Wolves In The Throne Room and At The Gates, the concert crew began clearing the stage for Behemoth. Normally at a metal show, the venue lights go on between sets and the house will play bumper music; here, the lights stayed low, and the sound system immediately began to play back the introductory track from I Loved You at Your Darkest, “Solve.” The eerie sound of children chanting defiantly spilled over the hall. A black, translucent curtain shrouded the stage. Bodies drifted back and forth behind it. While the stage and sound setup was prepared for Behemoth, the chanting repeated continuously. Fans expressed excitement and tried to explain to the security staff how monumental this next band was, how big a deal it was that they were about to perform. They grinned with enthusiasm. The remaining lights were killed and the venue went black. 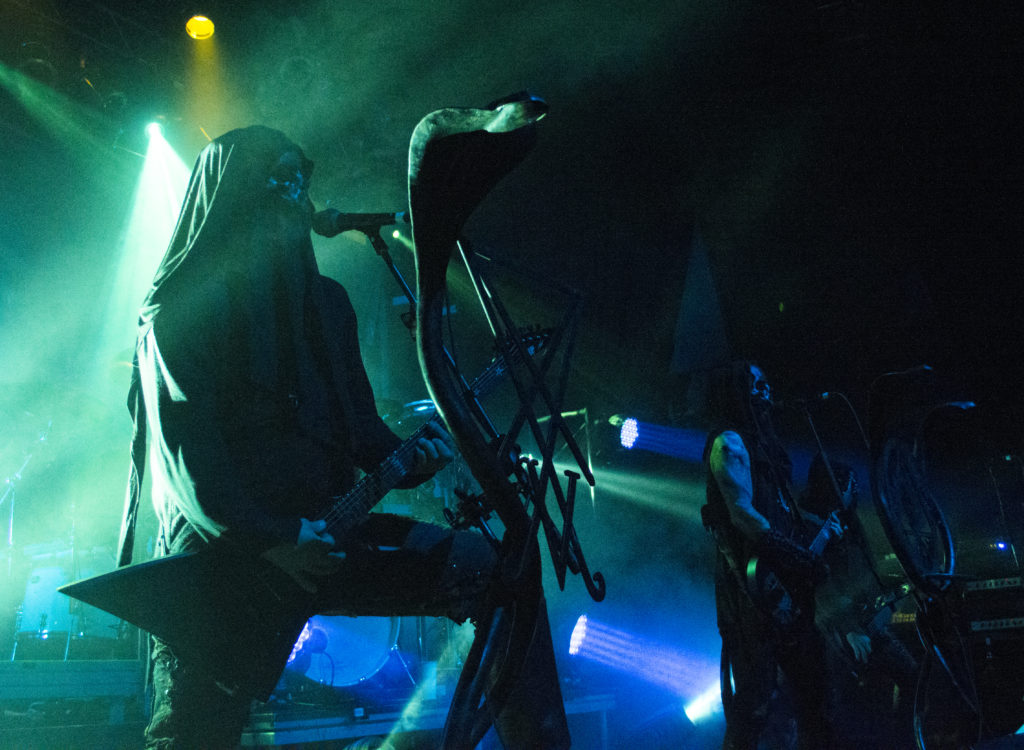 The curtain tumbled and the stage was bathed in smoke and light as the band erupted into “Wolves ov Siberia.” The audience focused and cheered immediately. Behemoth were now visible on stage, wearing hoods over their heads, their faces obscured by black skeletal death masks. Their furious energy seemed to spill over the stage and fill every crevice of the venue.

They continued with two more high-energy tracks, “Daimonos,” and the modern classic from their previous album, The Satanist, “Ora Pro Nobis Lucifer.” They played with the grace of veterans but the energy of a much younger band. Nergal roared and threw his fists in the air, and never stayed put, moving almost constantly from one spot on the stage to another, stepping in towards the audience then back alongside his bandmates. He was a wrecking ball of aggression and musical force. The band matched his showmanship and expertise in their playing: they performed in perfect unison with no signs of sloppiness live. After the first three songs, they had laid waste to the audience, and they were just getting started. 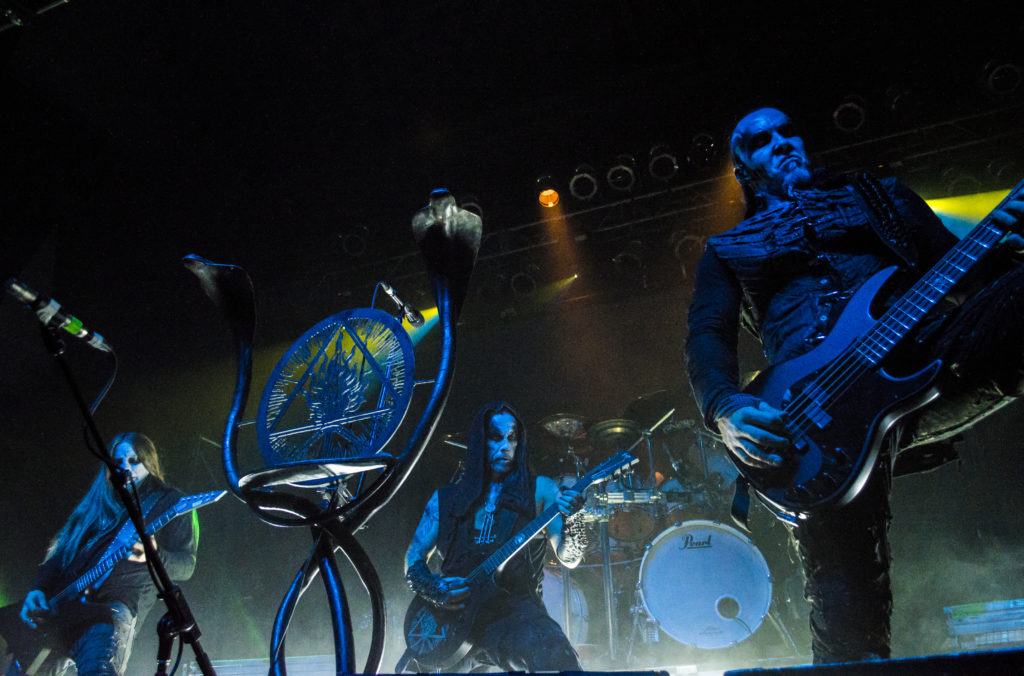 There was then a pause of a few seconds and Nergal went off stage, only to reemerge moments later wearing an enormous crown, evocative of the tremendous crests worn by the popes and old Christian emperors. Underneath it, he remained mostly stationary in center stage for a driving performance of the anthemic “Bartzabel.” The slower, pulsing rhythm of the track was accompanied by changing lights and smoke. A lot of metal bands attempt theatricality in their live performances and fail; it comes across as campy or juvenile and is met with as much laughter as wonder. But Behemoth commands only an awestruck reaction. They have the musicianship and legacy to be able to pull off extremely dramatic performances. In fact, by introducing new presentations and combinations of light, smoke, and costume throughout the performance, Behemoth managed to keep each song visually and thematically fresh and interesting, which prevented the concert from dragging at any point. As a result, what they present is more a multi-sensory and artistic experience than it is a simple live performance. 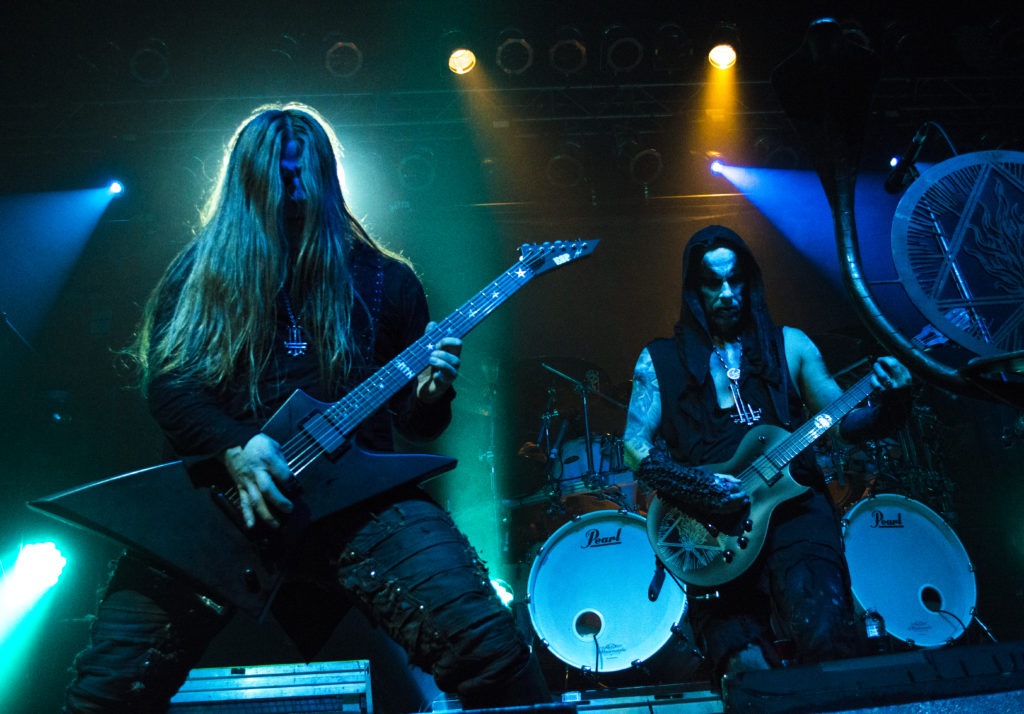 The sound was full and precise. Occasionally during the more violent passages, clarity and color were sacrificed for power and intensity, common in live metal, though frustrating. The stage was well decorated and the band was set up behind ornate, sculpted mic stands adorned with cobras and carved symbols. The stands, while darkly beautiful, were also large, and acted as a barrier between performer and audience, numbing the connection between them. Energy that Nergal had summoned on his trips to the front of the stage, close to the audience, would be lost when he would return to his vocal station, largely hidden from view. 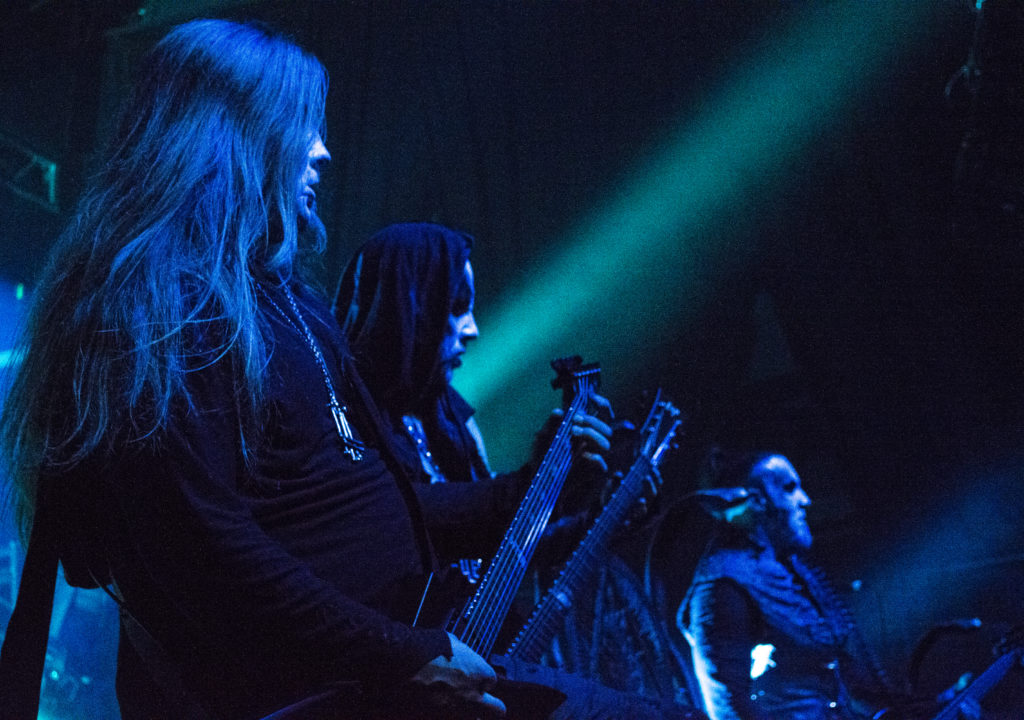 As the night went on, Behemoth danced and wove through songs, rarely uttering a word between, exploring material from previous records along with songs from Darkest, going as far back as 1999’s Satanica with the tracks “Decade of Therion” and “Chant for Eschanton 2000.” The fury was constant all the way until the end, when, after “Lucifer” and “We Are the Next 1000 Years,” the show came to a smoldering end, and the outro track “Coagvla” played back on the sound system as the crowd’s uproarious and extended applause drifted away.

Behemoth live was an experience that was dramatic, over-the-top, and satisfying. Fans of the band will enjoy getting exactly what they hope for: a brilliant live performance of some of the band’s best tracks accompanied by a haunting and compelling show. As one delighted fan said, “the music, the energy, the chaos…that’s what you love about it, the forces behind it.” “Hail Satan,” his friend said, grinning. “Hail Odin.” 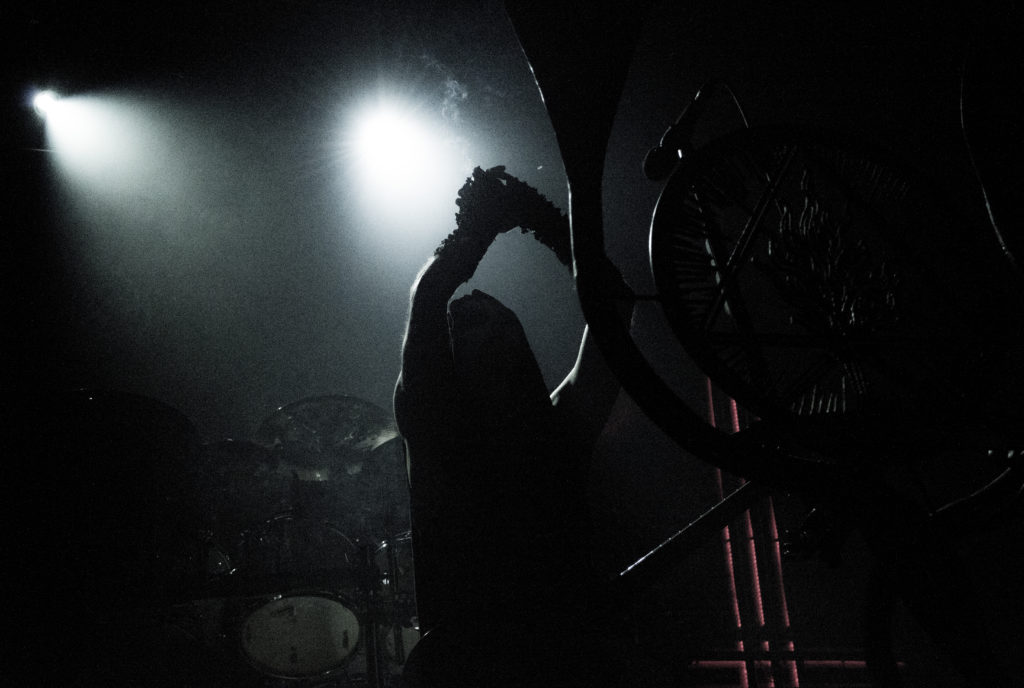