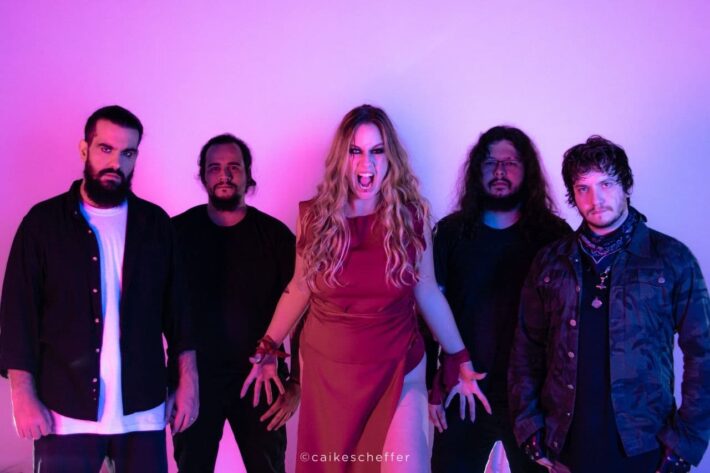 After quite some time in the making, Brazilian hard & heavy band Allen Key published their new album at the end of October. I had a brief chat with the guys to talk their music and their history as a band.

Hi, this is Rick! Introduce yourself a little: who are you and what’s your role in the band?

Hi Rick! Thank you so much for the questions raised. I’m William and I’m the bass player for Allen Key.

The album begins with two ballads: quite the bold choice, as this kind of songs is usually found at the end of a record! What prompted you to start The Last Rhino this way, and then to proceed “upwards”, with progressively heavier songs?

Actually The Last Rhino begins with the Title Track itself which is a heavy song, followed by Straw House, which is a catchy Hard n’ Heavy song. After these songs we move forward with the balads Love You More and Illusionism. We decided to go in this way to show our listeners all of our elements, to show that Allen Key can be both heavy and soft, but also maintain the “heavy” side also on the ballads. (it turns out my pc had rearranged the songs in a different order. Oh well!)

As I’ve understood you are planning to release a videoclip for each song on the album; do you believe videoclips are mandatory for a band nowadays, to obtain success?

That’s correct, we plan to. But we don’t think it’s mandatory, we think that’s the proper way to conect ourselfs with our listeners since with the pandemic we couldn’t schedule any concert and also it’s not a usual thing most of the bands do.

Additionally, how do you plan each videoclip for its own song?

We plan the videoclips based on the songs itself, the theme approached in each song is different; for example, The Last Rhino is about dealing with internal issues, depression, traumas, and so the video itself shows the band fighting against the “evil” inner version of each one.

In an interview for Rolling Stone Brazil, you mentioned that this album has gone through three remakes, and this is before landing into the hands of your current producer. What led to this album being rewritten so many times? And what changed every step of the way?

We think every process requires reimagination, maturity and changes. We always wanted to deliver what we feel, to deliver not just a record, but an experience to our listeners, so they can feel part of this by listening to every song.

Your ascent to fame began with the victory in the Girls Rock contest, amongst almost ten thousand other contestants; how did it feel to win a contest with so many participants? What did you think was your winning feature?

It was a blast! We feel honored to win the contest among so many other great bands. Our winning feature I believe was the passion on the songs itself. Tarja Turunen, which was one of the Judges and a great influence for our singer (Karina Menascé), described our songs like that, and I think she’s right.

7. You choose a rhino as the mascot for Allen Key because of its brutality and at the same time its protective instinct; how would you relate this to the band, and to the themes expressed in the lyrics?

Correct. The Rhino as a symbol fits perfectly with the band, the way we conduct things, the way we protect each other. As per the lyrics, it fits with the brutal parts about dealing with delicate subjects such as women abuse, losses of loved ones and the more protective ones dealing with subjects like depression and passion.

Thanks a lot to Allen Key for their time! “The Last Rhino” can be found on many major music platfroms such as Spotify. Follow the band on Facebook and Instagram and never miss an update!