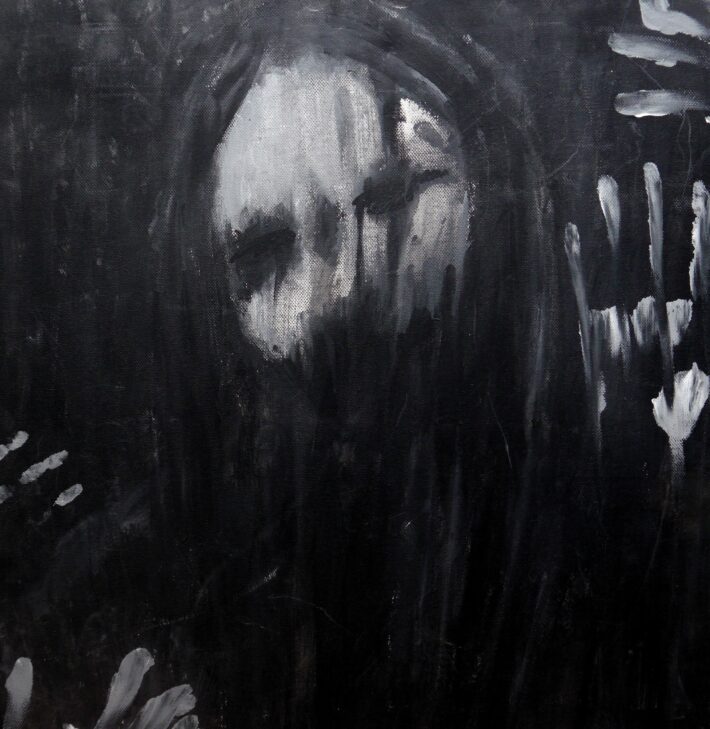 On October 22nd, “Calling The Void”, the new album by Austrian black metal band In Crucem Agere was published. I talked with the band about the album, melodies in black metal and more.

Hello, this is Rick; who am I talking to and what’s your role in the band?

This is the third album by the band, and with Skynatt being the only stable member, it features the third iteration by In Crucem Agere. Do you think changing musicians helps a band diversify its sound and experiment more, or do you think a stable set of musicians brings more unity and coherence, from a musical standpoint?

Syknatt: Þ. Joined the band in 2018 as full member and of course he contributed to create our new sound. After a lot of changes in the past before that, we try to keep a stable line-up for the future.

Þ.: I think it’s possible in both ways. Having a stable line-up is definitely something to strive for, especially when it is a fine-tuned team that can rely on each other. However new members have also the potential to bring in some fresh air. We are in any case happy with the current line-up as it is and intend to continue this way.

The lyrics from Calling The Void tell of loss, despair, and rage, all adorned with overall bleakness. As we speak, our world too is in a state of despair and rage, for the most part at least.
How would you define the relationship between your art and the current reality? When living in a world that’s already suffering, how do you go about creating art that seeks to explore a suffering even more profound?

Syknatt: Already in the past I’ve always processed negative feelings like frustration, anger and despair in the music of ICA. And the current situation definitely contributed in the way that the atmosphere on Calling The Void got even more sinister.

Þ.: Indeed our world is in turmoil, burning, and it only gets worse: climate crisis, global pandemic, religious extremism, consumerist decadence, Orwellian states. This is perfect fuel for the creation of our art, as we too journey further into the abyss – don’t expect our sound to turn lighter any time soon.

While Calling The Void is pure black metal to the core, melodies are very much present on the album, and they are never completely drowned out by the chaos. What do you think is the role of melody, in a genre that is so harsh and apparently the antithesis of melody?

Syknatt: Melodies have always played an important role in the music of ICA, depending on the song they can be more or less present.

Þ.: I disagree that black metal is the antithesis of melody. Even bands that seem to defy melody the most have deliberately incorporated some subtle melodies every now and then, in order to create moments of clarity and brilliance. To me, melodies should always serve a purpose in order to underline the dramaturgy of the composition and add to the overall atmosphere, and not just be there for the sake of it.

Continuing from the previous question, when writing an album with many different layers of music and lyrics such as this one, do you tend to develop everything together or do you work step by step?
Do you write the melodies as opposite of the harsher, more violent sections, or do you think them as something already united and forged together?

Syknatt: Calling The Void evolved step by step by exchanging ideas between the two of us. During the process it showed that the harsher parts worked well together with some more melodic elements.

Þ.: It all came together quite naturally to be honest. In a way the music was planned, but still arose mostly out of spontaneous bursts of inspiration, yet still we feel that it all ended up really well.

And finally, I personally found this album to be beautifully immersive; while listening to it my mind immediately began to wander to dark, more obscure places. Where do you “go”, mentally, when writing and playing your music?

Syknatt: Especially the times when I live through a lot of stress and frustration in everyday live provide ideal moments to work on new songs, in order to process these emotions.

Þ.: I can only attest to that. When my mind is in the darkest places, it sparks equally dark music. And it can feel truly liberating and cathartic to work on, and play such songs.

Many thanks to everyone from In Crucem Agere for this interview! Check out their music on Bandcamp, and don’t forget to follow the band on Facebook and Instagram.