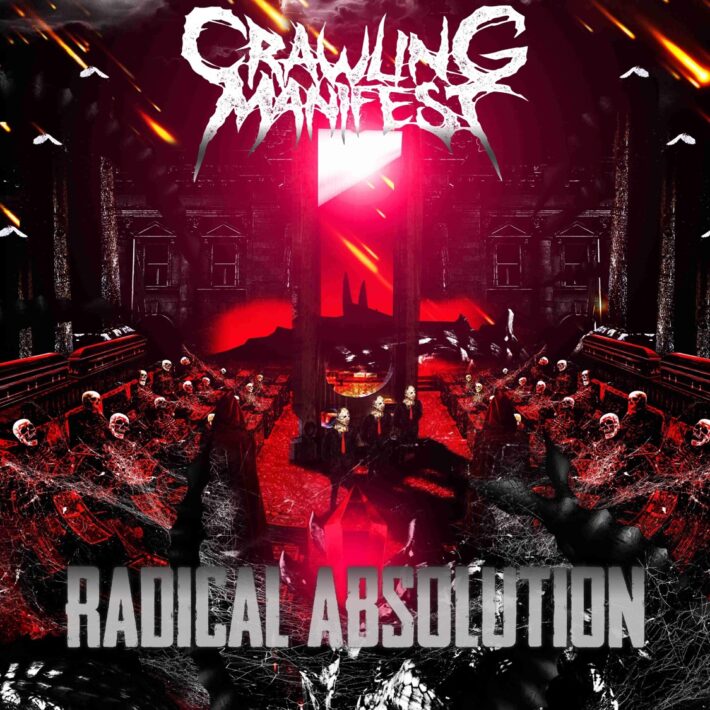 Regardless of whatever else I say here, Crawling Manifest is a great name for a metal band. Too many bands are named something like Sanguisugabogg, which I have never once bothered to learn to spell or pronounce, or give themselves a name like Horn or something else that they have to share with a dozen other bands. Crawling Manifest? Not only is it unique and evocative, it also gives you a hint as to the type of relentless thrash present in their sound.

Crawling Manifest meant for their second full-length release Radical Absolution to be a “modern take” on various flavors of thrash metal. They blur the line between taking influence from and being derivative of the elders of the genre to the point that it’s a problem. The songs all consist of fairly short and punchy riffs and remain aggressive from beginning to end with a few exceptions. No surprises or twists here. You want thrash, you get no-frills thrash. This record also feels very honest, and gives the listener exactly what’s on the tin.

Speaking of those riffs, they bring great pleasure. Crawling Manifest reveal their talent in writing short, punchy statements and drilling them into the listener’s head. Their riffs keep the music falling forward. The songs seem to be continuously marching towards the next moment, the next solo, the next chorus. This sort of continuous energy is a staple of thrash, and Crawling Manifest do a good job of keeping their music interesting despite the somewhat uniform tempo and style on Radical Absolution.

One of the big breaks in style in shorter thrash songs are the guitar solos, and the magnificence of Crawling Manifest’s are the high point of the record. These solos maintain the high-energy of the rest of the track and occasionally become blistering, but the guitarist avoids the typical pitfall of playing too many notes too fast and not allowing for any musicality or purpose. Instead they give pauses when needed. The solos make sense and always brought a smile to my face.

Some odd choices begin to unravel the album. The fourth track, “Right To Refrain Silence,” ends with about thirty seconds of said silence. While this may have been intentional, it’s an awkward speed bump that throws the album’s energy out of whack. Another immersion-breaking event happens just a few tracks later, as the guitar tone completely and abruptly changes at the beginning of  “Revolution.” It’s not bad, just odd and unnecessary. The vocals also vary in quality. The quieter vocals at the beginning of the title track throw me off whenever I listen through the album, and feel oddly out of place despite blending with the feel of the track fairly well.

Those minor issues don’t cause too much distress, but bigger problems lurk within Crawling Manifest’s politically charged proclamations. Sometimes I will feel like the band is just as surprised as I am with where the music is going. A track will abruptly end, or a syncopated chorus will just start, and it feels jarring. The riffs feel smooth and natural, so the reason for this eludes me. Additionally, sometimes Crawling Manifest’s influences overwhelm their sound completely. Several times throughout every listen of this record, I would stop paying attention to the music for its own sake and start to try to figure out what song the band was aping. The worst case for this was the title track. Sometimes a song just reminded me of earlier songs on Radical Absolution, as the similarly-syncopated choruses started to sound stylistically stagnant after a while, but sometimes I could swear I’d heard the track from another band before. I don’t have a problem with being derivative until it gets in the way of listening to the music.

The best thing about Crawling Manifest is their name. That doesn’t mean their music is bad, it just isn’t top-tier thrash. If you’re looking to fill a Power–Trip-sized hole in your heart, or if you want to headbang, listen to short and to-the-point riffs and solos, and then move on, Crawling Manifest may be for you. If you’re bored of thrash and want something that pushes the envelope, look somewhere else.