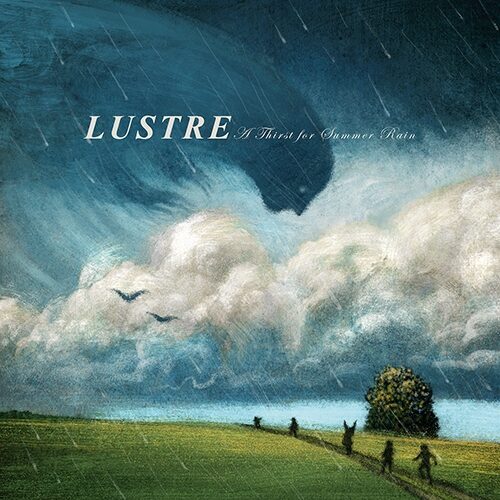 Similar to the tale told in my last review, I discovered Lustre several years ago thanks to a Youtube suggestion, this time courtesy of CountBlagorath. I was chasing any and all black metal recommendations, trying to learn as much as I could about this subgenre I had previously ignored. If I remember correctly, it was an end-of-year favorites video, and CountBlagorath mentioned that Blossom by Lustre was among his favorites of 2015. I promptly and saved the record, adding it to my listening rotation for later. As I was walking between college classes, I cued up the album, expecting a cascading wave of blast beats, tremolo picking, and screeching vocals. Instead, I was caught off guard with lush synths and gorgeous melodies that paired perfectly with the fresh snowfall and quiet atmosphere on that frigid Montana winter day.

At the risk of turning this review into one of those annoying internet recipes that tells you everything but the recipe, I feel the need to give context to my mindset while reviewing this album. I would consider Blossom as one of my favorite albums of all time, and Lustre remains in constant in my listening rotation. Without Lustre, I wouldn’t have discovered the likes of atmospheric black metal or dungeon synth until much later. All this to say, this review will not be objective (then again, what is objectivity when it comes to art?). This is from the perspective of a fan, who has and will continue to enjoy any musical output from this particular artist.

A Thirst For Summer Rain is the first Lustre album to be recorded, mixed, and mastered in a professional studio. It’s most notable when the the drums come in on the first track, with a punchy kick drum and a snare drum that sounds like a cannon. The guitars have much more body to them overall, and far more subtle details are more pronounced on the synths. I was initially caught off guard with the astounding change in production value to this album. Returning fans might feel the same way. After seven albums produced in the manner that they were, I became comfortable and simply associated that as part of Lustre’s sound. The weight of the drums and guitars still knocked me off balance, despite knowing it was coming (thanks to the promo kit). Once the initial shock wore off, I realized that from a compositional standpoint, it’s still very much Lustre. All the key components that I loved on previous albums are present on this one; gorgeous melodic themes explored slowly over eight-plus minutes, a simple drum pattern that stays out of the way, and layers of guitars and wordless vocals added for texture and atmosphere. The amount of detail that can now be heard is incredible. As the synth ripples, it’s bouncing between the left and right channels, subtle enough that it’s easy to miss. It becomes another layer to Lustre’s deceptively complex compositions. Counterpoint melodies weave in and out, rather than simply blending in. The hi-hat, guitars, and vocals can be heard distinct from one another, as opposed to washing each other out. It’s like looking at a picture of nature; you know how beautiful it is just looking at it, but seeing it in person is something else.

A look at the album title and artwork give the impression of a more “positive” or “uplifting” type of sound. And that is relatively true. Lustre seems to be aiming for a contemplative and reflective direction. There is no hurry to end the song, or build to an epic climax, just walking around and seeing where it ends up. The occasional harsh vocals and guitar chords still add darker colors to it all, as if hope is possible, but it’s not always a clear picture.

A Thirst For Summer Rain is another excellent showcase of Lustre’s musical magnificence. A sonic tapestry woven with beauty, clarity, and grace. Its simplicity sits on a mountain of subtle complexity, each discovery increasing the appreciation of it all. An artist that is woefully underrated, perhaps this album and its upgraded production value will reach a wider audience and amaze more than just the likes of us.