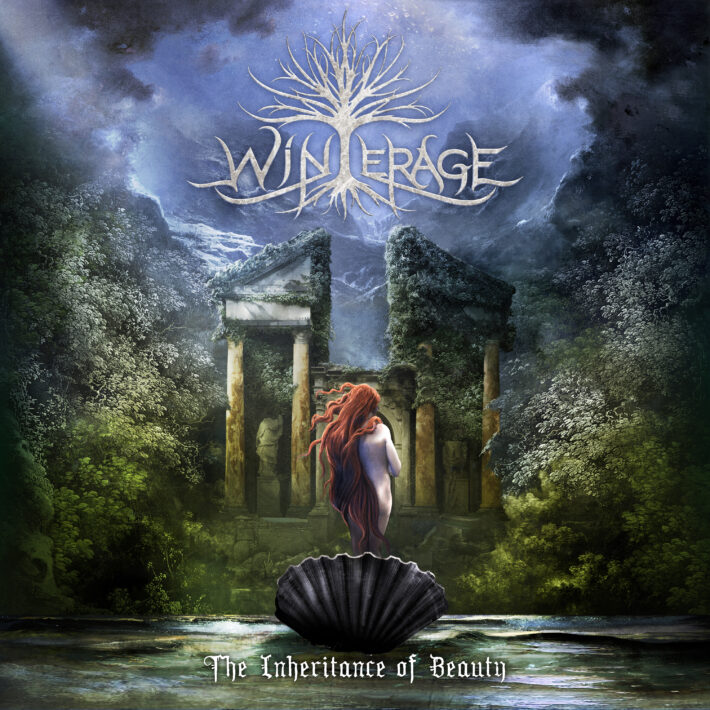 Being musically risky and daring creates great albums. Stretching the boundaries of what you are able to do produces the moments that people remember for years. On the other hand, directly copying your sound from a popular band allows you to present audiences with something that they already know, while (hopefully) providing your own tasty spin to the sound that others have mapped. Trying  to do both at once presents some problems that are apparent on their face. That didn’t stop Winterage from trying.

Winterage are a symphonic euro-power metal band that sounds suspiciously similar to Rhapsody of Fire. In some ways, their second album The Inheritance of Beauty sounds more like Rhapsody of Fire than recent Rhapsody of Fire albums do. Herein lies sweeping and scale-y riffs, belted and catchy choruses, touching operatic moments, and endearing, heartfelt honest moments. According to the promotional material, the “theme of the album is the fight of beauty against decadence,” which seems to play out musically in the interplay between the more frantic metal moments and the introspective folk and classical moments.How well that works is an exercise best left to the listener.

I mentioned above that The Inheritance of Beauty, in some ways, exceeds the current iteration of their ancestor in the genre. Winterage absolutely nails the quieter parts of their sound. “La Morte di Venere,” in particular, brings a sense of longing and sorrow that most metal albums without “folk” in their genre tag can’t touch. The members of this band clearly have talent oozing out of every orifice, you can’t reach the heights that this release reaches at points without talent and a lot of work. The heavy use of orchestration and the multitude of instruments present allows Winterage to branch their sound out in many different directions. In theory, this album should never bog down or grow stale.

In practice, however, The Inheritance of Beauty both bogs down and grows stale. This album feels gigantic and exhausting, and the hour-plus runtime does not help. However, most individual tracks linger past their ideal stopping point as well. Very few bands keep a captivated audience for the length that Winterage tries to. Especially egregious here is how early fatigue sets in. If you’re going to start with an extravagant opener, and end with a gallant sixteen minute epic, I shouldn’t check the clock during the early, relatively concise tracks as well.

Let’s talk about that closing track, “The Amazing Toymaker.” Ending your album with that long of a piece, especially one that both quotes Tchaikovsky and involves quite a bit of spoken word, makes quite a statement. It tells me that the band is so confident in their album that they are willing to take risks to their breaking point. Unfortunately they went quite beyond that. This track leaves a sour taste in the listener’s mouth as they step away from the record. The spoken words feel like a waste of time, nothing seems to lead to anything, and there isn’t a good payoff to the rest of the album or to the track itself. I don’t like focusing so much on one song, but when it’s the grand culmination of everything up to this point, and it takes up around a quarter of the album’s excessive length, I can’t ignore how utterly this track failed to maintain my interest.

Winterage have scattered many great moments throughout this release. They just don’t come together. Every time I’m impressed by a riff or dazzling passage, it meanders and overstays its welcome. Every catchy chorus feels slightly too subdued and out of place. Every poignant moment fails to mix with the surrounding bombast well. There is a lot to love here, but I just can’t forgive this album its flaws.

The Inheritance of Beauty is less than the sum of its parts. I hate being as negative as I have on this review, especially on an album that the band obviously poured a lot of time and emotion into, and on one with such obvious and enticing bright spots. Hopefully on their next release I will instead be praising one of the new rising stars of the genre. But for now, Winterage kept stretching and stretching their sound until it snapped.