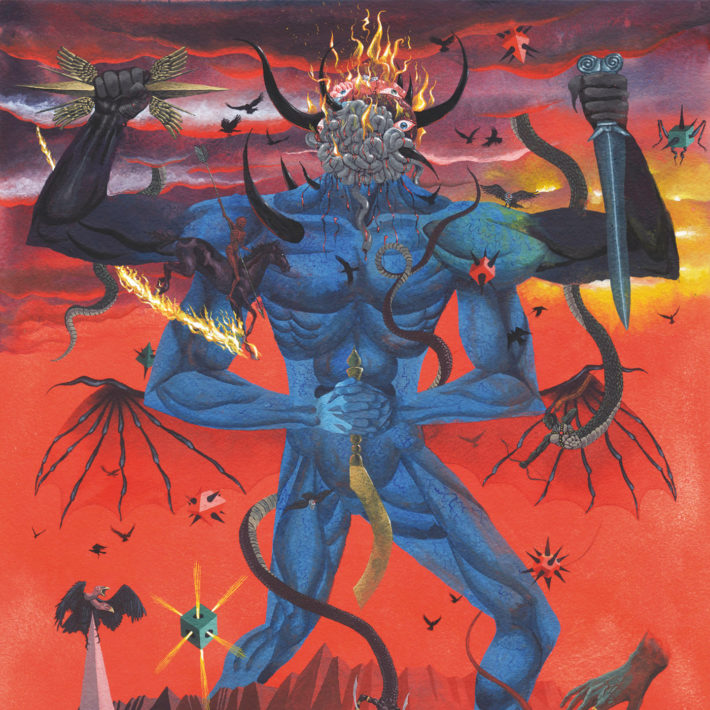 Some time ago, I was looking for bands that made the kind of dense, raw black metal, that listening to it is almost scary. While looking through the upcoming albums, I came across Esoctrilihum and I thought: “if a band names their album The Telluric Ashes Of The Ö Vrth Immemorial Gods, it has to be some black metal.” And while still unsure whether the “Ö Vrth” in the name is a typo or if it just makes the album extra trve kvlt, I can definitely say that this is one of the most dense, spacey and evil black metal I’ve come across in a long time.

Esoctrilihum is a one man project from France and this record, which will be released May 24th, is his fourth full-length album already in two years. And it’s not like they’re 30-minute releases, each one is around (or more than) one hour long and they also happen to be very well-produced. The label states that Asthâgul, the mastermind behind the band, has “the rare ability to perceive otherworldly, grotesque dimensions of cosmic horror and represent them in a very concrete and convincing way.” And even though labels often have the ability to describe music in a romanticized and exaggerated way, this description fits the music perfectly. The music is both really spacious, as well as astonishingly claustrophobic. The echo on the record makes it sound as if you’re actually in outer space, while the repetition of piercingly dissonant riffs remind you that you’re all alone out there.

I discovered that it’s a one man project after I had already listened to the record a few times, which made me appreciate the album even more than I already did. The music kind of transcends the tracks. That is, even though the album is divided into different songs, you really experience it as one work of art. There are moments where the music stops in the middle of a song and continues in a different style, but there are also times when you don’t notice the transition between songs. The music has a lot of layers: apart from the classic guitar/bass/drums/vocals line-up, there’s also a lot of atmospheric sounds that make the calmer passages really mysterious and the louder parts even more dense than they already are. On songs like Stone of Static Void, there’s also a piano, and on other songs (Black Hole Entrance an Torment of Death for instance) the music is accompanied by the agonized screams of a woman. And talking about screams, Asthâgul’s vocals are really diverse as well. Most of the time, he has a relatively deep grunting voice, but there are also parts where he has higher-pitched grunts, there’s whispering, and there are parts, on Stone of Static Void for instance, where it’s like he’s conjuring up some kind of otherworldly spirit. There are classic black metal passages, but there are also songs on which the music leans more towards death metal (on Aborted Sun, for example). So the record is diverse in many ways.

In short, Esoctrilihum’s upcoming record is dense, evil, and very intense. The production is done really well, making it a really dynamic record. The fact that it’s a one man project makes the complexity of the music even more impressing, there’s so much to be heard that every time you put it on, you hear new riffs and details. The album is like a ritual, transporting you to another dimension for the hour and fifteen minutes that it lasts. It’s a challenging, but rewarding experience. Highly recommended for anyone who likes well-produced black metal that’s more than just music.