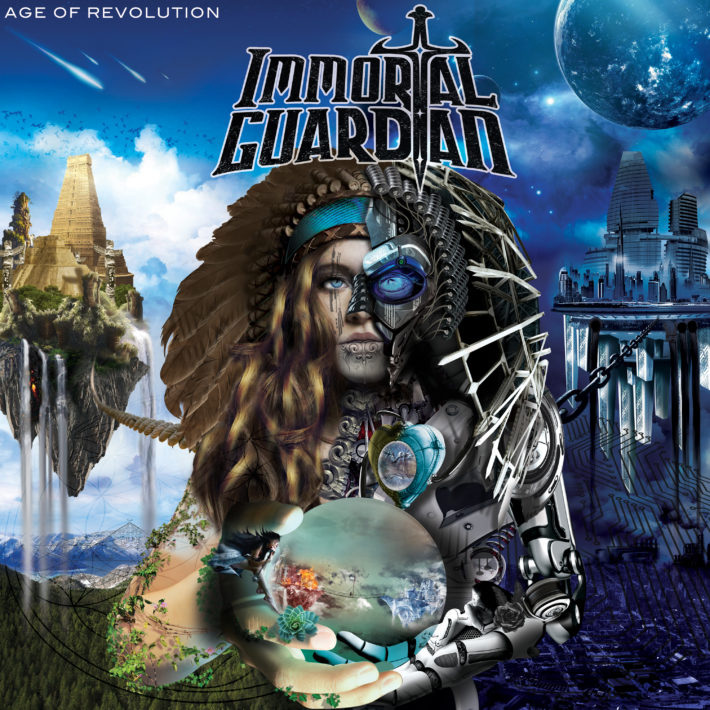 Technicality, diversity and power. These three words roughly summarize Immortal Guardian’s new album Age of Revolution. What stands out the most after listening to the album a few times is that the band members are extremely skilled musicians, not only in playing their instruments, but also in composing music with a wide variety of instruments. Normally, I don’t listen to power metal very much, but after hearing one song, it was so hard to turn it off that I listened to the whole album, and man, am I happy that I did!

And why was it so hard for me to turn off? Well, in principle, they’ve got quite a basic power metal sound, which could lead to the music getting boring after a few songs, but because of the many instrumental intermezzos (in which they display their awesome instrumental skills), they stand out from other power metal bands and make sure the record doesn’t get repetitive at all.

Besides the band’s great skill in playing instruments, the vocals are also worth mentioning. There’s so many different kinds of voices, all coming from the same singer, Carlos Zema. He can switch between a deep voice, very high notes, harmonies with multiple voices and even grunting, sometimes even within one song.

With the album’s opening song, Exitāre, which is an intro on piano and strings, Immortal Guardian immediately shows their ability to deviate from the classic power metal sound. However, the relaxing piano intro quickly turns into a robust power metal song, proving that they do fit into the genre. While the first few songs are pretty straightforward power metal songs, they also have progressive metal influences, especially in the intros and solos. In Aeolian, for example, the intro really reminds of Liquid Tension Experiment, a prog metal band with the members of Dream Theater.

When the album threatens to become a bit repetitive after a few songs, Never to Return happens. The first half of the song kind of follows the same template as the earlier songs on the record, but after a while, the sound changes to a more prog metal sound, displaying a broad arrange of instruments, like a flamenco-like piano, screeching guitar shredding and even ending with a sensual saxophone/guitar duet.

The album’s eighth song, Fall, is also quite an interesting one. It starts with a piano and a cello, playing a dramatic introduction, after which Zema’s deep voice joins in. After a while, a flamenco-like guitar and drum beat start playing, building up the tension in the song and after a bridge with double vocals that remind of System of a Down, there’s an epic chorus, with layered vocals, an awesome guitar riff and a powerful drum beat, taking the term ‘power ballad’ to a whole new level.

And as if the ballad wasn’t powerful enough, it’s followed by State of Emergency, a really prog metal oriented song that takes the tension to critical levels. The sound rapidly changes from fast riffs to distressful, almost screaming vocals, a more typical power metal chorus, and fast solos that even have djent influences.

Awake, the record’s final song ends with the same piano melody as the intro, so if you play the album on repeat, it perfectly flows into the intro, making the album cyclical. With this, the band made sure that their first full-length album is just as everlasting and immortal als the band’s name.

In conclusion, Age of Revolution is a really diverse power metal/progressive metal album that definitely doesn’t get repetitive. Even though they do have quite a basic general power metal sound, it does get alternated with many progressive metal instrumentals and solos. While some parts of the album could seem a bit chaotic, this is what keeps the album from getting boring. In the end, I’m happy that I gave it a chance, because it’s a really interesting and entertaining album by a very skilled band.