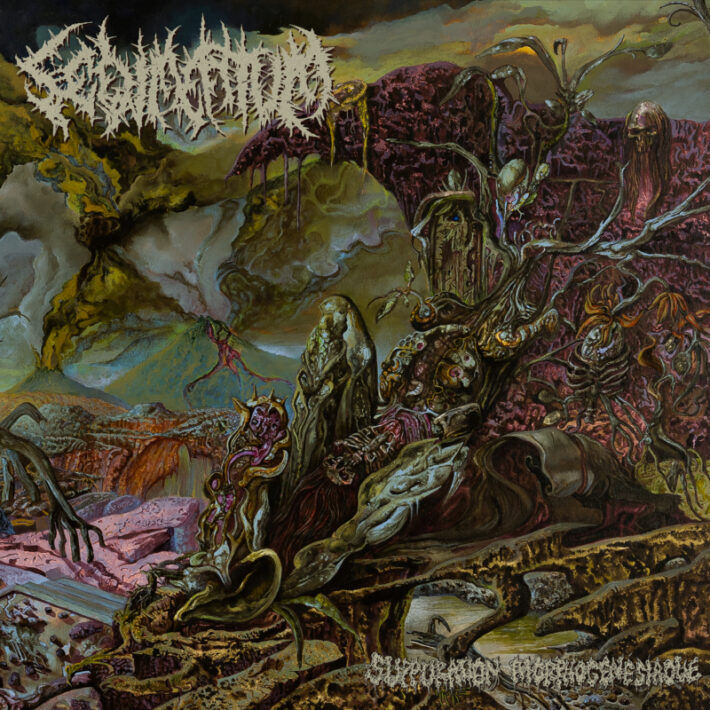 Pardon my French, but this album is fucking sick.

Hailing from Quebec City, Sedimentum are easily one of my favorite things to come out of French Canada. The band features the guitarist of Outre-Tombe taking a starkly different approach to death metal on this project. The best way to describe Sedimentum’s sound is to simply gaze at the cover: a filthy, grotesque panorama by the legend Brad Moore. Suppuration Morphogénésiaque is a gross, swampy record of the most depraved death metal imaginable.

The record kicks off with a kick in the balls, “Krypto Chronique II” hits hard and fast, and gives the listener their first taste of the swirling, rumbling low end on this record. Seriously, I wanna know what they have that bass hooked up to because it’s a beast. The low end adds so much weight and power to each riff, it’s actually incredible. Even the most veteran death metal listeners will be impressed by how these guys sound. “Excrétions Basaltiques” takes a mid-paced lurch into a repulsive d-beat section while the rhythm guitar relentlessly churns the muck this record is submerged in.

During a brief respite, clean guitar on the title track brings to mind death-doom upstarts Worm and their repulsive album Foreverglade from last year. Fitting that both albums have Brad Moore covers that perfectly depict each record’s nastiness. The title track features a long buildup into fast half-time chaos, before slower riffs hit harder than ever, bashing the listener repeatedly with punishing yet addictive riffing.

Interestingly, the use of motif riffs across songs helps to make this record feel even more like a crawl through murk. Hearing similar crushing riffs separated by sections of dynamic variation causes the listener to feel trapped in the best way possible, like knowing it’s only a matter of time until the beast tears you apart. The up-tempo chaotic sections on Suppuration Morphogénésiaque feel like a murkier Tomb Mold, and in a way, they make me think of Danish death metal, specifically the swirling atmosphere of Phrenelith’s debut record. Sedimentum have all the muck of Worm and the chaos of Phrenelith, all with the crushing weight of a band like Spectral Voice.

The churning low end is especially notable on “Supplice”, a seven-minute crawl that begins slowly, only to gradually rise out of the murk like a hungry swamp creature. This whole record is monstrous, particularly thanks to the outstanding vocals here, which rest nicely in the low register. The vocals are placed just right in the mix, with enough reverb such that while listening you imagine a creature, rather than a vocalist, making those sounds. The closer track “Un Grotesque Panorama” takes us down a rumbling mid-paced stomp highlighted by great cymbal usage. The drummer is killer throughout, but the particular use of the cymbals really stands out. Hell, everything about this record is great. It perfectly encapsulates the dreadful, disgusting atmosphere that the band was clearly going for, and I have no complaints. My only question is, why is this not coming out on a Friday? Who at Me Saco Un Ojo relegated these guys to a Monday release day? That’s an injustice. I’m seriously hoping this record gets the attention it deserves, because it’s great.