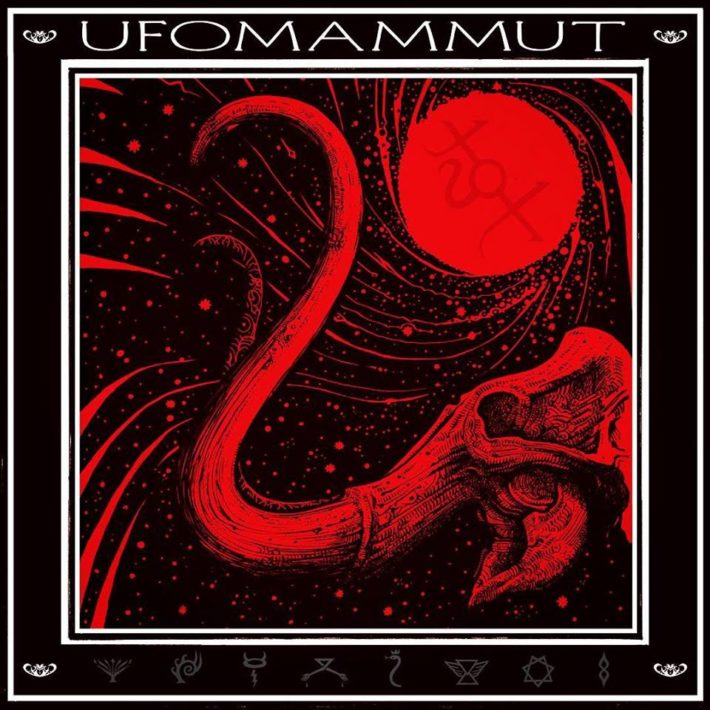 This year, in 2019, the Italian stoner doom band Ufomammut celebrate their 20th anniversary. To do so, they’re on an international tour where they visit both clubs and festivals and they play a special set. Or actually, two sets. And thanks to Earsplit PR and Rarely Unable I was lucky enough to attend their show in Doornroosje, a venue in the Dutch city Nijmegen.

A few minutes before the band started playing, the hall was already pretty full with people. People weren’t crammed together, but there was a good crowd. Even though the band members hadn’t appeared yet, you could already see the giant custom -Green- Orange amplifiers, guitarist Poia’s awesome electric guitar, vocalist Urlo’s bass and a synthesizer with a pedal board that wasn’t on the floor, but at hand level. There was also a typical 50’s microphone and the crowd was kept entertained by the psychedelic projections on the back wall.

Surprisingly, when Urlo and Poia entered the stage, they didn’t pick up their electric guitar and bass. Instead, Urlo walked to the synthesizer and Poia picked up an acoustic guitar from behind the curtain. They waited for a bit before starting to play and meanwhile, the crowd was exceptionally quiet, everyone holding their breath for what was to come. The first set resulted to be an acoustic set, with very minimalist music. Poia played some riffs on his guitar over which Urlo sang and played the synth. By the way, the microphone was also connected to the pedals at his hands, making for some pretty spacey vocals. After a while, drummer Vita joined his companions, building up the music by adding some light drums. Slowly but surely, the concert started to liven up and the crowd, as opposed to when the concert started, was already banging their heads to the groove of the music.

After about half an hour the first set was complete and there was a burst of applause. Then, Poia picked up his electric guitar, Urlo his bass (which, by the way had a leopard print guitar strap :P) and Vita took off his shirt, promising for an intense set to follow up the first one. And intense it was! It was loud, heavy, the bass literally blew the crowd away and the guitars were raw. One of the things that really impressed me was the fact that they had so much groove, but at the same time were playing in the oddest of time signatures, like 5/8th, 7/8th and even 15/8th. Poia did the sound effects live on a pedal board, making the music complete. Now not only the band, but also the crowd was really feeling the music (this time figuratively, I’m not talking about the bass). Everyone was banging their heads to the music while getting totally absorbed in it. Ufomammut was here to show both sides to their music, first their emotional and minimalistic side and then their loud, groovey and intense side. It was a show that’s definitely worth remembering, if they ever play in a venue near you, I’d highly recommend going to see them!