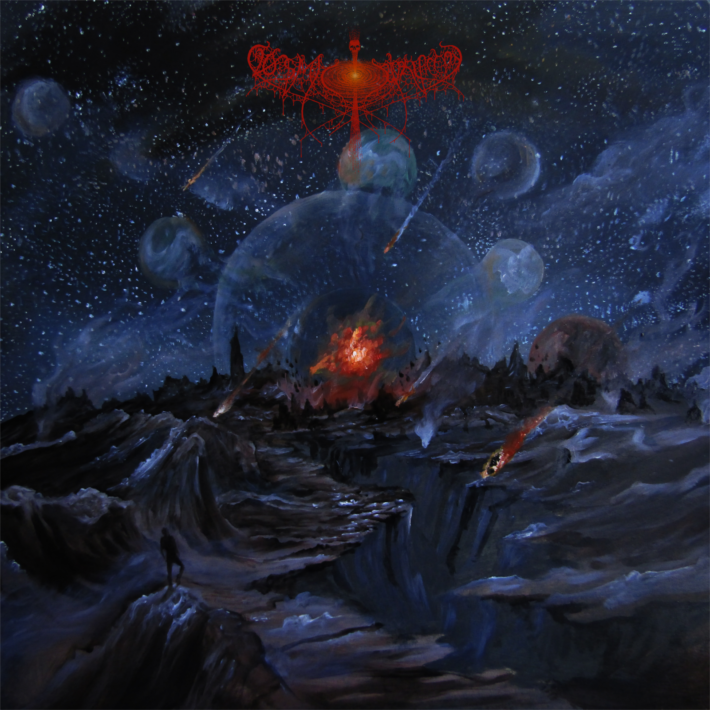 Cosmic Putrefaction is a young band. They were formed in 2018, and this is already their second release. A resume like that raises all sorts of red flags: Is the band too raw, are they just dumping out releases, do they know how to make a cohesive album, and more questions along those lines. Fortunately, none of those end up being problems on this release. Unfortunately, some unrelated issues arise.

The Horizons Towards Which Splendour Withers is a death metal album. Since that is nowhere near enough specificity for most of you, it is a cavernous death metal album in the vein of Dead Congregation, and has an atmospheric black metal influence. Everything that Cosmic Putrefaction has presented leans towards low-toned, distorted, frantic grime. Lyrically, the album seems to be quite interesting. Given the name of the band and the album, you may have guessed that this is not a happy album.

The vocals are fantastic. Sole band member Gabriele Gramaglia manages to bring his grunts impressively close to the dark burps normally found in the realm of Demilich. He has complete control of the sound, rising to something closer to a shriek when the sound requires.

The production is great as well. The danger of the album being a muddy, incomprehensible mess loomed over my first listen, but that was an unfounded concern. Everything is precise and clear, without any loss of the dark, claustrophobic sound that Cosmic Putrefaction was clearly aiming for. This sounds exactly as I’d want it to sound. The Horizons Towards Which Splendour Withers, at its worst, manages to stay out of its own way.

I mentioned an atmospheric black metal influence, but to be honest, it’s buried pretty deep in there. You can hear it digging its way to the forefront mostly in the quiet sections where the death metal has temporarily parted (or at least lessened). There, the corpse paint cautiously creeps forward. These moments provide some variety for this very thick album and give it room to breath. I might not have suffocated without them, but the space is appreciated as it gave me a chance to digest what I just heard. In general, the atmosphere on The Horizons Towards Which Splendour Withers does its job. Everything moves around seamlessly as sounds fade in and out, and the backing music never falters. The last track, “Utterance of the Fall of Man,” goes a little overboard with the atmospheric spooky sounds and could have used a little more backbone, but this release commits no unforgivable sins in this category.

The Horizons Towards Which Splendour Withers reminds me a lot of Dead Congregation’s Graves of the Archangels, to the point that I have yet to listen to this new release without having my thoughts wander to the elder album. There are a lot of similarities: Both are cavernous death metal albums, both flirt with brutality without moving fully into the style, both place their primary focus on their atmosphere, and I think both end up being kind of boring. The atmosphere provides a fantastic background, but nothing ends up taking mainstage. Listening to Cosmic Putrefaction ends up feeling like going to a concert that the band bailed out of, but that is in an amazing venue. The seats in the back are comfy, the beer is cheap, there is a raging mosh pit. The only thing missing is the primary purpose of the event.

Everything on The Horizons Towards Which Splendour Withers is stretched out a bit too much. This is not a long release, but it still feels like it should have been just a bit shorter. The tracks all last ever so slightly too long. Again, this is not an unforgivable sin.  If you’re at the bandless concert, and you notice that the lights keep flickering on and off, it isn’t the worst thing in the world. But there’s no reason to be there, why would you stay? I suspect the plot was supposed to be the prime focus of the album, but that is the issue with death metal: if it wasn’t for the promotional material, I wouldn’t have had a goddamn clue that there was even a plot here. It’s a shame, because it actually looks quite interesting and well thought-out. It’s just not what I focus on when listening to the album.

Ultimately, The Horizons Towards Which Splendour Withers slightly missed. It had no large flaws, it just also didn’t have a reason to exist. If you’re looking for nasty death metal within the seemingly endless flood of black metal being released at the moment and you gasped in horror at my thoughts on Dead Congregation, or if you’re interested in concept albums, check it out. Otherwise, I’m not sure if this will do anything for you. Between the atmospheric elements, the brutal elements, and the thematic elements, it sounds as if this album reached just beyond what it was able to accomplish. Hopefully with a little more experience, Gabriele’s next release will hit the mark. I’ll be here for it.