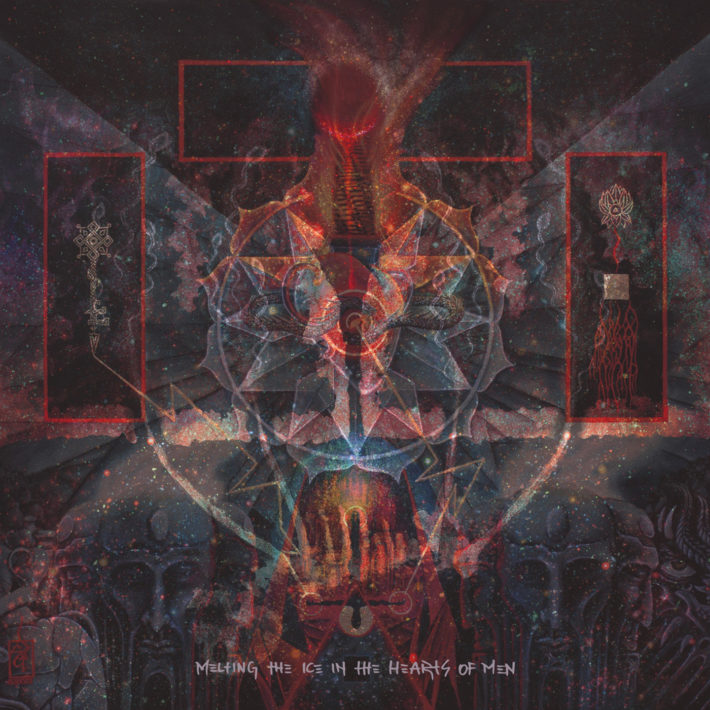 When a label/band has difficulty describing its own music in words, you know you’re in for something unique. With Our Survival Depends On Us this is the case and the music indeed has a numerous influences, ranging from metal to tribal music, to ambiental soundscapes and everything in between. There’s a huge variety in the music and this clearly comes forward on their new album Melting the Ice in the Hearts of Men. The record has had an interesting writing- and recording process. Back in 2017, the band retreated to the mountains of Salzburg, where they rehearsed their music intensely. A few months later, they recorded the tracks in the same city, after which they did some additional recordings and overdubs. Lastly, they moved it to post-production in May, 2018, which lead to the creation of this album. I think the withdrawal into the isolated mountains for rehearsals can really be heard in the music. In spite of its many influences, they have a very typical sound, and the image of them rehearsing so intensely with one another really fits the music.

Before listening to their new album, I hadn’t put on any of their older albums, because I wanted to hear it with as little expectations as possible, I wanted their sound to surprise me. Of course, I had heard good things about the band, which is why I decided to review the record, but I didn’t know what it would be like. In general, I was very pleased. It’s a good album with a wide spectrum of sounds that they alternate really well. Each of the record’s four songs lasts over ten minutes and each has a unique sound. There’s still coherence within and between the tracks, but there’s also huge differences in sound and ambience.

The only downside of the album, in my opinion, is its long-windedness. I’m usually really patient listening to music, but at times, it takes too long before the band moves on to the next section of the music. Even though it’s a full-length album, in my opinion it could have worked just as well, or maybe even better as a 25-minute EP. The last track, Sky Burial, is the perfect example for this long-windedness I’m trying to describe. It’s a good track, but it doesn’t work well as the end of the record. It consists of seven minutes of well-created minimalistic soundscapes that build up to a more elaborate section with guitars and after a while, it fades out into an outro that ends the album. Even though it’s well composed, it kind of feels like a track that should lead up to something, but doesn’t.

Apart from its lengthiness, however, the album’s got a great structure. In one song, the sound can change from dreamy and intriguing soundscapes to distressful sections with agonizing vocals to fast guitar solos and back. And all that while maintaining a coherent whole. Gold and Silver, the album’s second track is a good example for this. The song starts with an otherworldly intro, using a synth over a groovy drum beat. After a while, the guitars join in and there’s an almost tearful voice, that kind of reminds of Anomalie’s Marrok. After an impressive guitar solo, the music goes back to its minimal atmosphere and slowly builds up more and more in intensity. The guitars play louder, more instruments are added and the vocals get rawer and rawer.

In short, Melting the Ice in the Hearts of Men is a well-composed and interesting album. It’s got a wide variety of instruments and sounds, making it very diverse. Despite the many changes in musical style, it’s a coherent album. In terms of length, in my personal opinion it might have worked better shortened to a 25-minute EP (especially the last track), but apart from that, there’s little to complain about. For a relaxed, but intriguing listening experience it’s really recommended to give it a spin!