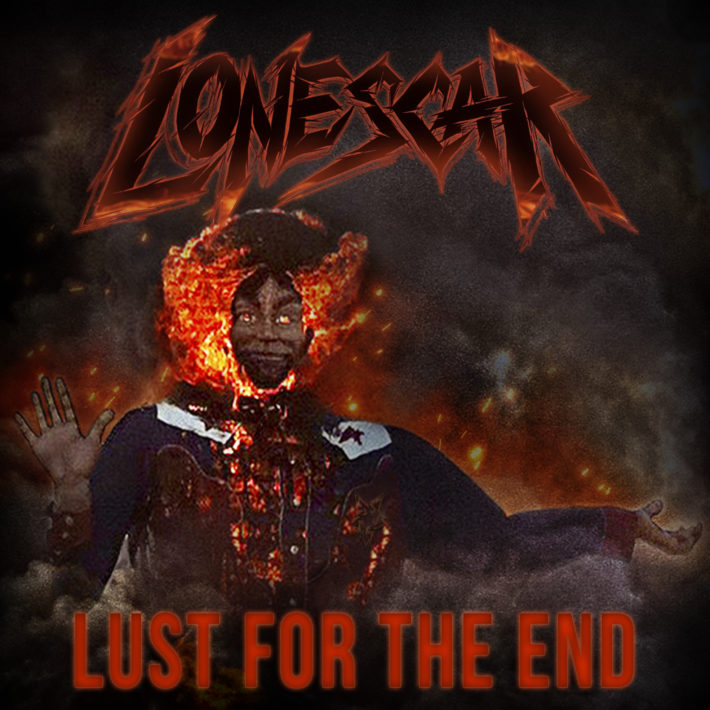 Lonescar is a young thrash metal band out of, not surprisingly, Texas. Texas has produced a few good and successful thrash metal bands in recent years, not the least of which are Creeping Death and Power Trip. Lonescar hopes to be the next band out of Texas to find success with fast grooves and growling choruses.

Lonescar’s debut album Lust for the End is a thrashy groove metal album that sounds something like the lovechild of Gojira and Power Trip with extra breakdowns thrown in. The songs are mostly formulaic, but that doesn’t necessarily mean that they’re bad. Lonescar tries to  catchy choruses and aggressive riffing attempt to circumvent the somewhat stale groove metal formula and create blood boiling music.

Most of the musicianship on this album is acceptable, most of the time. The drumming by J.C. Hernandez is quite good, and provides most of the energy for the album.  The drum patterns were varied and interesting throughout. I never got bored of listening to the beats. The rest of the band, however, are inconsistent. The vocals, for example, wear thin after not too long at all, and I don’t remember being blown away by the guitars or bass. Nobody is terrible, but I was really only impressed by the drumming.

In terms of songwriting, Lonescar consistently uses syncopation to their benefit. They will hit a given syncopation hard, and keep using it in a similar space throughout a given song. When they finally stop and play on the beat, it is a seismic, head turning event. Lonescar definitely knows how to draw the listener’s attention to an exact place. At first I thought they overdid this effect, but upon subsequent listens it added a sense of identity, and I didn’t ever really grow tired of it. In general, Lonescar are great at bringing songs to a climax, and when they manage to perform these climaxes effectively they bring great fun to their songs.

I mentioned earlier that there are some breakdowns here. They are bizarre. Throughout the entire album, but especially on the opening track, “Gluttonous to the Core,” the breakdowns seem to just give up. It sounds like Lonescar got halfway through writing a given, then decided to take a break and leave finishing the track until the next day, and then just never remembered to actually go back to anything.

The transitions throughout Lust for the End are awkward. As with the breakdowns, it feels as if Lonescar got about halfway through writing a transition and then gave up. The end result of all of this half-writing  is that the Lust for the End sounds very raw, despite its formulaic nature. They don’t get the benefit of following a well-tread path due to their songwriting, but they also don’t get the benefit of having a raw, aggressive sound due to the somewhat overuse of formulas. This is a rather unfortunate worst of both worlds combination.

A lot of metal will live and die by the riffs, and Lonescar is no different. It’s to their detriment. None of the riffs are anything special, and none of them really differentiate themselves well from any of the rest. Again, this is a problem that spreads out to the rest of the music. There isn’t enough to make any track stand out. There is just a lot of the same over and over again, and it gets tiring.