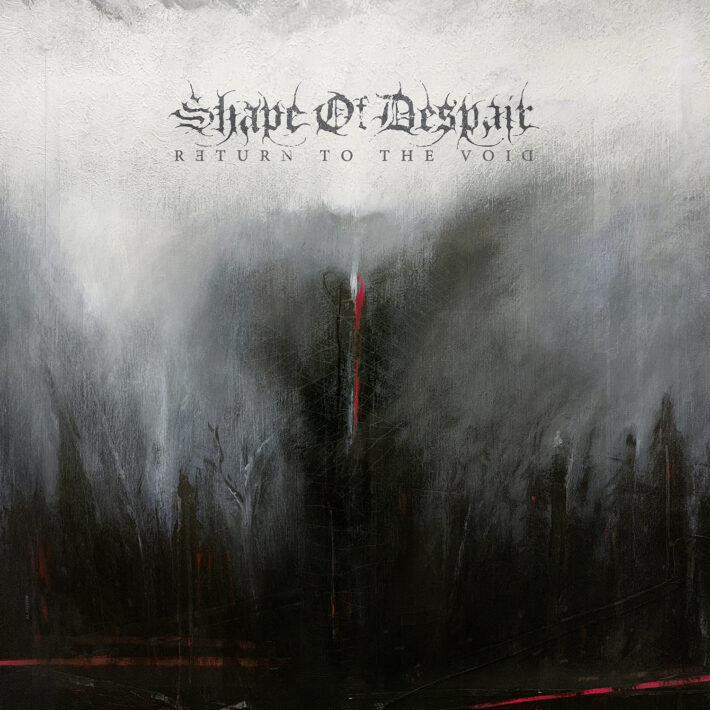 Funeral doom is weird. Characterized by its glacial tempos and dirge-like riffs, the genre can appear incredibly foreign to the uninitiated. Explaining it to someone is a difficult task, especially to the average metalhead. The genre can look like a gimmick at first glance, especially when bands like Bell Witch release 80-minute unbroken tracks with no guitars. In practice, however, funeral doom can be one of the most artful and expressive genres out there.

I’ll be the first to admit my experience with funeral doom is relatively limited – extending about as far as the aforementioned Bell Witch and Sweden’s Doom:VS. In general, I tend to prefer my doom with more of a gothic tinge. My heart beats for the likes of Paradise Lost, Draconian, My Dying Bride, and my all-time favorite doomers Saturnus. In researching for this review, I listened through Shape of Despair’s back catalog and found a collection of hidden gems. These stoic Finns are considered one of the premiere bands in funeral doom, and for good reason. Their fifth full-length Return to the Void comes almost seven years after the epic Monotony Fields, which itself came after a staggering 11-year wait.

Right off the bat, Shape of Despair hit us with a sorrowful guitar lead that will serve as a recurring motif throughout the album. The title track and “Dissolution” follow this path, with plodding riffs beneath a lamenting guitar lead and hymnal vocals. Highlights come in the middle of the album, with the emotional melody of “Solitary Downfall” serving as the closest thing to a chorus we get to hear. The song’s sorrowful guitar lead is one of the best, and the vocal performance tugs at your heartstrings. Atmospheric sections on “Solitary Downfall” and “Reflection in Slow Time” utilize keyboards to great effect, reminding me of gothic doom greats Draconian. Layered vocals on “Forfeit” and the final track “The Inner Desolation” harmonize in a majestic synthesis of clean singing and monstrous growls.

This record is pure atmosphere, and the instrumentation on this album serves it perfectly. Shape of Despair are masters of the style by this point in their career, capable of writing expressive lines that never feel out of place. Their mournful guitar harmonies float over crushingly slow riffs. Light keyboards and thunderous bass create a thick and enveloping atmosphere that pulls you into the deliberate rhythm of the guitar and drums. Every drum hit is weighty and distanced, reverberating as if from within an endless void. Henri Koivula’s thunderous gutturals juxtapose with his airy singing, and Natalie Koskinen’s majestic voice provides some much-needed melody.

Listening to Return to the Void feels like being transported into an isolated world of melancholy sadness. If you aren’t paying attention, the hour might fly by without you realizing. Songs can blend together due to the pervading atmosphere and the recurring motifs. There isn’t much to really grab your attention, there aren’t a lot of moving parts. Despite that, the patient listener will be rewarded with plenty of auditory nuggets peeking out from within the mix. These observations might sound like complaints, but they’re exactly what makes a funeral doom fan salivate. In fact, my minor complaints with the record can mostly be attributed to the limitations of the genre itself.

Shape of Despair are clearly competent musicians, and their many side-projects show they are all multi-talented. So, part of me wonders what magic they could conjure up beyond the confines of exclusively funeral doom. I might be biased, but I would love to hear a Shape of Despair record (or a similar project from these guys) with a bit more of a focus on melody, in addition to their characteristically morose atmosphere. They could potentially make a magnificent gothic/funeral doom album if they so desired.

That being said, however – fans of the genre can rejoice knowing the legendary Shape of Despair is releasing another great record. While I wouldn’t consider myself a funeral doom aficionado, I can appreciate the undeniable artistry present here. I certainly enjoyed my time with Return to the Void, and I will definitely be keeping Shape of Despair in mind for the soundtrack to a rainy day.