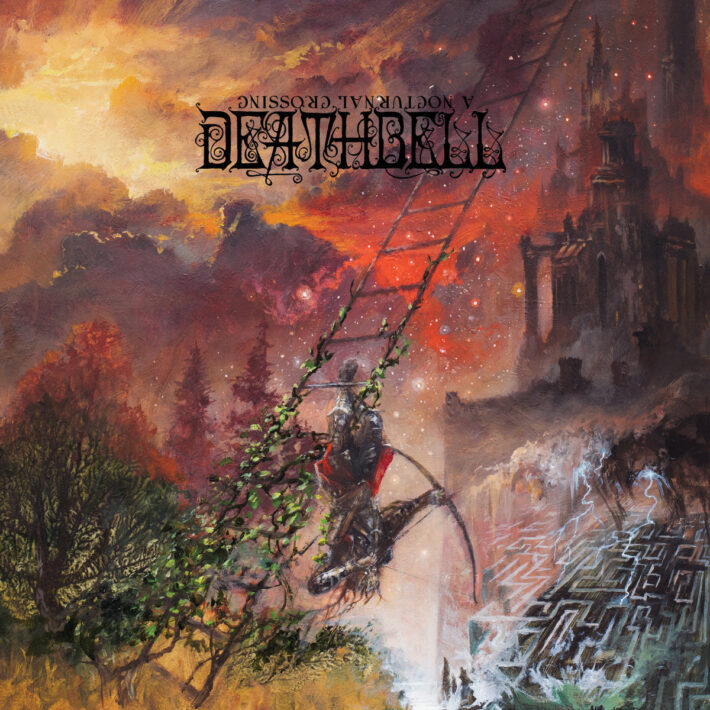 2018 saw the debut full length album by French doom outfit Deathbell with their release of With the Beyond.  As we race into the unknown with words like “uncertain, unprecedented and new normal” getting thrown around like beads at a Margi Gras parade, the year 2018 seems like a distant shadow in our rear view mirror.  Time has passed, things have changed, it’s 2022- how has Deathbell changed? Who were they and what have they become?  Surely the answers to these looming questions lie buried somewhere in their upcoming release A Nocturnal Crossing.

With the Beyond didn’t venture out into undiscovered territory.  Although it was a palatable listen, it was certainly a victim of the times within the genre of doom metal.   Deathbell ran stride for stride through the late twenty teens next to fellow female fronted bands like The Well, Windhand, and Black Road.  They even incorporated a featured organ to add atmosphere and heft to their sound shoulder to shoulder with the likes of Mount Salem and Blood Ceremony.  All of these bands are psyched, fuzzed out stoner doom, and all female led.  Standing above a sea of peers is a grand task for any band, especially on a debut.  Deathbell held their own and stayed afloat in With the Beyond.  They cooked with the time tested formula that calls for riffs beaten slowly and repeated indefinitely.  It’s a recipe that has been baked at 420 in hot rehearsal spaces countless times around the globe, it’s predictable, but it tastes good and is easy to replicate.

Distortion heavy, female led, organ augmented doom was a dime a dozen way back in 2018.  With the Beyond was a rain drop in a flooded genre causing it to get washed down the river of time, and perhaps getting lost in the shuffle.  This album wasn’t a stand out, but it laid a great foundation for things to come.  Either way – a strong debut.

Sand has slipped through the hourglass, globally many things have changed, the hamsters are off their wheel’s and taking stock of what’s around them, no longer perpetually racing on the endless round.  So how has Deathbell changed and adapted?

The first visible land mark of change to break the horizon is their method and ingredients.  Their upcoming release A Nocturnal Crossing shows a much more polished sound that leans on the atmospheric and does quite well with a layered mix, versatile wall of sound approach.  No longer are the songs riff-repeat.  The tunes shift with a smooth ebb and flow; a swaying doom veiled – almost altrock sound.  The songs are much more amorphous and create a foggy aura of grey melancholy that is lacking in their debut.  Emotion plays a lead roll on this sophomore release.  The two albums held side by side in the light shows With the Beyond to be more of a paint by numbers, whereas A Nocturnal Crossing allows Deathbell to choose the colors and tones even though they are a bit monochromatic.

A Nocturnal Crossing does need a punch, something to make it standout.  Just existing in the genre isn’t good enough anymore.  So many have already excelled and accomplished exciting, inspired things in this stoner doom genre.  Within this style of female vocals it is hard to rival someone like Dorthia Cottrell’s ability to swirl forth smokey emotion.  As far as rocket launcher power King Witch’s Laura Donnelly or Tower’s Sarabeth Linden are unmatchable in explosiveness.  The bar for female vocalists has been set so incredibly high that it’s increasingly difficult to feature a head turner of a vocalist.  Deathbell however seems to know this and wisely sinks Lauren Gaynor’s vocals deep enough into the mix that they exist to augment the atmospheric haze of the instrumental blend.   Not forcing the vocals to overpower and lead but rather using them as a dreamy utility is an aesthetically good choice.

Deathbell does an excellent job of creating a vibe and a feeling that is undeniable.  I think that “feeling” however should underscore something more tangible and exciting.  What they do, they do very well here; I just wish they used their melded harmonious sound as a platform for a six string wizard or a vocal assassin to jump off of.  I feel Deathbell needs a hallmark element.  They have evolved their sound and matured since their debut, it will be interesting to see their perspective and craft when they get one more rung up the ladder.  They found their genre in With the Beyond, placed the ladder and started to climb it with A Nocturnal Crossing, and hopefully will ascend to new heights on their next release.

Tracklist:
1. The Stronghold And The Archer
2. Devoured On The Peak
3. The Ladder
4. Silent She Comes
5. Shifting Sands
6. A Nocturnal Crossing