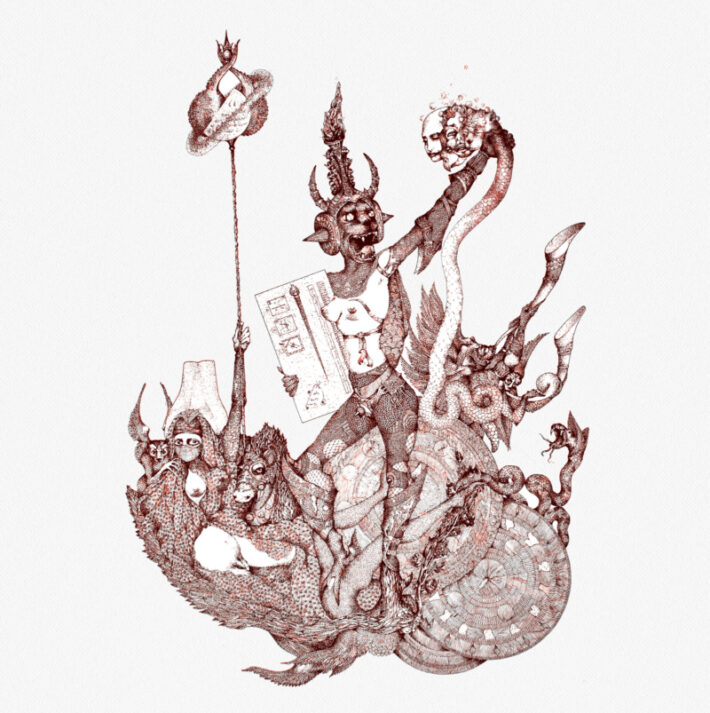 Every artist has a different working ethic. Some release an album and wait years before starting to work on the next one. Some put out records every two or so years. And then there’s Esoctrilihum. Esoctrilihum is the black metal solo project of the tireless Asthâghul. He releases album after album with the project. One might think the albums may be short, or the newer records may lack quality or inventivity, but the opposite is true. The majority of Esoctrilihum’s full-lengths are around one hour in playing time and each record is full of strong compositions, unique instrumentations and haunting atmospheres. This Friday, June 17th, is the release date of Esoctrilihum’s seventh full-length (since 2017, so he’s released more than one album per year), called Consecration of the Spiritüs Flesh.

The record fits well in the project’s impressive discography, yet there are a few aspects on which it differs from the rest. In the first place, it’s the shortest full-length Esoctrilihum has put out. Luckily, a ‘short’ Esoctrilihum album is still about 40 minutes long. It’s as if all the energy that’s usually spread over an hour of music is condensed into a shorter period of time, making it an extremely intense album. This brings us to the second difference: Consecration of the Spiritüs flesh is less focussed on atmospheric elements than its predecessors and seems more focussed on high-energy black metal. It still has an important atmospheric element, but the balance is different than that of the previous records. This is an example of how Asthâghul stays true to his project’s sound, while still taking the chance to innovate.

Asthâghul also communicated the topic of the record in the promo. At the beginning of the album, he’s fighting against the demons who have been following him from birth. At a given moment, though, he gives in and decides to join them. This renders his human life worthless, as he is inducted “as a black demon”. The intense darkness of the topic is definitely expressed in the music and the vocals, and it could be an explanation for the focus on high-energy black metal on the album.

The record starts off explosively, quickly building up the energy to the level on which most of the album will be. What attracts the attention is the recognizable, festering string melody that can be heard between the blast beats and distorted guitar riffs. It’s elements like these, among others, that give the music such an oppressive atmosphere. The vocals are agonized and expressive. Although Asthâghul is the only musician and thus the only vocalist of the project, there’s a variety of vocal styles (like grunting, screeching and shouting), which not only differ in sound, but also in intonation. This gives the listener the feeling of hearing multiple entities – maybe Asthâghul’s demons can be heard as well.

As stated above, the record is more focussed on black metal intensity than its predecessors, but its melodic elements still play an important role. This can be heard on “Thertrh”, for example, on which the main melody keeps coming back over the course of the track, creating tension with the accompaniment. There are also passages in which the drums switch the blast beats for a less intense drum pattern, while still following the cadence of the music. In these passages, the melody gets a more important role and the listener gets some room to breathe without losing the flow of the music. “Scaricide” is another example of the variation on Esoctrilihum’s new record. The drums don’t just play high-energy blast beats, but there’s also more groovy, headbangable drum patterns, and with those, the fast-paced guitar riffs become more groovy as well. Furthermore, the listeners’ attention is kept not only by the alternation in the guitars, drums and vocals, but also by the odd, almost undefinable echoing sounds in the background that start to stand out after listening to the song a few times.

In short, Consecration of the Spiritüs Flesh is an impressive record that fits in the same vein as Esoctrilihum’s earlier albums, without having the exact same formula as its predecessors. Asthâghul seems to have given the intense black metal element of his music the upperhand, whereas atmospheric passages play a less prominent role than in the rest of his discography. The music still has a lot of variety (both in terms of instrumentals as well as vocals) and the dissonant string melodies and odd sounds in the background crawl under the listeners’ skin. Whether you’re already familiar with Esoctrilihum’s haunting music or not, it’s highly recommended to check out his newest offering.