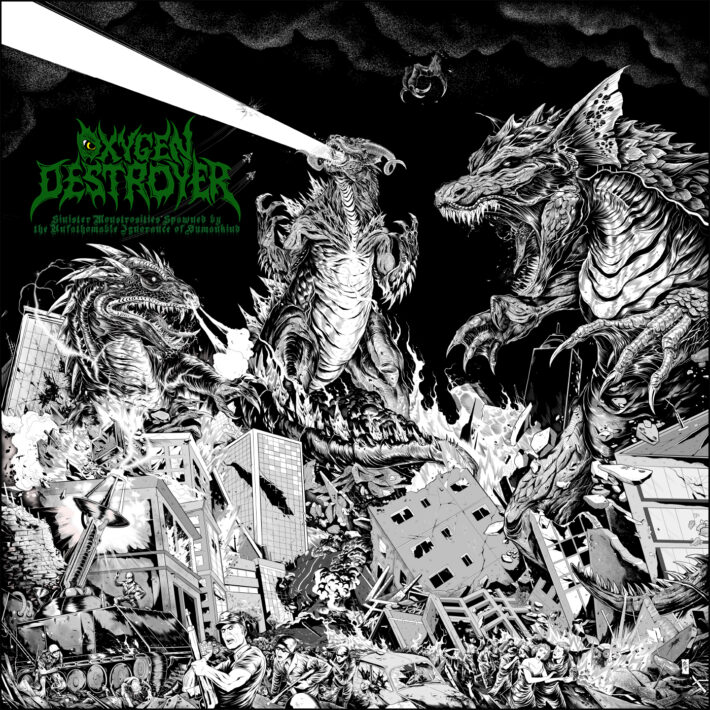 I’ve never really been into Kaiju films. Pacific Rim bemused me, but didn’t awe me. Never bothered with King Kong, Mothra, or anything like that. When I first heard of the band Oxygen Destroyer, during the days of their first full length release Bestial Manifestations Of Malevolence And Death, I thought that the name of the group was just a fun death metal fancy. It was otherwise. From their name to their aggression, Oxygen Destroyer live and breath their giga-monster influence.

Oxygen Destroyer have been kicking around since 2014, and are releasing their second full length album, Sinister Monstrosities Spawned By The Unfathomable Ignorance Of Humankind, on Redefining Darkness records. Since saying the album title takes more time than actually listening to the record does, I’ll be referring to this as simply Sinister Monstrosities from now on. Oxygen Destroyer take a kitchen-sink approach to extreme metal. Their main sound is firmly death metal, but plenty of thrash influences are jammed into this short record. Every note trips over itself to be faster and louder than the previous note. References to old films I’ve never seen fill up the only breathers on the record.

For a record this focused on aggression and passion, the riffs on Sinister Monstrosities surprise me. The gargantuan, buzz-saw guitars lead the charge through this record with plenty of great moments from beginning to end. Death metal chugging and solos that don’t need to exist plague the record, but even those descend upon the listener with a fiery vigor.

That being said, you don’t listen to Oxygen Destroyer for a stunning technical display. The band do play all of their instruments with commendable talent, but the album truly is as advertised: you enter for absurd energy first and foremost. This is music for Godzilla to workout to. Who cares if the tracks get repetitive, your ears will be filling with too much blood to notice. I do have some issues with Oxygen Destroyer, but the band’s talent and energy always save the day.

The higher the ascend, the harder the fall. Sinister Monstrosities doesn’t make it to the thirty minute mark, which makes all filler on this more confusing. Maybe I would appreciate some of the quiet passages more if I knew all of those old kaiju movies better, but as it is Oxygen Destroyer have added unnecessarily large pauses to their fast-paced death/thrash album. While variety sounds like a good idea, in practice I trip over myself and the energy of the record resets every time one of these weird interludes happens. On a different record, they would be fine. As is, it feels like someone sneaked cough syrup into a peanut butter and jelly sandwich.

The problem with leaning on aggression and blowing your listener out of the water is that it’s less effective on repeat listens. While I never stopped enjoying Sinister Monstrosities, it definitely sank into the radioactive mud over time. The same issue occurred with Bestial Manifestations. While I’ll return to Sinister Monstrosities plenty of times, and have done so with the debut release, they’ll never sound as good as they did the first time. Given Oxygen Destroyer’s approach to their sound, that may just be a given. I’ve also never felt the urge to return to any monster flick, so maybe others will find more staying power than I did.

Oxygen Destroyer came like the wind, like the wind possibly damaged your ears in the wrong circumstances, and like the wind was gone. While many of the same issues of Bestial Manifestations remain on Sinister Monstrosities, Oxygen Destroyer have done a fantastic job of evoking the blood-soaked rampage of the monsters that inspired them. I’d recommend this record to anyone who has ever attempted to headbutt a brick wall, and to anyone looking for some over-the-top fun.

You need to add a widget, row, or prebuilt layout before you’ll see anything here. 🙂