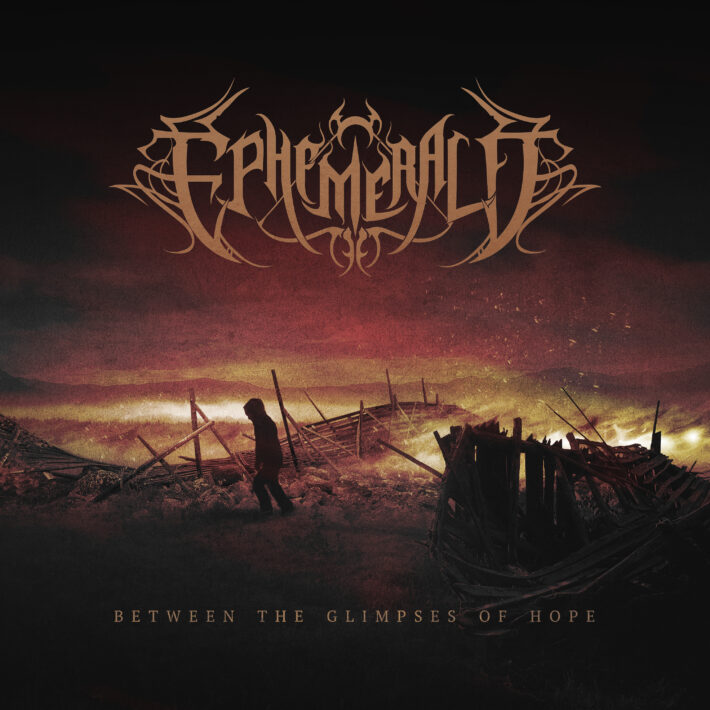 Between the Glimpses of Hope introduces the world to Ephemerald, a Finnish melodic death metal band. This band has released nothing but singles so far, all of which appear on their debut. This record appears to have undergone close to a five year writing process. Ephemerald eschew the doom influences that sometimes dampen the energy of melodic death metal releases, and instead push forward with the relentless fire that has made similar bands such as Aephanemer successful in recent years. Ephemerald also blend folk metal influences into their music as well, in a manner that calls back to Orphaned Land or Aether Realm. The promotional material calls this “epic yet furious and straightforward metal music from the hearts of its creators,” and the stars must be shining in a particular way tonight because this description feels mostly accurate.

Ephemerald manage to keep a high energy level throughout Between the Glimpses of Hope, to the point that it’s almost a problem. The death metal passages consist almost entirely of headbangeable moments that feel as if they are continuously accelerating towards a brick wall. But it’s death metal. That’s almost expected. What wasn’t expected was the driving energy of the folk elements and the quieter passages. This could have been a problem. The constant pressing forward could have tired out the listener. However, Ephemerald stopped just short of being an exhausting band due to some excellent metal songwriting and fiery riffs.

The riffs on this thing. On first listen, I was caught off-guard. Subsequently I’ve known what to expect, but I still can’t help but smile. These riffs aren’t generally complicated. They instead serve the greater song. They are usually simple enough to be catchy, fast enough to keep the energy up, and gone before they get boring. There is a lot to this music, good and bad, but the first thing that caught my attention and the aspect of the songs that will keep me coming back are the well-written, yet unobtrusive, riffs.

Outside of the riffs, this is just plain well-written music. Ephemerald know exactly when to pause for just a moment, and exactly how long to pause for. This never lowers the energy level, all it does is keep the listener engaged and prevent the songs from becoming formulaic. Well, mostly. Ephemerald draw from a ton of different genre influences, but their songs don’t sound that varied from each other with some exceptions such as “All There Is.” As such, it would have been easy for Between the Glimpses of Hope to get bogged down in muck and for all of the songs to blend together into mud. Instead, everything feels sharp.

The songwriting isn’t perfect, though. There is a technique I’ve heard of called a “Manilow Moment.” This technique involves taking your melody, chorus, or riff, repeating it enough that it’s in the listener’s mind, and then repeating it with the key raised a step. Ephemerald lean on Manilow Moments quite a bit. I don’t know if they’re raising the key by exactly a step every time, mainly because I was too busy enjoying listening to the music to try to figure it out, and they don’t set it up the same time. However, this could be something that wears the listener down over time could give the record less replay value.

It’s probably clear by now that I enjoyed this record a lot, but not everyone will. Between the Glimpses of Hope falls into the cracks between the genres. It has plenty of prog elements which may turn off fans looking for riffy melodeath and nothing else. However, this doesn’t make Ephemerald a prog metal band. Prog fans may also leave this record looking for more. This record is purely for death metal fans who are into tight leather pants and intricately detailed maps about the homes of dragons, and the farther you get from that description the less likely you are to like this.

Keep an eye on Ephemerald. Between the Glimpses of Hope may or may not be the success it deserves to be, but it’s only a matter of time before this band breaks through. Sure, there were some issues with the album, but I didn’t care when I had so much fun listening to it.