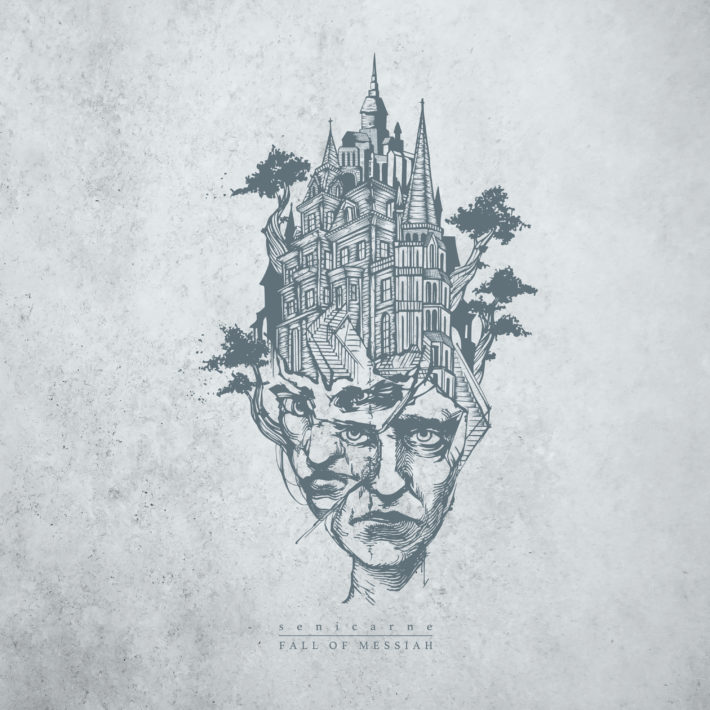 Fall of Messiah is a French post-hardcore and math rock band who have been around for a while now. There are trappings of more violent genres, such as harsh vocals and aggressive drumming, throughout Senicarne, although they often seem lost in the distance. For metal-adjacent music, this can get more quiet and reflective than the listener may be used to. At their worst, both of those genres can be a bit wandery and bland due to the overindulgence of their artists, but Fall of Messiah hopes to avoid this problem with some experience and song-writing prowess.

I was entirely enamored by the atmosphere of Senicarne. Good for Fall of Messiah, because they rely entirely on that atmosphere to keep things interesting.  The guitars serve as the main instrument more often than not, the drums keep the music from falling apart into grey mush, and everything else provides supporting flavors for those two foundational elements. Fall of Messiah seems to know just about how far to push their luck, as I found myself teetering on the edge of getting bored without actually taking the plunge.

This music, at its core is extremely simple repetitive, and that ends up being a strength. Most riffs are stripped down to their minimum, allowing them to be remembered the first time you hear them even as the band drills them into your skull over and over again. For this sort of music, this makes sense: the riffs aren’t really the point, they’re just there to provide a setting for the rest of the noise.

Repetition also serves an important purpose to Senicarne. As those riffs are repeated, you will know how they sound, and how they should sound. Thus, when any change occurs, it’s like going from a sauna to a freezing lake. And changes are plenty. I know this contradicts the repetition point that I’ve been…well, repeating, but it is what is happening in the music. The riffs and motifs are left on repeat as the side elements are free to fritter and evolve as the music demands. As this is a math-rock album (sort of), Fall of Messiah are able to create large, wrenching changes in their sound with relatively small movements. That simplicity disappears into the mist as well, as the flavoring elements of the music are allowed to do what they want.

The drums stand out as a plus. A lot of lesser post-metal and post-hardcore releases leave the drums to be background noise, as the guitars or vocals take center stage. Here the drums share as much glory as anyone. A lot of lesser math-rock releases contain drumming that is too complicated for its own good. Here, the drummer knows when to settle into a groove and when to be flashy. This music would falter far more often than it does without the driving force of the percussion.

Unfortunately, Senicarne still falls into that rut that all genres starting with “post” gravitate towards. Sometimes Fall of Messiah gets lost in their groove and loses their connection with the emotion of the music. When this happens everything else crumbles and turns to mud. Once the album has been turned off and I’m recalling it, all that sticks out is the atmosphere and that mud. All of the record’s positives can fall by the wayside. It’s unfortunate that an overwhelmingly competent album can be completely derailed by some minor moments, but it’s a bit like a dried cockroach on your hamburger. Doesn’t take a lot to make a lasting impression. Additionally, once one starts to roll in mud, it takes some effort to get clean again. The second part of the album ends up dragging on too long as a death of a thousand cuts causes it to stumble in its path.

Overall, Senicarne falls short of being great. Fans of the genre will want to check it out as the good parts of this album are dynamic and entertaining. But this won’t convert anyone who isn’t already at least a bit curious. Even though I have my issues with Senicarne, Fall of Messiah made an extremely respectable album and have accomplished everything they could have set out to do.