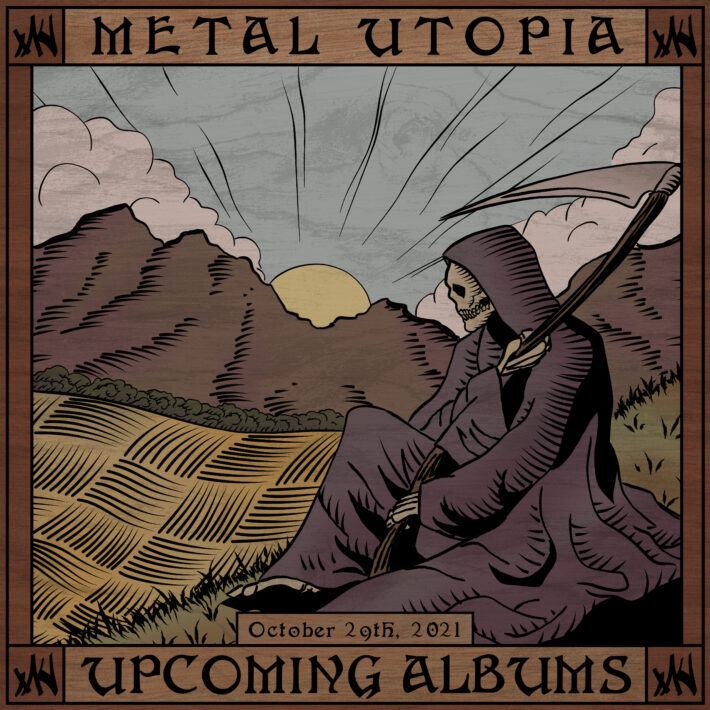 I occasionally indulge the kind of tech-death that feels more like full-force incomprehensible sweep-picking turbowank rather than any semblance of songwriting. It might be harsh to describe First Fragment as that, but if they are, they’re top shelf stuff. I can’t wait to once again molest my ears and brain with that sweet sweet neoclassical shredding topped off with inhuman blasts and growls, garnished with the occasional samba intro.


It’s been a looong while since the last Jerry Cantrell solo record (since 2002). But the man is nothing short of a musical genius, and even neo-Alice in Chains is nothing to scoff at, so I’m sure this’ll be quality.


Toby Driver is another musical genius in my book and even if this is another instance of weird experimental new wave prog rock stuff, I’ll eat it straight up.


I’ve no qualms about labeling Helheim as underrated. They’ve been around the Norwegian black metal scene since the early 90’s, succesfully avoiding all the scandals and toiling away in the background. Now they’re at their 11th record of high quality viking metal which took a progressive turn somewhere in the 2000’s, with great results might I add.


While I do generally attend Archspire for the 400 BPM shenanigans, the singles show a lot of growth in the songwriting department. I think this one’ll make quite a mark on the tech-death scene.


Sunless’ 2017 debut “Urraca” was quite the treat of dissonant death/black metal. I expect no less this time.


I find fans of Be’lakor to be quick to proclaim them the current kings of melodic death metal. While I wouldn’t necessarily go that far, they definitely get a seat at the table of the subgenre’s how-it’s-done elite. I expect no less than topmost quality once again.


I’m probably not at all unique in generally not caring much for Mastodon after Crack the Skye, but they’ve earned enough respect from me to gave all their new releases a spin (and that’s a lot of respect). Expectations aren’t high, but I wouldn’t mind a pleasant surprise.


While their position as supreme Swedish rifflords has been challenged by other acts (say, Spelljammer), they’re not ones to let up and continue to release quality albums. This one’s certain to keep up the pace.


Some people accuse Steffen Kummerer as a man with no ideas of his own, saying Obscura is basically a ripoff of the late Death sound and Thulcandra equally ripping off the Dissection sound. But I say what the hell. Even if it were so, the output is quite decent and it’s not like the two bands are around to keep doing their thing so might as well indulge oneself.


I don’t really believe in the “guilty pleasure” concept but if I did, Beast in Black would be one of mine. One can’t not appreciate the utter shamelesness with which they indulge the cheesiest bits of heavy/power metal, ballads and all, with full conviction and almost unmatched energy.

Power metal is one of my favourite subgenres. The energy, the enthusiasm, the faster-than-light BPMs and the overly sugary riffs, all these ingredients make a type of music that never takes itself too seriously and at the same time looking like it does. All of such things were the last two Beast In Black albums and after such a bleak year, I strongly hope this next work will keep the circus going.


The tenth album of this seminal Italian heavy metal band arrives preceded by the usual sets of goofiness, theatricality and pop satanism. And after more than 40 years, it’s just what we’ve come to expect and love.


Rutger is looking forward to Ghost Bath’s Self Loather: