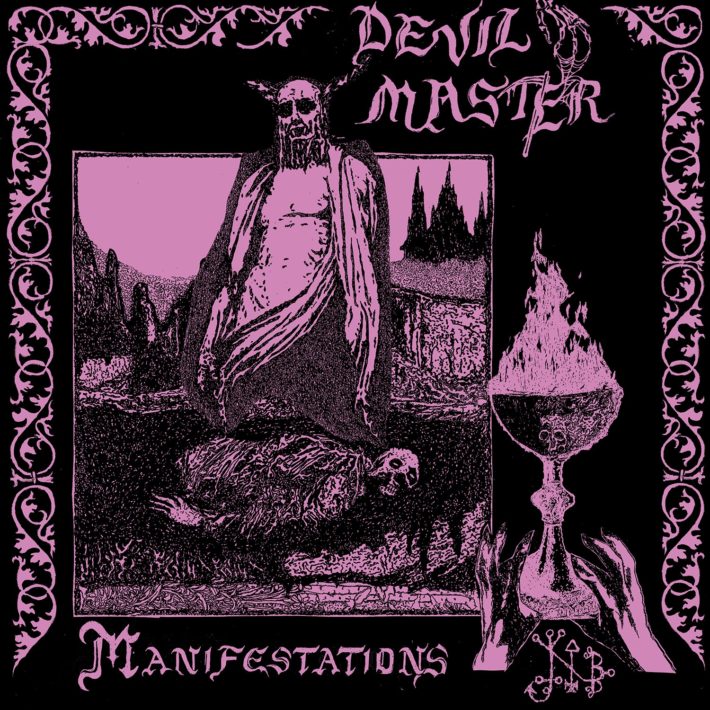 I was so happy when I saw this on our release schedule. I first heard Devil Master about a year ago on a youtube channel that deals with underground punk releases (check it out, the selection is great – No Deal). They released a self-titled demo in 2016 and “Inhabit the Corpse” EP a year later, and let me tell you I was immediately blown away. Now the band’s talent has finally been recognized and signing for Relapse will hopefully get them the attention they deserve. Thus, both these old releases were compiled, remixed, remastered and released as “Manifestations”.

Devil Master’s aesthetic is inspired by what is now commonplace interest in heavy music towards the occult, witchcraft and horror. The saturation with this theme often ends up as a bland repetition, seen-already and plainly not that interesting. But Devil Master’s approach gives full justice to the subject matter. I believe they struck a firm balance between tongue-in-cheek halloween spookiness and genuine horror atmospherics. It’s not overtly serious stuff, but it doesn’t mean it isn’t properly gnarly.

The music style lends itself to this perfectly. The foundation is proper lo-fi hardcore punk, with some death rock influences thrown in for good measure, coupled with a decent slathering of early black metal elements and imagery. The production works great towards this purpose. I was afraid when I saw that a remix was done, that it might ruin the rawness of the amateur production of earlier releases. But it did an awesome job, not much has changed except some necessary technical corrections and overall improving. The original sound was properly preserved. It still sounds like grimey emanations from some dirty garage by cultish punks.

I’ll want to specially mention the guitar. The player properly works with crunchy hardcore riffs, but the magic happens when he switches to playing melodies or some balls-to-the-walls solos. Thing is, at that point he seems to switch on a whammy pedal to pitch his tone up by doubling the octave. This isn’t very common in metal, nor punk for that matter. Dimebag famously used it for a bit after the solo on “Cowboys From Hell”, and Tom Morello sometimes uses it to achieve his mad sounds, but other than that I can’t think of any. Makes sense – metal drives itself to ever lower pitches nowadays, why would anyone want to go up? But here it works wonderfully. The guitar tone combined with often batshit unhinged playing sounds like some mad witchcraft in the works, evil spells flying across the room.

The rhythm section shouldn’t be forgotten, as they drive a consistent pounding punk fury, keeping the stakes high as the eldritch ritual continues, while the unexperienced cultists start to doubt that they might’ve gone a bit too far. And then come the vocals, a proper angry black metal rasp, buried in a dank haze of effects, sounding like they recorded a ghoul howling from within the crypt. The overall sound achieves much, and even has that slightly psychedelic vibe that garage rock and punk bands often, if sometimes inadvertently accomplish. Fits with the theme – the devil’s realm is confusing and incomprehensible to mortals. The horror setup is obscured in a haze, adding to the mysterious murk that so many early black metal bands went for.

Like I mentioned, this release is a compilation of two previous releases, and it’s worth mentioning the slightly different approaches between them. The second part, “Inhabit the Corpse” is much wilder and faster than the first, as if the summoning has been completed and now the blood orgy of the sucubbi takes place. The punk speed and metal elements are doubled down on, and there’s even a whiff of old school heavy metal. That doesn’t mean the first part isn’t good – it’s slower and more atmospheric, which only contributes to the band’s range of songwriting. Overall, this is a band that fully deserves being signed to Relapse. It’s got it all, the rawness, the speed, the attitude, the atmosphere, all packaged into a no-bullshit hardcore punk sound. The band’s got a bright future ahead of themselves, so I suggest you hop early onto this terror train.

Tracklist:
1. The Devil Master (Devil is Your Master)
2. Distorted Paths / Fear the Future Gleam
3. Failure to Die
4. Sex with Succubus
5. Inhabit the Corpse
6. Obscene Charade
7. Gates of Pain
8. Blood On My Shroud