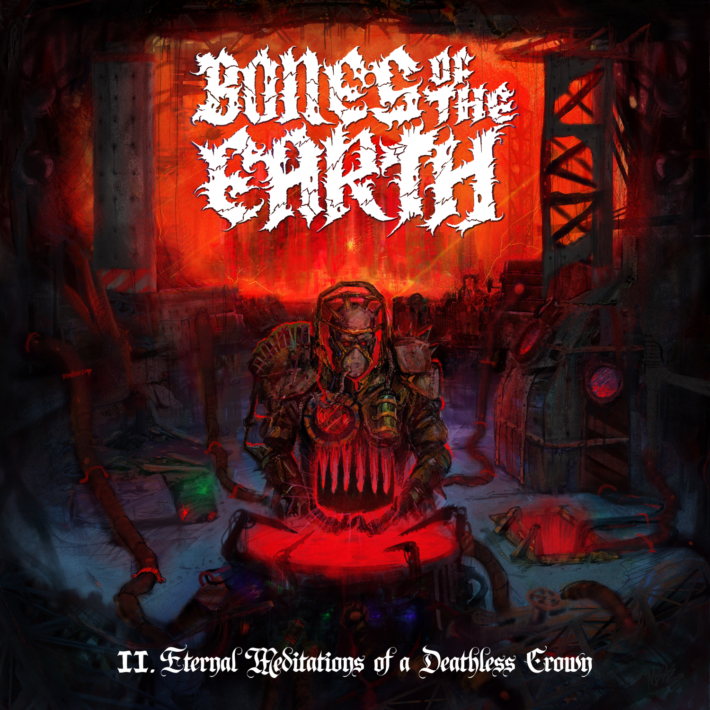 Concept albums are treacherous. How much does the music sacrifice for the story, and how much does the story sacrifice for the music? Doubly so for multi-album stories. If the records don’t hold up on their own, then they aren’t worth starting in the first place, and if they don’t complement each other, then there is no point to having them together. Evaluating this sort of release on its own may be casting it in its worst light. But if an individual album doesn’t work this way, then a more favorable light won’t save it.

II. Eternal Meditations of a Deathless Crown follows, somewhat obviously, I. The Imminent Decline of Human Spirit as the second full-legn release from Arkansas stoner/sludge group Bones of the Earth. This release apparently involves a grand story from their debut album, and focuses on a somewhat intricate plot involving cycles of civilizations, an ancient magical relic, and other such topics. I did not pay attention to the plot at all beyond the blurb summary I was given, so if that’s what you’re here for, you’re on your own. Musically, Bones of the Earth sound like a fusion of The Ocean and Sleep. But there is a reason that this group doesn’t have the acclaim that those bands do, and it’s not just age.

Before we get to that, there are some impressive elements here. The continual, evershifting riffs constitute the clear core of Eternal Meditations of a Deathless Crown. Through all of their surprisingly varied styles, these constantly interesting riffs kept me enjoying the record. These riffs always kept the music moving forward in a slow but relentless manner, almost never allowing the sound to wallow when they are present.

Although I’ve called Bones of the Earth a stoner/sludge band, their musical style goes all over the place. The beginning of “Inoperable” contains some delightful Sabbath-ian blues that sounds as fun to play as it is to listen to. Every listen, I found myself surprised at how much variety this band squeezed into 34 minutes. They sound confident in everything they try, and despite my issues with Eternal Meditations of a Deathless Crown, I still enjoy the record.

This record doesn’t just go all over the place, it does so to its detriment. Some of the decisions Bones of the Earth made sound downright bizarre. “Machine Rising,” for example, works fine as a somewhat boilerplate sludge track. And then it enters another section at around the four minute mark. This second half isn’t necessarily bad, it just makes the track wander on forever and isn’t interesting enough to justify its existence despite the guitar solo. Then the song ends with half a minute of sounds that don’t add to the previous track at all. “The Empire Never Ended” follows its title a little too well, and has a lot of passages that just don’t fit. Everytime I think the track has reached a conclusion, the song either continues or goes into another completely unnecessary section. The ending chords and subsequent atmospheric noises last for almost a minute and then just slide on into the final track. Nothing happens during this time.

The only thing I can think of is that these moments are important story moments, but even in that case they are still a detriment to the music. And it’s not just those moments. In combination with some of the more aimless song structures they add up to an album that doesn’t musically know where it’s going. I like that the album doesn’t last for too long, but this short album casts away some really good ideas that could have been explored further in favor of sections that had no positive impact on me whatsoever. Worse, the album ends with another one of these wasted moments, leaving an awkward exit as the final impression.

Bones of the Earth are a talented and creative band who don’t sound like they’ve clicked yet. Plenty of riffs and passages keep this record enjoyable, but they are all surrounded by music that does not work the way that Bones of the Earth may have intended. Hopefully this band will grow with time, but for now, check this out if you’re looking for some good riff-driven sludge or a grand story. Just accept it for what it is.

Click here to visit Bones of the Earth’s Bandcamp