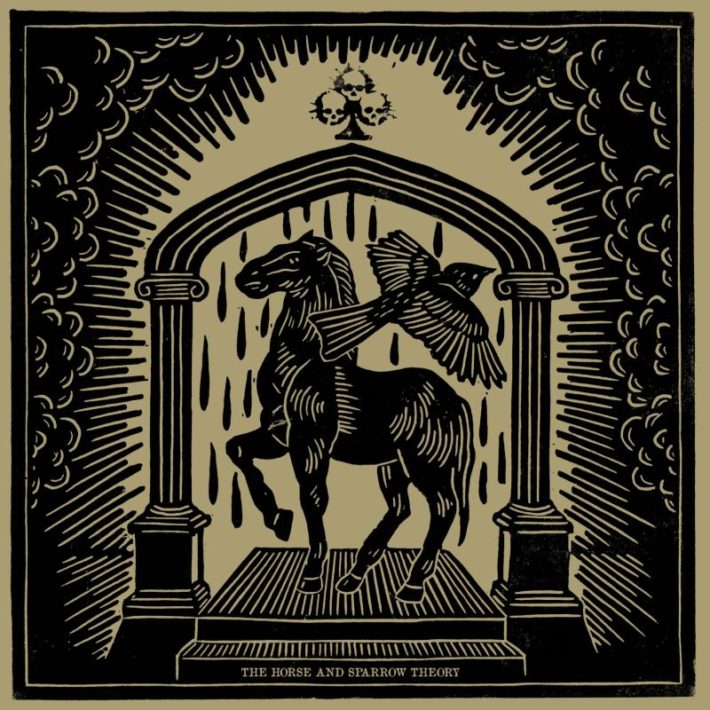 So here I am with another Swedish crust ordeal. A couple weeks ago I reviewed Martyrdöd’s new album, “Hexhammaren”. In that review I lauded the virtues of Swedish crust, its strong legacy but also the creativity and quality of its contemporary scene. Victims and their newest record are just further proof of this. I can draw many parallels between this record and Martyrdöd’s one, both musically and lyrically. But there are core differences that show how the Swedish scene can create huge variety within such a deceptively simple style.

I’ll first talk about the lyrical themes and then the music on “The Horse And Sparrow Theory”, and I proceed this way because I believe they are the two fundamental elements that compose the whole of the record. Many metal fans understandably don’t care much about the lyrics (honestly neither do I a lot of the time), either because they’re usually properly secondary to the music or because, well, you just can’t understand them through the growls and shouts. This is absolutely not the case here. Not only are they, as I said, very important here, but Victims make sure to get the message through to you even if you never intended on opening the lyrics sheet.

To quote the band themselves, their goal is to “deconstruct the current socio-political climate, bleak outlook of mass class division, industrialization, and the self-absorbed pursuit of greed and corruption”. There’s certainly dime a dozen bands trying the same today, but few do it as effectively as Victims here. The most pertinent issue they’re dealing with here is I believe climate change (which is certainly related to the other ones), the human-made process which has a real chance to literally destroy the planet and our own and many other species. The bleakness and despair of this outcome is hard to ignore through the music, whether it be the repeated lyric on “The Birth of Tragedy” – “The ocean is dead”, or the sample on “We Fail”, a clip from Stephen Cheney’s lecture, where the retired US Armed Forces Brigadier General speaks of the military’s understanding and awareness of climate change, who consider it a veritable future threat and categorize it as a “threat multiplier”, a factor certain to bring violence and chaos. This drives home the point of the tragedy of climate change not only by the fact that the most powerful global actors are taking it seriously and preparing for it, but also by the fact that such actors are divorced from a collective effort to prevent it, rather opting to control it via coercive and oppressive means.

But the compelling narrative of this record would fall flat if it weren’t for the musical way in which it’s expressed. From the opening riffs of the opening title track it is very much clear that whatever Victims are making these songs about, the stakes are high and the outcome is unclear. Unlike for instance Martyrdöd who deal with similar subjects using a much more furious, sharper and melodic tone, Victims are set to crush spirits. The ambiance is almost that of a doom metal record. This is also helped by a very hefty, low-end laden tone and some sombre melody-work. The lyrics pack an extra punch when being conveyed by the barking, but just clear enough vocals, and also when perfectly arranged with the rhythm so that the punchline actually punches, such as the marching mid-tempo second half of “We Fail” or the chorus on “Revenge of our Fathers”. All in all, superb songwriting.

There’s also another important element that puts the finishing touch and emphasizes everything I’ve mentioned up to this point, and that’s the fact that this is a relatively short record. At just about 28 minutes, Victims don’t waste a second. They don’t bog down the message with needless proselytizing or lengthy arguments. There is no time for that. The situation is dire and urgent, and no words need be wasted except for this short, but immensely resonant proclamation, just as the impending catastrophe will not spare you a single moment before imminent ruination. The planet’s patience runs thin. I’d almost liken the record to a political pamphlet if it weren’t so direct and sincere. “The Horse And Sparrow Theory” is a perfectly crafted proclamation of facts that we so adeptly cover our ears to ignore, and it carries the strength to hopefully pierce through our mental barricades.

Tracklist:
1. The Horse And Sparrow Theory
2. The Birth Of Tragedy
3. There’s Blood On The Streets
4. We Fail
5. Fires Below
6. The Sea And Poison
7. Hell Is Full Of Good Intentions
8. Revenge Of Our Fathers