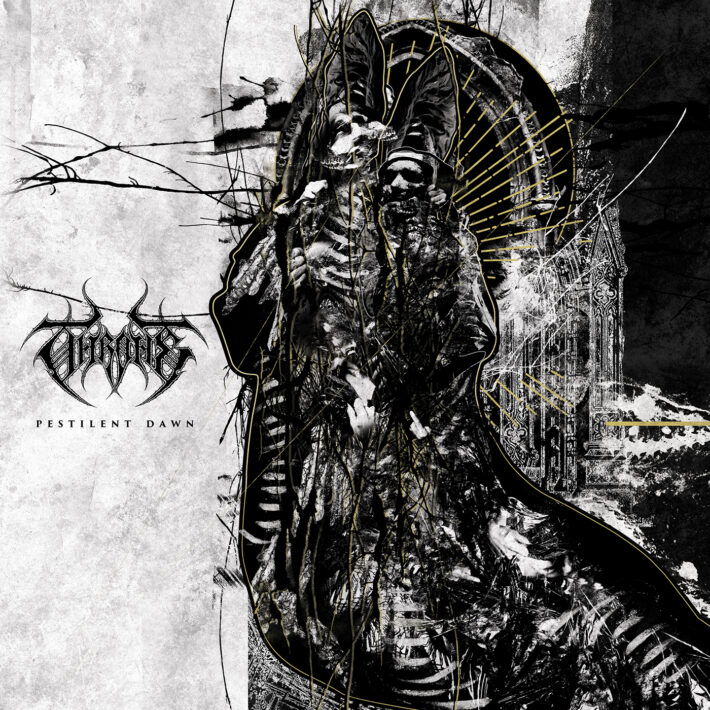 Even the purest ideals can become corrupted. Faith, hope, love – humanity has trampled each one into the dust in favor of more nefarious pursuits. Within us there is a dark, hollow void that flinches from the light and embraces the darkness. Blackened death metal outfit Throne captures this sentiment on their debut album Pestilent Dawn. Whether Throne is critiquing organized religion or ushering in the end times with apocalyptic imagery, the band buries their competition in the death metal arena.

Throne began their foray into the metal world with their EP Altar of the Undying in 2018. The band turned heads with their brand of blackened death metal, and this excellence is continued on their debut album Pestilent Dawn. There’s clear influence from bands like Suffocation and Behemoth, but Throne is a breath of fresh air at a time when every other band seems to be an old school death metal clone. Not that there’s anything wrong with traditional death metal – but it’s hard to separate yourself from the masses if you don’t deviate from the status quo. This, coupled with the top notch mixing and production quality, makes Throne a force to be reckoned with.

Pestilent Dawn begins with the simplistic “Intro,” a pathway that fades in with an ominous guitar tone and features dynamic drumming by percussionist Kollin Perpignani. The drums on Pestilent Dawn are one element that helps elevate Throne above their contemporaries. Then it’s on to the next track, “Amongst the Sinners, They Came Forth.” Vocalist Nathan Barnes bellows out this line with gurgling enthusiasm, making it one of the more memorable efforts on Pestilent Dawn. The guitars on this track, led by Joe Kesselring, crunch through riff after riff like a Sherman tank crushing Nazis beneath its armored treads.

“In the Midst of Chaos” worms its way into the listener’s consciousness with a captivating riff, but this only hints at the auditory devastation that is yet to be unleashed. In its 4 minutes of run time, it doesn’t let up for a moment, pummeling the listener with wave after wave of unrelenting death metal brutality. “And They Shall Weep” picks up where the previous song left off, pelting the listener with breakneck drumming and swelling riffs. It’s like sailing on the ocean in a violent storm, only each wave smashing against the hull is another serpentine riff, twisting and uncoiling with deadly accuracy.

The fury of the storm presented in “And They Shall Weep” fades away into the instrumental “Eternity in Mourning.” This acoustic piece is the aftermath, when the survivors of a catastrophe search in vain for their friends and lovers. It’s simple yet beautiful, a momentary lull in the calculated violence that is Pestilent Dawn. However, another storm is brewing on the horizon. Throne returns to its death metal madness with its eponymous title track. “Pestilent Dawn” recalls a swarm of locusts poised to devour entire fields of vegetation. It ends with guitar work that accentuates the song’s frenzied tempo and aggressive output.

“Born of Death” begins with atmospheric riffs that evoke the band A Hill to Die Upon, but the song soon transitions into a swifter pace. Throne reverts to the opening riff again at the end of the song with a well-executed ritardando.  “Beyond Malice” is notable for its vocals, including a guest performance from Clint Franklin of Recorruptor. The black metal shrieks pair well beside Barnes’ death metal growls. The central riff of this track is more akin to doom metal than death metal and heavier than a neutron star, the densest known object in the universe. The song’s finale, featuring this weighty riff served forth upon a platter of decadence, delights with its stripped-down sonic simplicity.

“All Creation Wept” features ferocious drumming and thrashy riffs, including a guitar solo from guest performer Kris Finison of Dagon. The crunching riffs are reminiscent of Suffocation’s Effigy of the Forgotten. The ending, framed by Finison’s solo, fades into the final track, entitled “Humanity’s Dusk.” The closer is…an instrumental track featuring ambient noises and almost unintelligible human voices? Unlike the previous “Eternity in Mourning,” however, it falls flat on its face, lending neither credence nor consequence to Throne’s otherwise flawless death metal assault. It’s baffling that Throne didn’t simply end with “All Creation Wept” and strike this other atrocity from the track listing. If the band wanted commentary on the imperfections of humanity, they achieved their aim with this dud.

Regardless of the ending, Throne delivers a sonic juggernaut. It takes repeated listens to capture the album’s grandness amidst its frenzied pace and heartless cruelty, but the verdict is clear. Throne has everything a band needs to catapult to greatness, and if they can maintain this level of musicianship, the sky’s the limit for this death metal outfit from Jackson, Michigan. Pestilent Dawn is an album of the year contender and a tour de force of blackened death metal brutality.