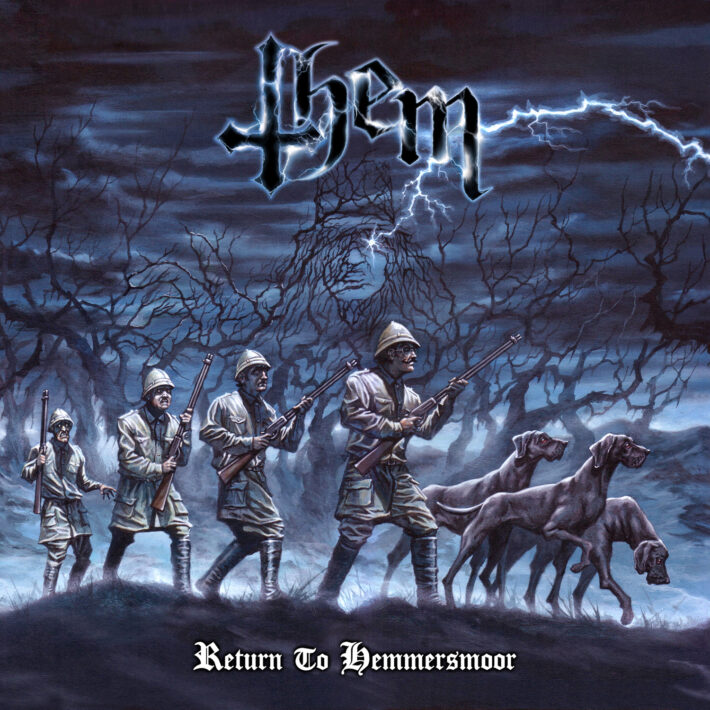 The records that don’t quite make it fascinate me the most as a reviewer. Masterpieces provide the best listening experience, of course, but talking about them gets boring. I can only say that something sounds amazing in so many different ways before it’s time to shut up and let the music speak for itself. On the other end of the spectrum, trainwrecks like Illud Divinum Insanus can be talked about and inspected endlessly, but in order to review one I need to listen to it to the point of aural pain. Connecting these two extremes sit a series of albums like a column supporting a ceiling and resting on a foundation. These albums reach for glory, but instead demise due to their own weaknesses like a tragic hero of old. In that column, you will find what defines music at its best and at its worst through exclusion. In that column, you will find Return to Hemmersmoor.

Return to Hemmersmoor is the third album by heavy metal band Them, who named themselves after the third album by heavy metal band King Diamond. Them started out as a tribute band to the falsetto masters, and their sound is still at most a step away from their inspierers. This record apparently resolves the story started by their previous two records, Sweet Hollow and the somehow-real album named Manor of the Se7en Gables. I do not well understand the overarching plot of the trilogy, although Them were kind enough to include some excruciating spoken word plot points in between some of the cheesiest music that I have heard this year.

Ok, that may have come off the wrong way. When I say that this sounds cheesy, I don’t mean it in a bad way, necessarily. A lot of music is cheesy. Rhapsody of Fire is cheesy, and they’ve made some of my favorite power metal records of all time. In fact, comparing Rhapsody of Fire to Them highlights exactly where the younger band went wrong. Although both bands will regularly serve nachos without the chips, Rhapsody of Fire (at least in the Luca Turilli days) would do so with stellar songwriting and top-notch performances. When Rhapsody of Fire wanted to give you a cringeworthy spoken word section, they’d do it with gusto and follow it up with an expertly written guitar solo, or beautiful soft interlude, or anything to drive the sound forward. When Them give you a cringeworthy spoken word section, it marinates and gets followed up by something that never quite washes the taste out of your mouth.

So they don’t quite manage the quiet moments as good as Rhapsody of Fire. But they have some very impressive choruses. “Free,” for example, manages to keep the energy needed to hold this type of music together, and does it with a catchy and fun sound. However, the track ends with a bizarre interlude after dragging on for too long. “Waken” starts with a pretty good guitar solo that doesn’t feel related to the somewhat bland quiet section following it. Again, this builds to a good chorus, but by then the song feels like it has dragged on forever due to its disjointed nature and some frankly uninteresting passages.

So what about their namesake, how do Them compare to them? Well, King Diamond ooze with personality, while Them ooze with King Diamond’s personality. King Diamond give them albums atmosphere, whatever else you can say about them, and at the top of their sound sits that satisfying falsetto. Them have neither of those virtues. They aren’t bad musicians, but they don’t have the level of virtuosity needed to rest on that. Their atmosphere doesn’t come close to what it needs to be, as it varies between bland and frustrating.

Not every album can be great. Them’s the breaks. On their third release, Them have crafted a record where the failures are just as interesting to me as the successes. Return to Hemmersmoor has some good solos, some pleasant riffs, some catchy choruses. If your King Diamond heroin feed has run completely dry, there might be something here for you.